One man’s efforts to push back the new version of the HIV epidemic. 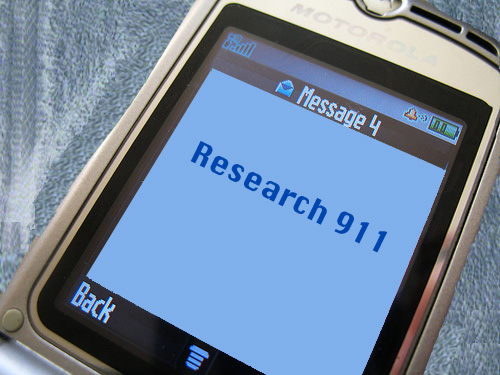 Emergencies arise for a researcher who studies the behavioral aspects of HIV infection. [Credit: Rakka, flickr.com. Compiled by Carina Storrs]

It was the summer of 2008, and HIV researcher Perry Halkitis finished working out at the gym and went to the locker room. He checked his phone, and saw a single text message: “Research 9-1-1.”

Research doesn’t often evoke thoughts of emergency, but when you work closely with potentially troubled young people at risk for HIV and other problems, it’s not so unlikely. Halkitis raced to the New York University building where his research team was trying to console a 21-year-old man participating in a risk behavior study called Project Desire. The man had no family and a troubled past — his most recent relationship ended when his boyfriend put all his belongings on the front lawn and set them on fire. He also had made a serious suicide attempt. And now, while Halkitis was at the gym, the young man’s HIV test had come back positive. He was hysterical.

With Halkitis’s help, the team soothed the man and brought him to an emergency psychiatric unit for the night. It wasn’t until after the crisis had passed, when they all convened back at NYU to discuss the evening’s events, that Halkitis’s ability to blend research and reality showed. “You can intellectualize this as much as you want,” says Rob Moeller, an associate research scientist at Halkitis’s NYU center. “You can play around with the stats and graphs and go to conferences, but at the end of the day, it really is human lives.” Halkitis had them simply sit and talk, allowing that anything expressed in the wake of something so traumatic — fear, anger, sadness, guilt — was valid and important.

Halkitis has worked as a behavioral HIV/AIDS and drug abuse researcher at NYU for more than a decade, but he talks much more readily of his role as a mentor and teacher, of scenes like last summer when his earlier experiences as a young gay man at the height of the AIDS epidemic lend him authority when training his team. He all but ignores the last decade, during which time he has put together a wide-ranging opus on risk-taking behaviors, drug use — he just published a book on methamphetamine addiction — sexual health and gay culture.

Strange, at first, to gloss over a life’s work, but it fits. Halkitis is weary of the past, when he watched scores of his friends die of AIDS and when HIV prevention involved little more than stern commands to use condoms. The present is frustrating, because despite almost 30 years of experience, the rates of HIV transmission among certain subgroups — young gay men and some minorities, specifically — are shockingly and convincingly on the rise in New York City. Halkitis prefers to think about the future, when he hopes the new generation of HIV/AIDS researchers that he mentors will use some of his ideas to bring those rates down.

For Halkitis, HIV prevention isn’t about sexual health, or injection drug use, or even risk-taking behavior. It’s a combination of all the factors that might lead someone to not think about using a condom, or to think about it and dismiss the risks anyway. This is known as syndemics theory: the idea that overlapping factors or epidemics fuel a person’s actions and their consequences. It isn’t just one thing—people just aren’t that simple.

“You can’t separate some things, it’s just ridiculous,” he says. “HIV prevention is drug education is mental health. I think people are starting to buy that message. Gone are the days where we think that it’s just about HIV.”

Halkitis pondered several futures before settling on HIV work. He was pre-med as an undergraduate at Columbia University, earned a master’s degree in education from Hunter College in 1988, and soon afterward began his doctorate research at City University of New York in applied statistics and quantitative research methods. During the same period, though, he doubled as an HIV/AIDS activist, joining marches and protests with groups like the AIDS Coalition to Unleash Power (ACT UP).

He decided to meld them, and after a two-year stint working at Gay Men’s Health Crisis, he arrived at NYU in 1998, where he now directs the Center for Health, Behavior, Identity and Prevention Studies. CHIBPS justifies its complicated name by studying complicated behavior. Halkitis thinks the behavioral side of HIV/AIDS work, rather than just the basic science side (“Let’s just forget about the vaccine, it’s not going to happen,” he says, somewhat derisively) is gaining attention.

Halkitis and his team are currently launching a project aimed at addressing the behavioral patterns responsible for HIV infection and other problems. They will recruit 700 young gay and bisexual men between the ages of 18 and 30 who are HIV-negative at the study’s beginning and follow them for three years to learn about their mental health, patterns of drug use and sexual habits: the syndemics of HIV and risk taking.

Understanding what fuels risky, as well as non-risky, behavior could lead to better-tailored prevention efforts, Halkitis says. “Why aren’t we studying the guys who are constantly healthy and building prevention programs around their behaviors? Instead of doing what we’ve done for 20 years, looking at the risky guys and trying to build prevention programs around them. The safe people are doing something right — what is it?”

He acknowledges that the safe people might simply have safe, supportive backgrounds — loving families, good educations, smart friends. If that is the case, then prevention efforts should focus on simulating that type of support network for young people who don’t have it to begin with.

Halkitis says he is very close with his own family, including his younger brother, who is an auto mechanic, and his mother. He cites his father, who died in 1992 and was a Greek immigrant from a poor family, as the greatest inspiration in his life. In fact, Halkitis’s recent book on methamphetamine use is dedicated to his father, and Halkitis is regretful that his father did not get to see, as he calls it, the conclusion. He saw the beginnings of where his son was headed, though, when the academic, researcher life began to merge with the HIV activist life.

circumcision is absolutely the WRONG way to﻿ pneevrt HIV/AIDS.There was a study largely ignored by the media and the people promoting this practice, and this study showed that men who HAD HIV already were MORE LIKELY to transmit the virus to women IF they were circumcised, compared with men who were not circumcised.This is an incredibly important fact, especially considering that without condoms and better education, men WILL get HIV and continue sleeping around.circumcision = DANGEROUS.