There's a lot going on up in the sky 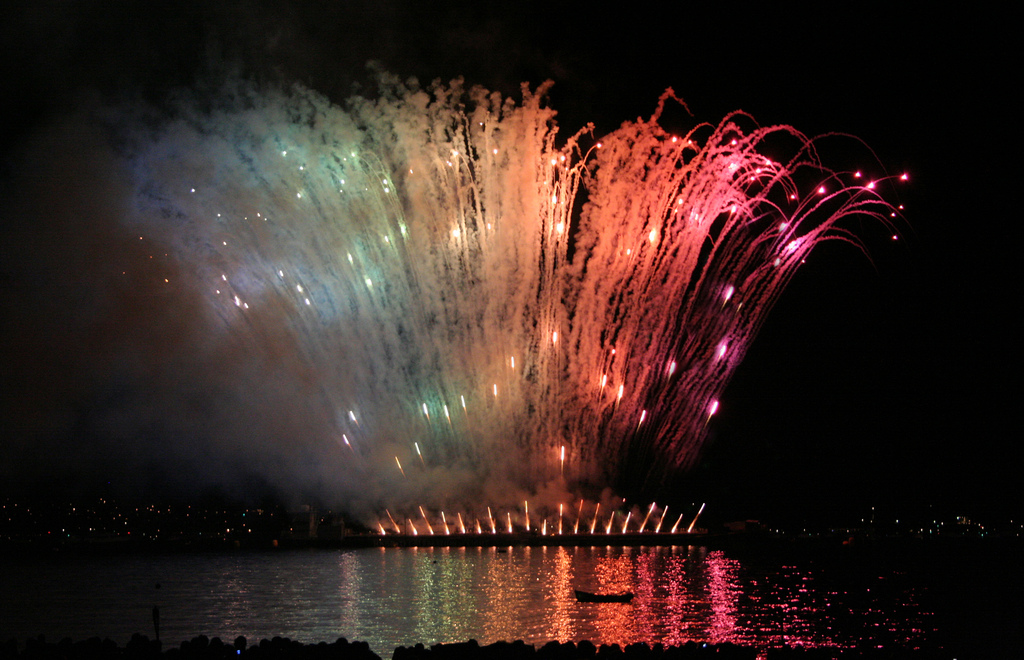 What makes a firework a firework? There’s the elation at the whine of the rocket as it makes its way high into the sky, and the unbridled excitement as it explodes into fountains of colorful sparks. Then again, that’s just my reaction to them. There are also the physical and driving properties of fireworks: The precise mixture of different components that help a firework keep its shape, stay aloft, form those gorgeous shapes, make those iconic sounds, and you know, go boom.

Since anyone reading this is probably keeping half an eye peeled on the quickly darkening sky right now, I think we’ll just focus on two key components: explosions and color.

The explosive force in fireworks is a mixture of volatile chemicals and minerals called black powder (aka gunpowder). It has been used in fireworks since the 11th century in China, when people first began to experiment with burning bits of ground-up rock in different containers. Ah, the evolution of pyromaniacs. The displays may have gotten more elaborate, but the basic principle hasn’t changed for millenia…well, at least one millennium. Black powder is made up of a few different components:

Sulfur is a fairly common mineral found around the world. Sulfur in fireworks increases the combustion rate of the material, and acts as an additional fuel for the fire.

And last but not least, charcoal or another type of carbon is the central fuel that makes the firework ascend into the sky.

Graphite is also there in very small amounts to prevent the risk of explosion (almost lubricating the material, so that unwanted friction doesn’t build up).

It doesn’t take much black powder to make a firework go ‘Boom!’ Consumer fireworks, (the kind you would use in your backyard) are only allowed to contain 50 mg of explosive material by law. That is approximately the same size as half an aspirin tablet. Display fireworks used by professionals can contain much more, and be much more dangerous (though they also look way cool).

The explosion isn’t the only fun part of a firework though. Colors are also a key part of the show, and they are created by burning metal salts.

Blue: Copper salts turn the fireworks blue. Blue is a pale color that can easily be lost in a dark sky, and copper is highly unstable at high temperatures, meaning that any blue fireworks have to be very carefully formulated.
Red: Strontium and lithium salts must be employed in fireworks in order to put the ‘red’ in Red White and Blue.
Green: Barium chloride burns green in fireworks.
Orange: Orange is made by burning calcium salts, calcium chloride or calcium sulfate. Who knew that the material that made your bones strong would be such a showman!
Yellow: Sodium salts of all sorts burn yellow — even table salt. I tried sprinkling some table salt over a flame, and found that the flame actually did burn more yellow. (Advice — use something that A. is not your hand and B. is not flammable or meltable to do the sprinkling. Also, don’t burn yourself, anyone else, or anyone’s possessions. In short: Don’t be stupid.)
Silver: Aluminum and magnesium compounds provide the bright brilliant silver light of sparklers.
Purple: The purple color one of the few that are made by actually combining two colors. Strontium salts (red) and copper salts (blue) are combined in different ratios to create different hues of purple.

Pyrotechnicians must take care when they are mixing the color components. Just a small amount of the wrong chemical compound (especially sodium) can really overwhelm paler colors like blue.

Hopefully this has helped to answer some of your burning questions about fireworks — now go out there and enjoy the show!

To find out more information about what chemicals and minerals make up your favorite fireworks, check out these websites where I got a lot of information:

University of Wisconsin-Madison (detailed and wonderful technical description of the chemistry that goes into fireworks)
American Pyrotechnics Association
About.com

*There were oh-so many song lyrics to choose from for the title of this post. For those of you who don’t feel that Katy Perry is your pyrotechnic cup of tea, I could have used ‘Firecracker’ by Josh Turner, ‘Fireworks’ by Drake, ‘Independence Day’ by Miranda Lambert, ‘Fireworks’ by the Plain White T’s…my, that list can get long, can’t it? Happy Fourth of July!