This was a crazy week here at Scienceline. We launched our first iPad App ever, something that’s been in the works for months and months. Those of you who know me at all know that I’ve spent the past two months on the phone with Apple at least once a week, sorting out logistic and technical snags and confusions. I was starting to lose hope.

So when I got the email from Apple, I actually almost passed out.  There it was!  In the iTunes store! I kind of freaked out a little. Okay maybe a lot. But we had no idea whether anyone else in the entire world would ever download the app we had worked so hard on.

Thankfully, some science writers and publications had our backs. Longtime SHERP champion Bora Zivkovic let us post a blog about the process on the SciAm Incubator Blog (written by the fabulous Mary Beth Griggs) and Wired featured a post on us as well (written by the also-fabulous Lena Groeger). Last I checked (a few minutes ago, for the first time actually) we had 396 downloads. In the grand scheme of things, that’s not a ton, but we weren’t even sure if we’d get 50 when we released it.

Some people on Twitter said some nice things about it too! 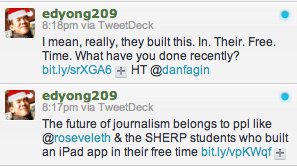 We’re still basking in the glow of this actually happening, but we’re also learning from it. There are a ton of things we wouldn’t do the same way if we did this again. The app is gigantic (700MB? Yes, really). It’s not updatable. It’s got some glitches. But such is the learning process, and we’re smarter now. We learned how to design, how to test interfaces, how to think about packaging content, come up with creative extras, figure out how people will navigate the space. We learned that even the iPad has limitations – our first version of the app was actually too big for the iPad to handle and we had to cut about half of the content.

The future of the app is in the hands of two very smart SHERP students: Benjamin Plackett and Virat Markandeya. They’ve got some great ideas for turning the Scienceline App into a lean, mean, news delivery machine. It will be lighter, faster, updatable, and a great way to get Scienceline content delivered to your Newsstand regularly.

So please, e-mail us at info@scienceline.org and tell us what you think. We want to know what you like, what you hate, what works well and what doesn’t. If you liked the app, or even just like the idea of a bunch of rookie journalism students slaving away over one, consider donating to the SHERP Scholarship fund. The NYU program is great, but it’s not cheap. Future students will really appreciate any help you can offer.