So should I eat chocolate or not?

A new drink of champions?

Lyndel Meinhardt waited as his guide chopped through the thick Peruvian underbrush, clearing a path through the jungle to something more desirable — and delicious — than any Indiana Jones artifact: a cacao tree naturally resistant to deadly fungal spores.

A research leader at Agricultural Research Service within the U.S. Department of Agriculture, Meinhardt knows that fungi-resistant cacao trees are a cacao farmer’s salvation. The top three fungal offenders — witches’ broom, frosty pod and black pod — typically do not kill the tree. But, they turn the cacao pods — the oblong red and yellow husks that hold cacao seeds — into a rotting brown mess.

A Missourian* who lived in Brazil for 10 years, Meinhardt often treks through the Amazon rainforest in search of fungi-resistant cacao trees. “It’s amazing that as many people love chocolate, almost nobody knows where it comes from or what it takes to get that chocolate bar into the store,” he says. “It’s a long, drawn-out process.”

Lately, Meinhardt’s search for resistant cacao has taken on a new urgency, as the three fungi spread throughout Latin America, many people fear it will infect trees in West Africa, the other center of worldwide chocolate production.  If the industry gets “any new major disease movements to new regions we could see a major drop there, which would elevate the prices and could be some impact in the market,” he says.

1999, about 40 percent of cacao crop was lost to diseases and pests, costing an estimated $2 billion per year, according to a report from World Cocoa Foundation. Since then, the challenges have only increased, says Ed Seguine, chocolate research fellow and flavor program manager with Mars Incorporated, the candy maker.

Researchers and growers are urgently searching for new ways to curb the fungi without altering chocolate’s irresistible flavors, recently sharing data at a genome conference in January. Scientists are scrutinizing the genomes of both cacao and fungi, looking for novel methods of attack.

“The cacao world is under threat,” Seguine says. Conditions are so bad, he says, that some frustrated farmers are urging their children not to follow them into an unprofitable business, one affected by unpredictable yields and fluctuating prices.

Searching for new approaches to protect cacao, researchers at Mars, the agriculture department and IBM collaborated in 2010 to sequence the genome of the cacao tree. The following year, a French-led international consortium published the genome of another cacao cultivar in Nature Genetics.

Having the decoded genome is a boon to researchers. If they can identify gene variants linked to desirable traits, they can pinpoint the genetic markers for tastier chocolate, resistance to pathogens and high crop yield in wild trees, and then cultivate or cross-breed them with crop trees.

But first, researchers must search the jungle for trees with favorable traits.

Scientists have been looking for the ideal cacao tree for a very long time. In 1938, Imperial College plant explorer F.J. Pound searched the upper Amazon for cacao trees resistant to witches’ broom, whose fungal spores cause green bursts of growth resembling a broom. Within three months, the green broom turns a dead brown, and in six to nine months, it produces a pink mushroom loaded with spores that spread quickly to nearby trees.

In Pound’s day, the disease had decimated cacao pods in Ecuador and Trinidad. It invaded Brazil in 1989 and halved its cacao crop, from 430,789 tons of beans in 1985 to 233,348 tons in 2010, according to the Food and Agriculture Organization of the United Nations.

Since then, other teams have recovered clippings from wild cacao trees and then grafted them — essentially cloning them — onto rootstock. During Meinhardt’s 2008 trip to the Peruvian jungle, his team returned with 128 live specimens from seven river systems.

“We are evaluating those right now” for taste, cacao quantity and resistance, he says, but the process takes time. It can take seven years before the trees produce cacao pods, and “you need a number of years before you can say this one is producing more or less.”

The long production cycle is part of the problem, says Seguine.

“Yields are no different than they were 75 years ago,” he says. “We have made little progress for the farmers.”

Again, technology can accelerate the process. Once the trees sprout leaves, farmers will eventually be able to hole-punch the leaves and test their DNA. Trees lacking the desired gene variants will be tossed while those expressing the right traits will be nurtured and their pods harvested.

“You’ve changed the breeding cycle from seven years to seven months,” Seguine says. “That is efficiency and that is the power of science.”

The USDA Trust and Mars have paid for laboratories in Ghana, Ivory Coast and Nigeria, allowing researchers to test trees for genetic markers. The Ghana group is preparing to publish three studies about the transfer of traits, Seguine says.

To ensure that chocolate doesn’t go the way of the large (but tasteless) strawberries and beautiful (but fragrance-less) roses found in supermarkets, Seguine tastes each new cacao sample, using 45 categories to rate them.

He and his French collaborator, CIRAD researcher Claire Lanaud, with several other authors, released a study at the Plant & Animal Genome XX conference in San Diego in January detailing 25 genetic markers correlated with sensory flavor from a population of Ecuadorian cacao cultivars. “It sure demonstrates that indeed flavor has a very strong genetic component to it,” Seguine says.

While genetic profiling should make cacao farming more sustainable and viable for farmers, “in the course of doing this, we want to make sure we do not accidently lose flavor,” Seguine says.

Even after trees with strong resistance to fungi become widely available, that won’t guarantee a perfect crop because not all traits will be expressed identically in every plant. Furthermore, fungi evolve, meaning initially resistant trees might later fall victim to a new breed of pathogens. While current cacao cultivars retain their resistance for about five years, researchers hope to increase it to 20 years, Meinhardt says.

Fungus-infected trees are not a new problem, but modernization and travel has made it widespread, especially in Brazil, the traditional heart of the cacao industry until the witches’ broom outbreak that began in 1987.

A big worry now is that witches’ broom and frosty pod will spread across the ocean to West Africa, where 70 percent of the world’s chocolate supply is grown, says Meinhardt. The frosty pod fungus, he says, is “another little demon” that turns cacao pods a frosty white and spreads spores that can live for six months. Witches’ broom’s spores are only viable for 48 hours.

The third of the three most important cacao killers, black pod rot, is already entrenched on both sides of the Atlantic. The rot is not a true fungus, but a harmful oomycete** related to the disease that caused the potato leaf blight in Ireland.

“When you have lots of rain, which is normal during the growing season, you will have cases of black pod,” Meinhardt says.

If farmers don’t notice the rot’s dark trademark spots on cacao pods, they’ll soon see black and rotten pods filled with up to 4 million sporangia inside. 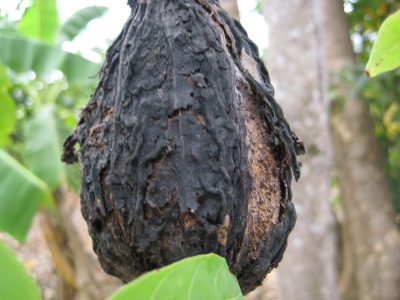 Many of the world’s six million cacao farmers are too poor to afford anti-fungal sprays, and have to monitor cacao pods for signs of pestilence. Organic chocolate companies, such as the Taza Chocolate factory near Boston and Theo Chocolate in Seattle, prefer this vigilance to pesticides.

“If you have a really well-manicured crop of cacao trees, then you’re much better off defending your plants against fungus,” says Nathan Palmer-Royston, product developer for Theo Chocolate.

If farmers catch a diseased pod early, they can cut it off and bury or burn it before it produces spores. Other tips include pruning trees so that every pod is visible, planting them in shady areas to reduce the amount of water needed (water helps fungi grow), and using compost instead of fertilizer — another fungi enabler.

Yet, too much shade also abets the spread of fungi. “You want to balance between sunlight and humidity and shade,” says Alex Whitmore, cofounder of Taza Chocolate. “Cacao needs some degree of shade and moisture to survive, that’s why there is a tight balance to strike.”

While this extreme caution reduces the need for sprays, it increases labor costs.

“If you’re doing it organically, it takes a lot of time being in the field pruning and being with your trees all of the time,” Palmer-Royston says.

No matter how vigilant farmers become, or how successful cacao geneticists are at identifying advantageous traits and promoting hardy cultivars, no one involved with cacao thinks that the Big Three diseases will ever be stamped out completely.

Fungi, Whitmore says, have to be “managed like a chronic illness.”

Despite the trials of battling fungi and reaching sustainability, many experts are optimistic about the dessert’s survival, at least for now. Seguine jokes that, “the thought of chocolate in peril is enough to cause apoplexy in the normal human being,” but he had reason for encouragement.

“While there are challenges, we have never been in as good a position as we are today to ensure that that challenges are met,” he says.

Laura Geggel has loved writing since her acrostic poetry days in elementary school. After working in two labs and studying English literature and psychology at Washington University in St. Louis, she combined her passion of writing with science. She interned at the Seattle Post-Intelligencer health desk and then at Harvard Medical School’s Focus. For the past three years, Laura has worked at two newspapers near Seattle, covering education, news, community and health stories.
Follow her on Twitter @LauraGeggel or check out her website.