A few facts about your favorite furry friends 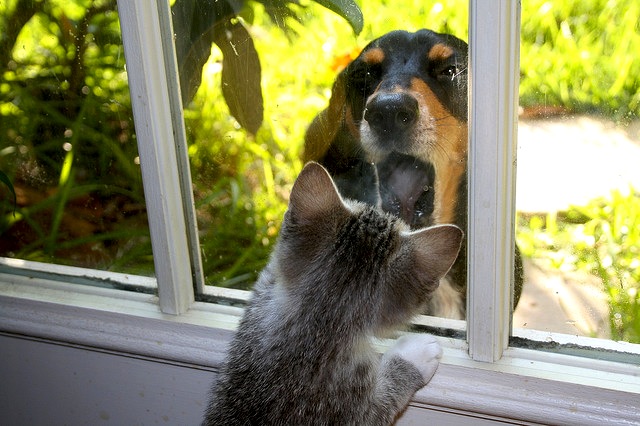 A Dog’s World, According to Science

It’s one of the eternal debates. We’ve made it such an important question — Are you a cat person or a dog person? — that it’s near the top of the list on member profiles for the hip online dating website OKCupid. Height? Religion? Cats or dogs?

I’m not sure what we think being a “cat person” or a “dog person” says about someone. Maybe cat people tend to act more like cats. Fastidious. Calm. Cool. Serious. And maybe dog people act more like dogs. Happy-go-lucky, goofy, messy and quick to forget.

Dogs and cats are certainly perceived very differently, as illustrated by this bit of humor that found its way into my inbox this week: 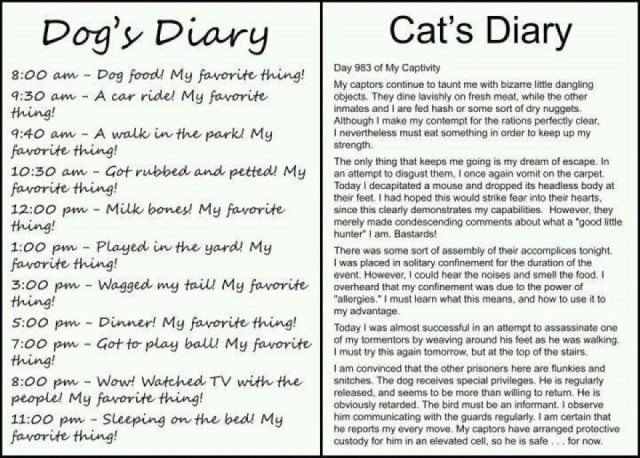 So what’s the science behind the cats versus dogs debate?

It’s likely that both cats and dogs initially associated with humans by scavenging around for scraps around human settlements. Dogs were domesticated first; the earliest evidence of domesticated dogs comes from Belgium over 30,000 years ago. Cats probably joined people as pets a mere 3,600 years ago in Egypt. So while cats might seem unruly and dogs trainable, perhaps in 25,000 years cats will be rolling over for treats and running out to get the paper — they’ll have had more time to adapt to humans by then.

Yet, it’s possible cats won’t ever be as good at responding to their owners as dogs. Dogs’ brains are larger. They’re thought to be smarter. Researchers have shown that cats are unable to understand cause and effect, which is why they can be slow to piece together how you’re making the mouse at the end of a string jump along by jerking your hand. A dog has the relatively complex intelligence of a two-year-old person, however. So this video exaggerating stereotypical cat chicanery might be slightly more accurate if the culprit was a dog, not a cat.

If you’re a cat person, you may have sworn allegiance to the dumber pet. But the good news is that you yourself might be smarter. Pet owners surveyed in Great Britain were more likely to have a university degree if they own a cat rather than a dog. Which makes a lot of sense, really. Go to school, get in debt, and buy the only pet you can afford. (I’m an embittered graduate student with loans. Can you tell?)