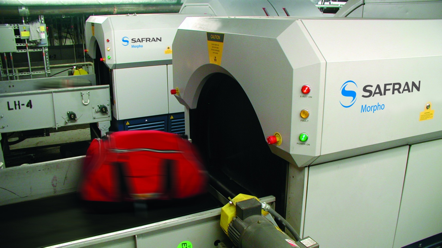 With coherent scatter imaging under development, X-ray machines are about to get a lot more sophisticated [Image credit: Morpho]

The science behind the sanctions

The undercover security officer, dressed in “civvies” – civilian clothing – dropped his bag onto the conveyor belt. The woman operating the X-ray machine, his colleague, paid him no attention. She was busy riffling through the work schedule ledger, figuring out how many hours she would work the following week. So the dummy bomb the officer had placed in the bag sailed through the scanner, unnoticed and unchecked.

Gaffes like the one that occurred on Oct. 4, 2012, at Manchester Airport in the U.K., don’t occur regularly. If they did, we would all be a lot more reluctant to hop on a plane. Maybe the woman operating the X-ray machine was having an off day. If she wasn’t then, she certainly did from that moment on – her superiors suspended her for six months for failing the drill. But the Manchester incident highlights the deficiencies of our current airport security systems, where machines that rely on the same technology “that has been used for 100 years,” says David Brady, head of the Duke Imaging and Spectroscopy Program at Duke University, continue to be used to protect us from crazed bombers and terrorist plots.

But Brady thinks we have reached a turning point in X-ray technology. New detection systems will soon go far beyond displaying simple outlines of the objects in a suitcase; they will detect the exact molecular structure of a bag’s contents.  More precise than bomb-sniffing dogs and a lot more reliable (dogs are notorious for only being able to work for four hours at a time – and that’s on a good day), this revolutionary technology, called X-ray scatter, will override the risk posed by absent-minded X-ray machine operators. And the U.S. Department of Homeland Security is doing everything it can to speed this process along, including bringing together some of the world’s most secretive scientists – bomb-detection experts.

“The DHS is seeing this explosion – that’s a terrible word to use – but this explosion of new explosive materials that are starting to show up,” says Cameron Ritchie, chief technology officer at Morpho Detection Inc, a company whose explosives detection research center is located in Santa Ana, Calif. Indeed, new explosive-making techniques like co-crystallization — which allows chemists to combine two explosive compounds into a single powerful and much more stable explosive — are making more than a few people in the security industry nervous. The explosives detection industry needs to adapt, says Ritchie, because “the bad guys continue to innovate.”

With that in mind, the DHS held a meeting on Jan. 10, 2013 with the explosives detection elite to discuss the future of the field – a future, they hope, that will drastically change the way travelers go through security checkpoints. “We don’t think simple tweaking of the existing technologies will suffice,” says David Castanon, a computer and electrical engineer at Boston University who attended the meeting.

The DHS invited representatives from private companies like Morpho and their competitor, Smiths Detection, as well as academic researchers from universities like Duke University, Boston University and the University of Arizona. At the meeting, the government agency invited these organizations to submit research proposals to help improve America’s bomb detection methods. At stake is $25 million in funding grants, which the DHS will award to the teams that propose viable new forms of explosives detection technologies.

And all the experts have one thing on their minds: X-rays  – just not the kind your dentist uses.

Current X-ray machines only allow security officers to identify broad classes of materials, like metals and plastics. Anything suspicious has to be searched, which is far from ideal. “We want to find the actual material and identify it,” says Ritchie. “We want to know that in your luggage there is a block of cheese or that in your carry-on item there is a jar of peanut butter – those are the kinds of things you need to know to prevent false alarms.”

X-rays interact with materials in four primary ways: fluorescence (the emission of secondary X-rays from a material, usually at a lower energy level), photoelectric effects (where an X-ray dislodges an electron from an atom), Compton effects (where a material’s electrons scatter positive X-ray particles, also called photons) and coherent scatter.  In medicine, doctors use technology that combines all those effects. X-ray machines measure the “attenuation,” or the gradual loss of X-ray intensity that occurs when the rays interact with a material. Fat tissue, for example, doesn’t cause much attenuation – the rays go right through – but bones are harder to penetrate. That’s why they show up so clearly on an X-ray slide. But the researchers summoned at the DHS meeting aren’t sticking to your grandpa’s X-ray technologies. For them, the future of X-rays lies in coherent scatter.

In coherent scatter, X-ray photons diffract – this is the “scatter” part – after colliding with the crystalline structures and molecules in the scanned material. Individual materials cause X-rays to scatter in specific patterns that are dependent on a material’s unique chemical structure. So if you can find a way to visualize these patterns, then you also unlock the secret to revealing any material’s identity. Armed with this technology, security officers will be able to identify both the solids and the liquids contained in your suitcase, without ever having to undo a single clasp or unzip a single zipper.

Scientists have known about coherent scatter for almost as long as we have known about X-rays, but building detectors that use this effect is a whole other matter. Many detection imaging methods have been tried with varying degrees of success, says Brady. Researchers have yet to find a method that is both sensitive enough and cost-effective enough to suit an airport’s needs. According to Brady, the kind of imaging that researchers are currently working on – tomographic imaging of coherent scatter, which gives scientists information on an object’s molecular composition by cross-sections – is not only the most effective mechanism for analyzing materials using X-rays, it’s also “the Holy Grail of X-ray materials analysis.”

The experts are now racing to build the Holy Grail: the ideal sensor. But the DHS doesn’t just want a competition – it wants a friendly one to boot. “What is unique about this situation is that the DHS is laying out a road map for industry professionals and academics to interact,” says Brady.

According to Morpho’s Ritchie, one of the ways the governmental body is promoting collaboration is by favoring projects that include academic partnerships. And despite the culture of secrecy in this field, no one seems to be complaining.

“It’s an equitable deal for everybody. [Academics] get some research done – they can publish some papers and students get their PhDs – we get some very interesting technology, and the nation gets better security,” says Ritchie. “It’s sort of a win-win-win.” But for academics, it’s about more than just getting some papers published. It’s about being able to compete in the first place.

Because of funding restrictions, universities have a hard time competing with detection companies and national laboratories. “At the Pacific Northwest National Laboratory, they have four-foot concrete walls to protect them from X-rays – we have plywood,” says Boston University’s Castanon. So traditionally, academics developed the theories while industry works on making these technologies a reality.

But in this particular field of research, collaboration can also be a hindrance for university researchers.  The need for secrecy makes it very hard for institutions to do their most important job – teach.

“You have to be careful as to who has the data,” says Castanon. And it’s the same in every university, “when you get into the classified stuff, each individual needs clearance,” says Ehsan Samei, radiology professor at Duke University. In order to participate, some students have to jump through a ton of bureaucratic hoops – of course, that’s if they get to jump at all.

International students, for instance, aren’t allowed anywhere near this field of research, says Samei. The government provides most of the money that allows these programs to run, so universities have to conform to certain government expectations. And one of those expectations is to prevent foreign student involvement.

“We know that some of the smartest students aren’t U.S. citizens, but the DHS has specific rules by which we have to abide,” says Morpho’s Ritchie. “You have to be careful about who you work with.”

Despite these obstacles, researchers are praising the Department of Homeland Security’s efforts. They know that once the prototype testing gets going, a process that should start within the next three years, the DHS will have an enormously difficult job to do – certifying the machines. “To certify them, you have to create the materials you want to find,” says Ritchie. “So here are these DHS government guys who have the environment health and safety people all over them, and they have to build incredibly dangerous explosives to test them.”

The whole process, from early research to the final stages of prototype testing will take an estimated five to six years. And despite the enormous amount of work that goes into developing these technologies, Ritchie still thinks he has it easy. “It’s having to figure out what the lunatics are trying to build and then recreate it,” he says, “that’s the hard part.”