What evolution can tell us about why we laugh 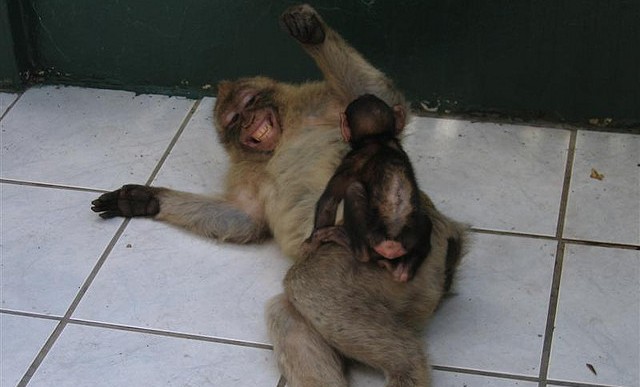 Are humans the only animal that laughs? [Image Credit: Peter’s Pics via Wikimedia Commons]

Night falls and I’m still in bed. The sheets are hot and damp from two days of fever, and if I’m getting any better, I can’t feel it. When a good friend of mine calls and asks how I’m doing, I admit I am miserable. “Well, worst case scenario,” he jokes, “you’ll be dead in a few hours.” He laughs a deep and sadistic laugh, and I can’t help it, I laugh too. We talk for a bit longer, he wishes me well, and hangs up the phone. Still ill and not too happy about it, I am left alone in my room with the echo of my laugh and a question. Why do we laugh when we’re feeling awful?

Laughter, like smiling and sex, is an activity we commonly associate with pleasure and happiness. But humans laugh for many different reasons, and not always as a simple expression of mirth. Though we laugh at jokes — from crude slapstick to complex wordplay and the absurd — we also laugh when we are nervous. We laugh to mock. And indeed, laughter, an action that seems innately human, has been documented alongside the most inhumane of acts — public executions, rape and genocide. With such a variety of reasons, what’s the evolutionary purpose of laughter in the first place?

Our laughter, the Tommy gun staccato sound of “ha-ha-ha,” is unique in the animal kingdom. Beyond scientific anomalies like Mister Ed or Babe the pig, if you visit your local zoo you’ll be hard-pressed to find any animals making a sound you’d confuse with human laughter. But do humans, in the vast gallery of life, laugh alone? Ask Jaak Panksepp, a neuroscientist and veterinarian at the University of Washington, and he’ll tell you no. Panksepp studies laughter where you might least expect it, in lab rats.

“In the mid 1990’s we found [rats] have a sound — a high-pitched chirp — that they made most often during play,” says Panksepp. “It crossed my mind it might be an ancestral form of laughter.” And Panksepp, eager to investigate, dove hands-first into his theory. He tickled his rats.

What he found lead to two decades of research. “They’re just like little children when you tickle them,” says Panksepp. “They ‘love’ it.” Moreover, rats produce plenty of this curious chirping. Today, Panksepp and other researchers have fully mapped the neural basis of this “rat-laughter” with fMRI and electrical stimulation. “We probably understand more about the neurology of laughter in rats than in humans,” says Panksepp, as much of the research requires surgical operations that would be unethical to perform on human subjects.

Rat laughter is a primitive social signal. When rats play with one another, they laugh, and when they are tickled, they laugh even harder. This signal communicates enthusiasm and social joy. Scientists like Panksepp avoid anthropomorphizing the animals they study, but rat laughter is essentially one tiny thumbs-up. “I like this!” the laughing rat might as well be saying.

This is also true for the other two animal groups known to have neurologically similar laugh responses: canines and primates.

Both primates, such as chimpanzees, and dogs produce a type of panting — not associated with fatigue — when amused or in the midst of play. Though this panting “laughter” sounds nothing like the rapid-fire cackle humans make, researchers like Panksepp believe it is seed of modern laughter.

So could this have been the reason I laughed at a joke about my own death? Was I just responding to a playful, albeit dark, social cue? Or did the humor in my friend’s joke elicit a more complicated psychological response?

Vilayanur Ramachandran, a neuroscientist at the University of California, San Diego, believes the “panting laughter” found in other apes slowly evolved into a more complex social signal in humans. In a 1998 scientific paper, Ramachandran outlined a theory — still regarded in neuroscience as our “best guess” at the evolutionary origins of human laughter — that human laughter might have evolved to alert others of “false alarms.” If you’re an ancestral human, says Ramachandran, and you come across what you think is a dangerous snake but actually turns out to be a stick, you’re relieved and you laugh. “By laughing, you’re communicating: ‘All is OK,’” says Ramachandran.

Ramachandran believes the “false alarm” signaling purpose of laugher explains its loud sound and explosive quality. If you want to signal something to a larger social group, they better hear it. His theory also helps explain the contagiousness of laughter — a curious quality exploited by the laugh tracks of TV sitcoms. Strangely enough, hearing the sound of laughter, on its own, is enough to elicit more laughter in others. “A signal is much more valuable if it amplifies and spreads like wildfire in the group,” says Ramachandran.

But if laughter is for signaling “false alarms,” what role do jokes and humor play — like the one my friend told me over the phone? “A good example is slapstick,” says Ramachandran. “If a man slips on a banana peel and hits his head and starts bleeding to death, you’re not going to laugh. But if he [only] falls down and wipes it off his face, you start laughing,” he says, “The first case is a genuine harm. The second case is a false alarm.” Ramachandran says that by laughing you’re signaling to others, “don’t bother wasting resources attending to this guy.”

But Ramachandran’s theory doesn’t explain why things like complex wordplay — puns and limericks — can provoke laughter. And unless I was relieved that I wasn’t really dying, or was humorlessly echoing my friend, it certainly doesn’t explain why I’d laugh at a joke about my own death.

Maybe the answer lies in the role that laughter plays in everyday — even mundane —conversations. Robert Provine, a professor of psychology at the University of Maryland, studies just this. He considers laughter a relatively primitive social cue that has been co-opted by our neo-cortex, the part of the brain in command of reason and complex thought.

“Contrary to [our] expectation, most conversational laughter was not in response to jokes or humorous stories,” Provine wrote in his 2012 book, “Curious Behavior.” Provine found that in conversation, everyday comments like “Hey, there’s Steve!” caused over 80 percent of all instances of laughter. He explains that this might be due to the social benefit of laughter. In short, people instinctually relate laughter to good feelings and social bonding, and so, unconsciously, we laugh to promote these qualities in conversation. But this conversational laughter is still a genuine response. Try to laugh out loud right now (go ahead, I’ll wait)… it likely sounded fake and hollow. “The role of conscious control [in laughter] is vastly overrated,” wrote Provine in an email.

So was my laughter just a response to a conversational cue? Alex Lickerman, self-help book author and general internist at the University of Chicago, thinks otherwise. He believes that our neo-cortex has adapted laughter for more than just social means. “If you are laughing at something, it makes that something easier to endure,” he says. “If you’re going through adversity or tragedy and you’re able to laugh at it, it gives you a shift in perspective.” Laugh at something, says Lickerman, and you exert some level of control, however minute, over it. “Humor is pleasurable, and pleasure is distracting,” he says. “One of the strategies people will use to deal with anxiety is to distract themselves.”

So maybe I laughed for self-support during a time that I wasn’t feeling well. But just as likely, I might have laughed for some combination of other reasons: It was part of the conversation, I was relieved at the deadpan joke, or I was happy with the social communication. Laughter is an amalgam of several different social and evolutionary purposes and even now, neuroscientists have no definitive answer for what causes the diversity of laughter. Though I could say that I may have laughed simply because my friend’s joke was “humorous,” that might not offer much by way of an explanation. As Lickerman explains, “Humor itself may be irreducible. I’m not so sure that ‘funny’ can be reduced into anything more than, well, ‘funny.’”

So why do we laugh when we’re feeling awful? We might not know yet, but it’s fair to say that even though laughter has its evolutionary roots in pleasure and happiness, you don’t need to be happy to laugh. To quote one of the greatest scientific minds of our time, Smokey Robinson: “Don’t let my glad expression / give you the wrong impression.”

William Herkewitz is a graduate of the University of California, Santa Cruz, where he earned his B.A. in English literature. A lifelong lover of science, he is coming to NYU after a year of writing and working for two Philadelphia-based science museums, The Academy of Natural Sciences and the Chemical Heritage Foundation. At SHERP, William hopes to somehow combine his compulsive need to write with his interests in science, humor, history, and international affairs.