Scientists find that tree frogs do more walking than hopping 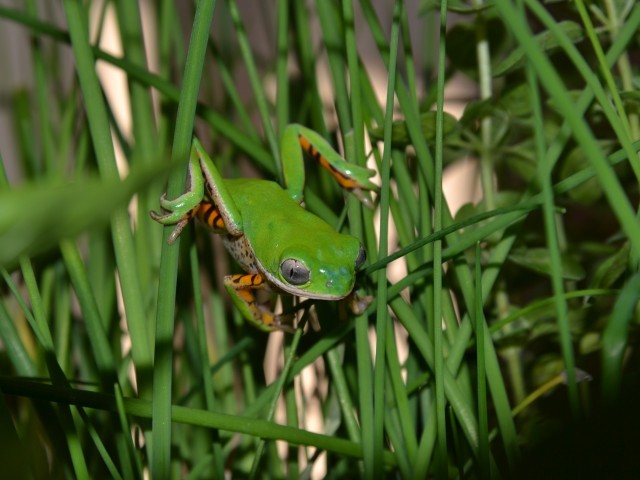 Football, frogs, and far far away

Tree frogs know how to walk the line. By extending their limbs one step at a time and wrapping their fingers around narrow twigs, some tree frogs move from place to place without making a single hop. Now, a new study shows that this “walk-don’t-hop” behavior is more than just an adaptation to life among leaves.

It’s a clue to how different tree-dwelling animals, perhaps including primates, have evolved to move in similar ways.

“I think this is really neat and exciting research,” says Duncan Irschick, a morphologist at the University of Massachusetts-Amherst who was not a part of the study. “I was surprised to see how many tools these frogs had in their toolbox.”

Frogs are natural jumpers, but life in a tree doesn’t always lend itself to leaping about. To face the challenge of getting across narrow, inclined and textured branches, tree frogs evolved fine motor control of their fingers. “No matter whether you’re a monkey, a frog or a lizard, if you have to walk on a branch you will do it the same way because that’s simply the best way to do it,” says Anthony Herrel, lead author of the study and evolutionary biologist at the French National Center for Scientific Research (CNRS) in Paris. He and his colleagues studied the tiger leg monkey tree frog (Phyllomedusa azurea), a species the size of a human thumb that is known for its ability to scale very fine branches.  “We chose this species to clearly demonstrate that primates are not the only group needing to adapt their locomotion to the arboreal environment,” says CNRS evolutionary biologist Emmanuelle Pouydebat, a co-author of the study.

To study how these frogs move around, the researchers covered thin metal wires with an anti-slip surface and twisted them together so that they could make “branches” with different diameters. Then, they recorded the frogs as they walked along the branches, which was not always as easy as it sounds. “It’s only when we put some fake plants at the end of the track,” says Herrel, “that they decided to really go for it and walk nicely in front of the camera.”

The experiment demonstrated that the frogs preferred to hold wider, tilted “branches” between fingers two and four, placing their third finger along it. When the branch was smaller they chose to only hold it between fingers two and three. Thus, the diameter and incline of branches affect the type of grip that the trees frogs use to hang on while walking, the scientists reported in The Journal of Experimental Biology. “I was amazed to see all the different gripping forms,” says Kathleen Foster, a biomechanist unaffiliated with the study, who studies lizard locomotion at the University of California, Riverside. “It’s very promising. Frog biomechanics  focuses on jumping and landing but these guys aren’t doing that. The more we do studies like this, the more we realize how much we don’t know about the challenges animals face and how they overcome these challenges.”