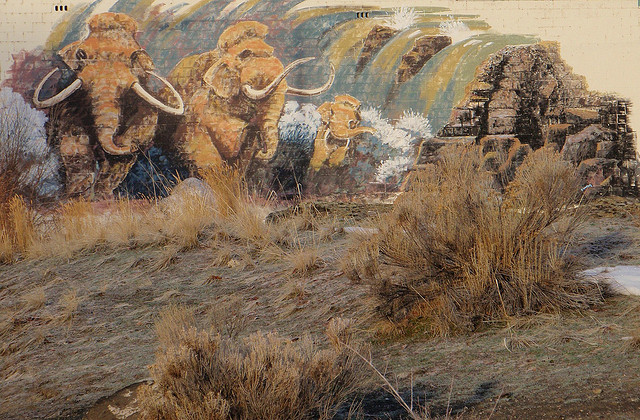 Since National Geographic’s “De-extinction Issue” was published this past April, scientists have started to seriously consider the potential of selective breeding, cloning or other kinds of genetic manipulation to revive extinct species. Though there is no agreement among experts about whether de-extinction is advisable or even possible, Ross D. E. MacPhee, curator at the American Museum of Natural History demystified some of the issues on a warm night in early October.

The evening began in a dimly lit section of the museum up on the fourth floor. The room, so crowded with eager listeners that every chair was filled, was surrounded on all sides by relics of by-gone species, including a wooly mammoth skeleton, a large bony fish, and a large long-necked dinosaur, to name just a few.

MacPhee opened his talk with a definition. “De-extinction is the effort to bring back species that are no longer with us.” He discussed various methods that make de-extinction a real possibility, but he said the best hopes for success lie with synthetic biology, which involves the creation and manipulation of genes in the genome. MacPhee used the popular example of growing meat as an example of the convention-defying results that synthetic biology can produce.

Researchers have also begun to experiment with synthetic biology to determine if it is a feasible method of de-extinction. In fact, MacPhee mentioned a project, led by scientist Ben Novak, underway using these techniques to attempt to bring back the passenger pigeon, extinct since 1914. Harvard’s George Church is in charge of data analysis for this project. Using synthetic biology, Church will use the DNA of a close living relative of the extinct species, in this case the band-tailed pigeon, as a guide so that the DNA of the passenger pigeon can be repaired, since time has left the DNA damaged. Once that is done, Church can produce viable DNA that will be sent off to the Roslin Institute in Scotland, where they are working on another process that will turn the DNA into a living passenger pigeon. MacPhee explained that this had a higher probability of success since the passenger pigeon has been extinct for a relatively short amount of time and it still has relatives, like the band-tailed pigeon, that are genetically and physically similar. This is crucial when thinking about the feasibility of these sorts of projects, he said.

This means, unfortunately, that not all extinct species hold the same potential for de-extinction. MacPhee mentioned the giant ground sloth as one of those animals that would probably never be brought back. “Ground sloths were 4-5 tons, hundreds of times bigger than any living sloths,” explained MacPhee. This enormous size difference between the giant ground sloth and living sloths makes it highly unlikely that it would be revived.

The wooly mammoth, on the other hand, could potentially to be brought back using this method. Asian elephants are known to be the closest living relative genetically; they also closely resemble mammoths in size and weight. However, the real question that MacPhee wanted to drive home is not whether we can revive a species from extinction, but whether we should do it.

“The real issue is considering animal welfare. Who will take care of them? Where will they go?” he asked. Animals like the wooly mammoth don’t have a place they can live anymore; the world has changed too drastically since they were around. “Implications are never straight forward,” MacPhee said. “We are able to play God, but we don’t have omniscience”.