A marine conservationist joins forces with fishermen to save fish habitats 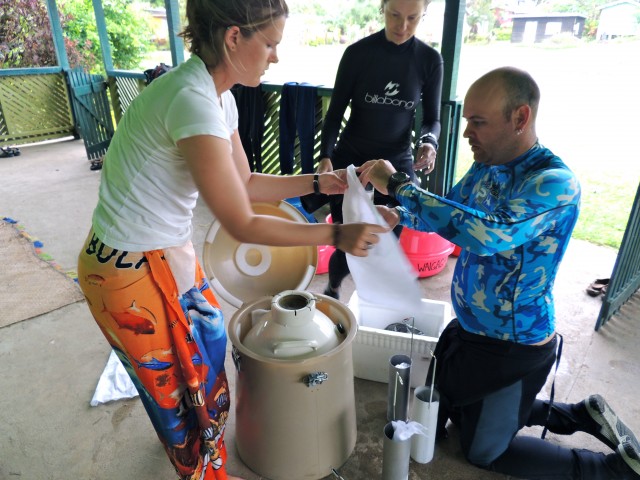 Joshua Drew (R) gets ready to collect samples before a dive in the Fijian islands. [Image credit: Erin Eastwood]

“I love seeing her in varying moods. I love seeing her when she is calm, and even when there’s rough weather.” Joshua Drew’s reverence for the ocean is obvious to anyone who meets him. Drew, a conservation biologist at Columbia University in New York City, uses genetics to understand ecological habitats and help preserve them.  But in the world of marine conservation, what makes him special is his passion for conserving not just the sea and its abundant creatures, but also the culture of the people who depend on it.

Every year for the past nine years, Drew has packed his bags and spent about a month in Fiji to collect fish samples and build ties with the local communities. “He studies the sociology of people, not just fish,” says Les Kaufman, an ecology professor at Boston University who oversaw part of Drew’s doctorate research. “You don’t see too many conservation geneticists do that. Very few get the human dimension and Josh is one of them.”

Drew’s affair with Fijian fish began during his doctoral days at Boston University, where he studied the population genetics of a few small fish. While his students look at different aspects of fish ecology in Fijian reefs, Drew is particularly interested in studying how reef fish are endemic to specific areas and harnessing this information to set up protected areas. Drew sees conservation as a partnership between scientists and local people. “I’m not going to tell you how to run your reef,” he says. “There is no reason why they should listen to me. But if we work together and if there are open lines of communication, they understand why we are doing this research, what the potential benefits of conservation are, and then we can come up with a shared research goal and conservation strategy.”

Drew runs the masters program in conservation biology at Columbia University, of which he was a graduate student himself almost a decade ago. He and his students study the biological diversity and ecology of fish that live in reefs in Fiji.

“The Fijians don’t just let anyone in,” says Kauffman. “But, Josh is just a whiz at that. After his Ph.D., he actually went back and helped them understand that if they overfish, they would not get back those fish.” Drew’s research had shown that those species were endemic to that area. “It was just amazing how excited the local chiefs were to know and understand this.”

Drew’s interest in conservation wasn’t by accident. As a kid growing up in upstate New York, his father often took him hiking and to places like the Five Rivers Environmental Education Center in New York state, which made him love being out in the open. He distinctly recalls seeing the PBS documentary series “Nature” during his childhood. “It became a running gag because I used to get really upset,” recalls Drew. “During the first 50 minutes of that hour they told you how awesome something was, like some place in Africa or reefs in the Indian Ocean, and the last 10 minutes were like, too bad, it’s all dying. It would take me on an emotional roller-coaster.”

His foray into marine conservation, however, began with his first scuba diving expedition, off the Mexican coast, which he says was one of the key moments of his life. “It was a total South Florida-mosaic type of moment,” he says. “That’s what got me interested in this stuff.”

After studying ecology during his undergrad days at Boston University, where he hiked and kayaked for credits, Drew joined the Wildlife Conservation Society in the Bronx. There he worked on shark tagging projects and saw the business side of conservation as well. But he didn’t feel like he could control the projects he got to work on, so he decided to pursue his master’s at Columbia University after which he went back to his alma mater Boston University to do his doctorate.

A tattoo on his arm tells the story of his doctoral thesis . A pair of wrasse with the double helix emerging out of it, it memorializes his work on genetic connectivity in Fiji. During his post doctoral fellowship at the Field Museum in Chicago, Drew spent time analyzing the DNA from shark tooth specimens from the museum’s collection. From this project, he made a surprising discovery: that two particular species of sharks that don’t exist near the Gilbert Islands today were present in the same areas nearly 200 years ago, which was previously unknown.

His lab has described six new species of fish so far. When Drew got to name one himself, he decided to choose that of an old Fijian prince called Mafu. “He is the only person I know who does both, anthropological studies of communities and genetics,” says Paul Barber, an ecology and evolutionary biology professor at UCLA, who oversaw part of Drew’s doctoral thesis. “His work with traditional ecological knowledge and genetics has been very interesting and very useful for local conservation. The range of work that he has done is more diverse than most others.”

But research isn’t Drew’s only passion. He values teaching and helping his students find their own voice. He has organized outreach programs in the past with high school students about reef biology and continues to push for science communication through educational videos and blogs.

This coming summer, using DNA collected from fish samples, he will try to prepare lists of fish for all the islands of Melanesia and plot their location patterns. This information can help governments of the islands to allocate resources for the conservation of endemic species. Drew also plans to start a project of collecting data over a five year period from protected and unprotected reserves and carry out a controlled experiment to make the data more comparable.

Originally, this article read that Drew had a tattoo “A shark with the double helix emerging out of it”. It is instead a pair of wrasse, and a change has been made to reflect the same.