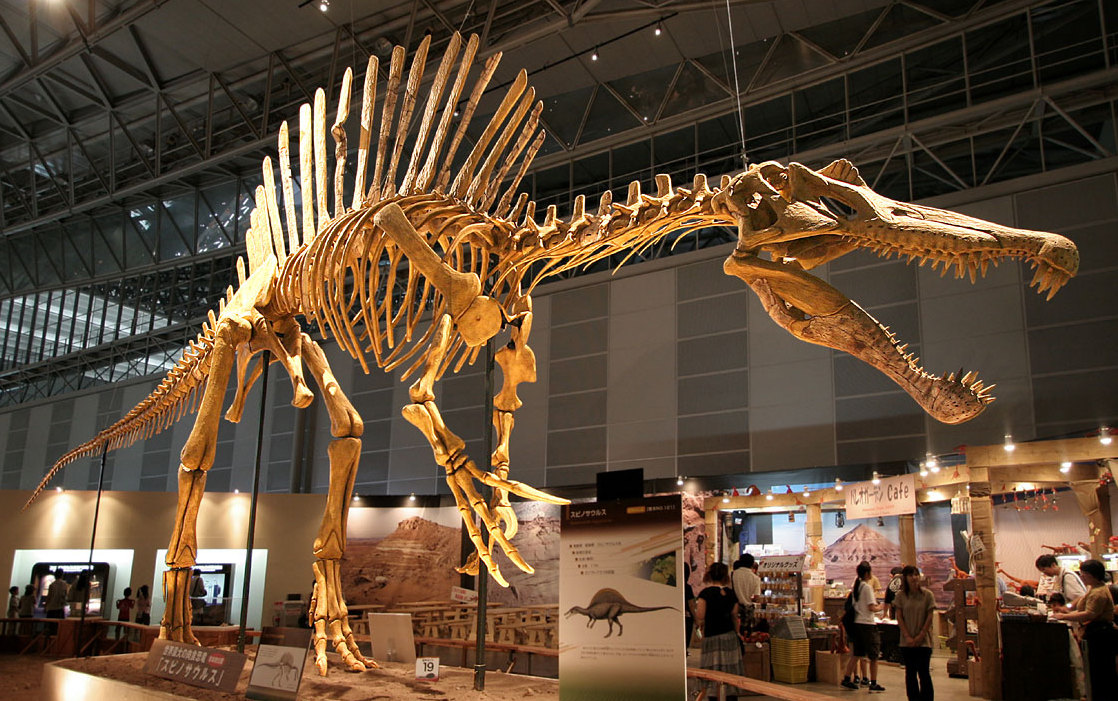 The newly uncovered Spinosaurus specimen is just the tip of the iceberg. Image courtesy of Kabacchi via Wikimedia Commons

Curse of the Dino Mummy!

Earlier this month, scientists announced the discovery of Spinosaurus aegyptiacus, a massive semi-aquatic dinosaur that lived about 95 million years ago, laboriously unearthed over several years in Morocco.

Sure, dino-nerds worldwide were fascinated by Spinosaurus’s unique combination of features that made it well-suited to life in the water: interlocking teeth perfect for catching fish, the “sail” sticking up from its back like a shark’s fin, the loosely connected bones in its tail that suggest it would have slithered in a wavelike motion. But it’s even more captivating because Spinosaurus is the largest predatory dinosaur to have ever roamed the earth, measuring nine feet longer than the Tyrannosaurus rex.

Dinosaurs were creatures of extremes, which is part of the reason we’re so fascinated by them. They grew to incomprehensible sizes, yet many of them were able to fly. They lived in trees and on land, locked in an evolutionary arms race for hundreds of millions of years until a meteorite changed the stakes. But while they were around, they developed some truly amazing—and bizarre—adaptations. Below is a list of the species that set the known limits for dinosaur kind.

Measuring about 70 feet tall and 115 feet long, this dinosaur holds the record for the largest land animal to have ever existed. It lived during the Cretaceous period (145 to 66 million years ago), when most of the other large sauropods (long necks, short legs) had already gone extinct. Argentinosaurus mostly ate leaves and other vegetation in packs, trying to stave off attack from the predatory Giganotosaurus, which had to hunt the massive Argentinosaurus in groups.

The name “microraptor” may make you want to coo over your hypothetical Cretaceous pet. But the Microraptor was not to be toyed with. This tree-dwelling, carnivorous, four-winged dinosaur was about the size of a crow and would glide from branch to branch in search of its favorite prey, small mammals and birds (and sometimes fish). Microraptor’s black iridescent plumage points to another connection between dinosaurs and birds.

With long, thin beaks, stiff necks and six little fingers, pterosaurs were the first vertebrates to evolve active flight. They were mostly gliders, with wingspans ranging from 18 inches to almost 40 feet. Quetzalcoatlus northropi, the species with the largest wingspan, lived at the end of the Cretaceous. Its feeding habits are still hotly contested among paleontologists, who think it may have fed on fish like other pterosaurs, or on carrion when it lived far from a water source. Either way, feeling the shadow of a 40-foot wingspan surely inspired terror in the individuals on the ground.

These theropods (bipedal dinosaurs) appeared in the Lower Cretaceous (about 125 million years ago) and strongly resembled modern-day ostriches. They had long, slender legs and were fairly large in size, some measuring 20 feet long with an eight-foot “arm span.” Based on their dimensions and modeled locomotion, some researchers predict that they could have run up to 60 miles per hour, a speed that might have been necessary for them to catch their prey. Individuals from the Ornithomimid species Gallimimus were featured in “Jurassic Park” when the protagonists were caught in a stampede.

There’s a reason this dinosaur is usually called “the prehistoric tank”—its body is covered in bony armor, its back is bristled with spikes, and its tail ends in a club. Sure, it moved pretty slowly and only fed on plants, but the only way to prey on this beast was to flip it over to expose its weaker belly. That wouldn’t have been so easy for most predators because adults weighed five or six tons, the equivalent of about 3 minivans. All its armor couldn’t save the Ankylosaurus from extinction; it came and went in the Late Cretaceous, about 66 million years ago.

Stegosaurus lived earlier than the other dinosaurs on this list, first appearing during the Jurassic (156-140 million years ago). It’s best known for its two distinguishing qualities: dual rows of spikes down its back and tail, and shockingly miniscule brain. Even though Stegosaurus measured up to 30 feet long and could weigh over three tons, its brain was about the size of a walnut, weighing less than three ounces. Luckily, they didn’t need to be too smart; Stegosaurus’ spikes did most of the work defending them from predators, so they could focus on eating.

Because of its size, speed and well-known ferocity, T. rex is also arguably the most famous dinosaur. You may find T. rex hard to forget, but if one actually bit you, it would be hard to survive; the jaws, measuring four feet long, would have been able to apply 12,800 pounds of pressure on its 60 fearsome teeth to crush the bones and flesh of its prey. That’s like being able to chew something with the force of your own body weight.

Lambeosaurus, which lived in the Late Cretaceous, was one of the duck-billed dinosaurs, which had hollow, bony crests on top of their skulls. Although paleontologists still debate the primary use for these crests, the prevailing theory states that Lambeosaurus may have used it to make sounds. Other theories propose that Lambeosaurus could have used it to smell or just to distinguish between species.