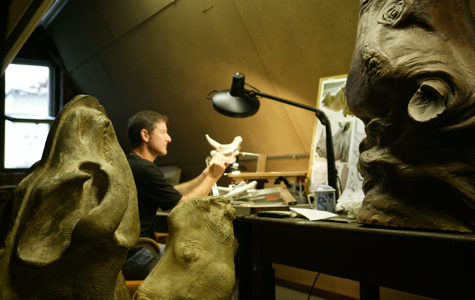 Mick Ellison held a small dinosaur skull under gently dripping water, dabbing at the fossil with a fine brush. Bit by bit, layers of dust and grit fell away, leaving a cleaner, more vibrant specimen ready to be photographed or sketched. Then, without warning, the ancient skull fell apart.

“It collapsed in my hand into a million tiny pieces, and chunks of it went right down the drain,” says Ellison, a scientific illustrator and photographer then in his first weeks at the American Museum of Natural History in New York City. “I thought, ‘Well, that’s it. Grab the coat, I’m going home.’”

These are the horror stories that scientific illustrators bring home from work: while the rest of us jam a fax machine, they break 100-million-year-old fossils. Ellison, who avoided the firing squad that day and still works at the museum more than 18 years later as a senior principal artist, says the process of working with such ancient specimens can be unnerving. “That can still be kind of trippy, but it doesn’t happen as much after getting used to working with this stuff.”

Once the artists can shoulder the weight of the millennia, the branch of scientific illustration known as paleo art is responsible for universal cultural knowledge. Every child grows up with a mind’s-eye picture of a Tyrannosaurus, and yet, no human has ever laid eyes on one.

“It is a pretty wild thing to try and envision an animal that nobody has ever seen before,” Ellison says. “It’s a cool feeling.”

Getting to Ellison’s office at the museum is nothing short of a journey. Walking through a ground-floor exhibit hall, he stops abruptly and literally pulls a wall to the side, revealing a freight elevator behind it. Several floors up and a few twisting hallways later, he opens the door to what could easily be a movie set. A lion skull rests on a stand near the door, and giant butterfly models sway languidly from the ceiling. A drawing desk sits in the corner, isolated but illuminated by industrial-looking lighting.

Mounted on the wall over the computer desk is a drawing of a titanothere, an ancient ancestor of the rhinoceros. Ellison is in the midst of a project to recreate the beasts, an exhausting process that will, he hopes, end with reasonably accurate drawings of the long-extinct animal. He stops in the middle of a sentence to drag over an aid he has been using: a life-size plaster death mask of a modern rhinoceros. He hefts it across the office and deposits it next to the desk, leaving the rhino in a post-mortem pondering of the drawing of its titanic ancestor.

Such death masks and other artifacts are crucial when struggling to achieve scientific accuracy despite a limited fossil record. As he moves through a project, Ellison often asks a series of questions about his subject: “Was it living in the woods? Was it living in the desert? Animals that live in woods or deserts today—how are they marked? What is the coloration? Was it a predator? Was it an herbivore? Was it traveling in a herd?” Bit by bit, he closes in on the way an animal might really have appeared.

Ellison’s diligence has paid off, with his work appearing on the covers of Nature, Science and The New York Times, as well as in National Geographic, Newsweek and Discover. He has also illustrated several books about dinosaurs and evolution.

Carl Mehling, the museum’s collections manager for fossil amphibians, reptiles and birds, says because the public tends to think of drawings of ancient creatures as if they were photographs, achieving maximum accuracy is paramount. “Most people don’t understand what goes into a really well done, accurate drawing, like Mick’s. If I could even give you a taste of how much effort he puts into his drawings, you would be blown away.”

Mehling added that drawings of creatures like dinosaurs resonate with us in important ways. “It taps into something really deep and human about anything in science or discovery. You need to see the thing. Everyone wants to know what these animals looked like when they were alive, and a pile of bones doesn’t really jar the senses the same way as a living thing.”

Although it may be surprising given the required depth of precision, Ellison had no formal training in scientific illustration. He first became interested during high school in Syracuse, New York, when he volunteered doing medical illustrations at a hospital. He attended the Maryland Institute College of Art, but they offered no classes in the field. Soon afterward he moved to New York City, and when he spotted an advertisement for a job at the museum he decided to give it a shot. Destruction of priceless fossils notwithstanding, Ellison’s career path was clear from that point on.

The road to each extinct animal reconstruction he does, though, is rarely so smooth. Back in the paleo-playground of his office, Ellison stares at the titanothere drawing and wistfully describes the satisfaction of a scientifically accurate finished product. “Nobody has seen that, but that’s probably what it looked like,” he says. “I know how inspired I was when I was young and flipped through books, just seeing those images jump off the pages. It’s a great way to bring people into science.”

Did the dinosaurs simply get lucky?

One woman at the intersection of art and science.

Mick is my idol. I have followed his work for years and it’s so great to see him recognized. I’d gladly take a seat in his time machine!

Really nice done profile — and great photo! It’s great to see the artist behind the art, and understand the challenge of what he does.

Congratulations Mick!! So nice to be able to say “We knew you when”. Nice to see you be able to work in a field that has your passion. What a blessing.

I went to art school with Mick and spent a year by his side as a co-illustrator in our first jobs together. I have never met another person like Mick. I treasure our time together and am thrilled to see what he has done in his life’s pursuits.