If genetically modified fruits should be labeled, why not change their color? 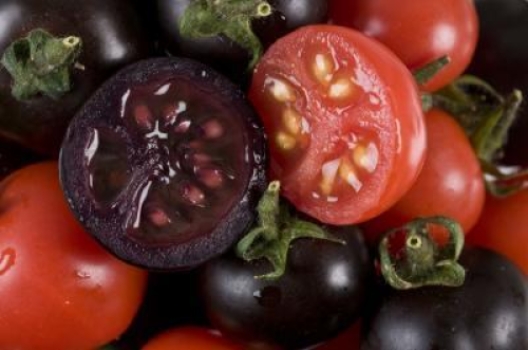 Looking blue. Researchers in the U.K have developed a tomato with the nutrients of a blueberry. [Image credit: John Innes Research Center]

I was six years old when Dr. Seuss introduced me to the green eggs and ham salesman, and I wanted those eggs way before he offered to serve them on a boat and with a goat.

Now that I’m older, I realize that Sam-I-am was quite an honest salesman. He didn’t have to say that his food might have been genetically modified. It was green, so even at six, I knew it was “different”.

Nowadays, I might be a bit hesitant to down a plate of off color meat, but I commend any manufacturer of genetically modified food that is willing to be as bold as Sam—making their products distinguishable by colour. That way, anyone who would prefer not to have them here, nor there, nor anywhere, can easily make that choice.
Scientists at the John Innes Centre in Norwich, United Kingdom have created an odd prototype for what the future of labeling might look like. Their product: a purple tomato that is as rich in nutrients as blueberries. The researchers borrowed a few genes from a snapdragon and mixed them with the genes of a tomato. A few days later, hanging from a vine was a hybrid fruit that, from the right angle, could be mistaken for a gigantic blueberry. While the scientists’ main goal was to make products like ketchup more nutritional without the added cost, they have also achieved clear labeling of a product that has been painted by deep strokes of science. The purple tomatoes are rich in anthocyanin, the compound that gives blueberries their deep hue and is thought to offer protection against certain cancers and cardiovascular diseases.

Genetic modification can be a powerful tool when it comes to food production. It has the potential to help us get around food allergies without sacrificing nutrients, attack pests without harmful pesticides, and purchase fruits and vegetables that can live in the fridge for weeks at a time. Though the idea of a green pepper that doesn’t wilt for six months might be hard for some to swallow, the choice to eat that green pepper or walk right by it on a shelf should be yours.

Researchers in the US have taken more of a Uncle Sam-said- it’s-ok approach to genetically modified fruits. Once the FDA has approved a food item for consumption, American retailers are not required to label it as genetically modified. Almost all papayas imported from Hawaii have been tinkered with to prevent pests. However, you’ll likely never find a sign that says “these have been tweaked” nestled atop a papaya pyramid in any food market.

You have a better chance of finding out if your produce has been genetically modified, if you squint at its price look up (PLU) code. PLU codes are printed on the fruit and vegetable stickers that can be a nuisance to remove. They are meant to tell the cashier how much to charge us for the produce but can also communicate whether a fruit or veggie is genetically modified, organically grown or produced with chemical fertilizers or pesticides. If something is genetically modified, there are five numbers in the code and the first number will be an eight. At least that’s what the inventors of the system, officials at the International Federation for produce standards, are hoping for. The system is less reliable in the US because it is optional for manufacturers to label their products accordingly.

Orange grapes may appear alien next to the white or purple ones we are accustomed to but if they have been modified to provide protein then researchers should stake their bets on appealing to a vegetarian clientele. Let the modified things look modified, just as modified as perhaps green eggs and ham (there’s nothing natural about tofurky, after all).

Being up front and allowing the customer a chance to evaluate their true options is a much better approach than hoping they won’t question the lack of seeds in their orange simply because it looks like the other oranges. Eventually, someone is going to want to taste those odd colored grapes, or perhaps even put those purple tomatoes on top of a salad.

Another useless invention from GM! Why would they waste time and effort making a purple/blue tomato when they already exist via conventional breeding techniques?

“Blue Berries” and “Indigo Rose” are two such tomatoes I’ve grown this year that most definitely have these colours and obviously the same anthocyanin compound.

Genetic modification has been a let down from the get go, it just seems like they now are modifying our foods genes simply because they can, an unnecessary danger I believe!