Why do you feel so awful at high altitudes? 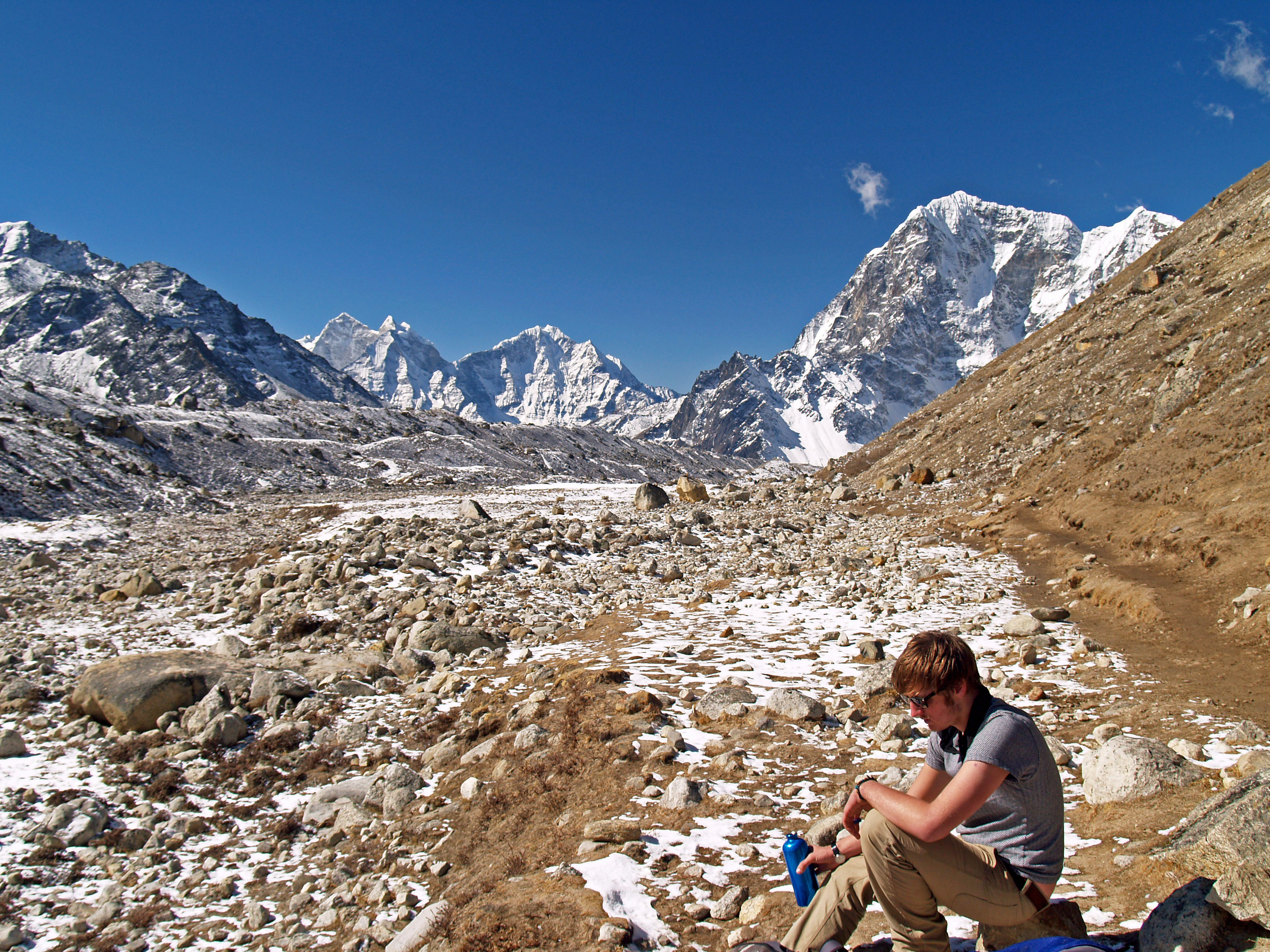 How can high altitude climbers survive with so little oxygen?

Your chest heaves, lungs burning, but you can’t catch your breath. Your head pounds, vision blurring, but you feel like you’ll faint any second. You’re definitely fit enough to climb a flight of stairs without trouble — is this some sort of nightmare?

Possibly, but if you’re up in the mountains, you’re more likely experiencing altitude sickness. When you travel to a place above about 8,000 feet, your body starts telling you there’s something seriously wrong with the air up there. The “thin” air at high altitudes has considerably less oxygen and pressure. This is because the earth’s gravity holds the oxygen close to the surface — so much so that half of the oxygen in the atmosphere is found below 18,000 feet. For comparison, Mount Everest is about 29,000 feet. The highest inhabited town in the world is La Rinconada, Peru in the Andes Mountains at nearly 17,000 feet.

With so much less oxygen, your body has to breathe more to get the same amount of the essential molecule. This leads to the shortness of breath, dizziness and tiredness indicative of altitude sickness. The oxygen drop combined with the decreased air pressure packs a one-two punch to your cardiovascular system. In order for your lungs to breathe air in without duress, the pressure has to be higher outside your body. But at high altitudes, the outside air pressure is lower than it is inside your lungs, making it more difficult to pull in the thinner air and for your veins to pump oxygen throughout the body. As a result, heart rate and blood pressure skyrocket as your body kicks into overdrive. This can lead to more unpleasant symptoms, including headache and confusion.

If altitude sickness goes untreated, though, it could become something much worse: High-Altitude Pulmonary Edema or High-Altitude Cerebral Edema. Both conditions are characterized by extreme breathlessness and tiredness, and could result in death within 24 hours. About one in 10,000 skiers in Colorado get HAPE, according to the Centers for Disease Control and Prevention. Since you could experience altitude sickness, or worse, in an airplane cruising above 23,000 feet, airlines pressurize the cabin to make the air inside feel like you’re closer to the ground.

Doctors commonly prescribe the drug Acetazolamide (brand name Diamox) for patients to take a day or two before they ascend to high altitude locales and for a couple days after they get there. The drug makes your body feel like you’re at a high altitude, so a lot of the symptoms of altitude sickness are side effects. It works by increasing the amount of gases, namely oxygen, the lungs can absorb and then distribute to the blood. Combining Acetazolamide or altitude sickness with alcohol can severely exacerbate the negative effects (trust me).

To limit the effects of the sickness when traveling to high altitudes, you can also avoid exercise, drink plenty of water, and of course, go to a lower altitude. After a few days at high altitude, you should be acclimated to the new height. Your body kicks up production of red blood cells so it can transport more oxygen, making you feel much more normal.

When you return to sea level, the increased oxygen flow will probably make you feel 10 years younger — until your cardiovascular system returns to normal in a few weeks, that is.

Is there the possibility of high altitude visits helping PAH patients?

“Thin air” does not have less oxygen. The percentage is the same as sea-level air. The air pressure at high altitudes is not lower than the air pressure in your lungs. If this was the case, it would be physically impossible for air movement into the lungs. Lastly, veins do not pump oxygen throughout the body. They return oxygen depleted blood to the heart.

Take plenty of breaks if you are hiking up these altitudes.

I would like to see you print a correction on this article so that you help stop spreading the myth that there is less oxygen at higher altitudes. This is completely wrong…just google atmospheric pressure for a real scientific explanation.

“making it more difficult to pull in the thinner air and for your veins to pump oxygen throughout the body.”
This statement is technically incorrect. The HEART “pumps” oxygen-carrying blood throughout the body, through the ARTERIES. The VEINS return the oxygen-spent blood to the heart and lungs.

In case someone has the different high altitude effects, such as headaches when flying, does it help to live at high altitude for some time to get used to the pressure?

High altitudes causes a severe health reaction, such as on Mount Everest, and this is because of the low amount of oxygen molecules in the air. Take Mt. Kilimanjaro for example, it has 630 molecules per breath contrasting to the 1000 molecules per breath at sea level. At a certain point, this can result in death.

The oxygen concentration is still 21% no matter what altitude you at until you get into the 50,000 plus foot range. Its the partial pressure that affects how much Oxygen you actually can breath in. So its no that there is less Oxygen in the air its just got a lower pressure being excreted on it. See Grams gas law..

Why is it on a recent trip to Denver, CO, I not only suffered being short of breath the entire 9 days but also couldn’t carry on a halfway intelligent conversation with my family? It was as though I had left my brain in NC. Could not think right at all, as though I was a different person.

I forgot to mention I suffer from both asthma and COPD. SO SORRY.

it is a known fact 1400 years ago, but now you present the reason change in pressure …. makes one sure he is right !!

No, that fact did not discover 1400 years ago. The person who discovers this as a fact was Paul Bert. In 1878, he published a book on his barometric pressure research. His book called From Physiology to Barometric Pressure. He discussed in his book altitude sickness. Although, I search to find if somebody else discovers that fact; I did not find anybody. But what I found a religion book (Quran), mention { يُضِلَّهُ يَجْعَلْ صَدْرَهُ ضَيِّقًا حَرَجًا كَأَنَّمَا يَصَّعَّدُ فِي السَّمَاءِ} which means {He makes his breast tight and constricted as though he were climbing into the sky} (Alan’amm, 125). Quran was filly written in 632 C.E. I’m actually surprised how can a person climes this fact in the 7th century.

@Medstudent What you have said is true but you should at least give her some credit. She has the general idea.

Are there any studies done on people who have the opposite problem? At sea level up through an altitude of 1,000-2,000 feet or so, I feel like I’m breathing sludge. The time when I lived in the Denver suburbs was much better, but to really feel like I could breathe freely I had to go up into the mountains, around 10,000-14,000 feet. Physically activity was easier up there.

As an aside, I’m finding it amusing that people are objecting that “thin air” does not have less oxygen. It most certainly DOES have less oxygen – per unit volume, that is. Since you breathe in a certain volume of air, not a certain number of molecules, the fact that both sea level air and high-altitude air are about 21% oxygen does not change the fact that a full breath of high-altitude air has fewer oxygen molecules in it than a full breath of sea level air.

You pedantic bitches, none of yall should be allowed to comment. No s*** higher altitudes have less oxygen PER BREATH, all the “armchair scientists” can shove it up their a**. Yall likely had to google what percentage of the air is Oxygen, just to sit there and say “hurr durr oxygen is the same percentage everywhere on earth”. do you know what does change with elevation? THE VOLUME OF AIR, OXYGEN, CO2 EVERYTHING, ENTERING RHE LUNGS. That is what the article says, and that is a scientific fact.

I should think that it would be fairly obvious to any scientist, or even a med student, that with the percentage of oxygen not changing and the volume of lungs staying the same that there would be less moles of oxygen

I was driving over the mountains in colorado n i felt like i was gonna pass out n my heart started beating so fast my whole body was shaky while driving n i knew i had to get to lower altitude so i continued driving has this happened to anyone. I live in colorado just at a lower altitude

When I am above 6k feet I eventually feel like the life force is leaving me and I return to lower altitudes asap. My blood pressure increases I hear my heart pounding in my head and worry that it’s detrimental to my well being.

I have that same problem mike I live at sea level I feel like I’m breathing sludge also when I was on vacation at 6500 feet it felt so much better. I’m not sure what my ideal altitude is to be honest but one reason I found why I’m acclimated to altitude is severe ADHD I wonder if you have that I’m not sure how I would do at 10-14000 feet since I haven’t slept higher then 7000 feet in 9 years but I’m the only one I know with this problem I also do much better in cold weather to I live in south Florida btw and I’m pretty much as unacclimated to south Florida as can be.