A kiss of death 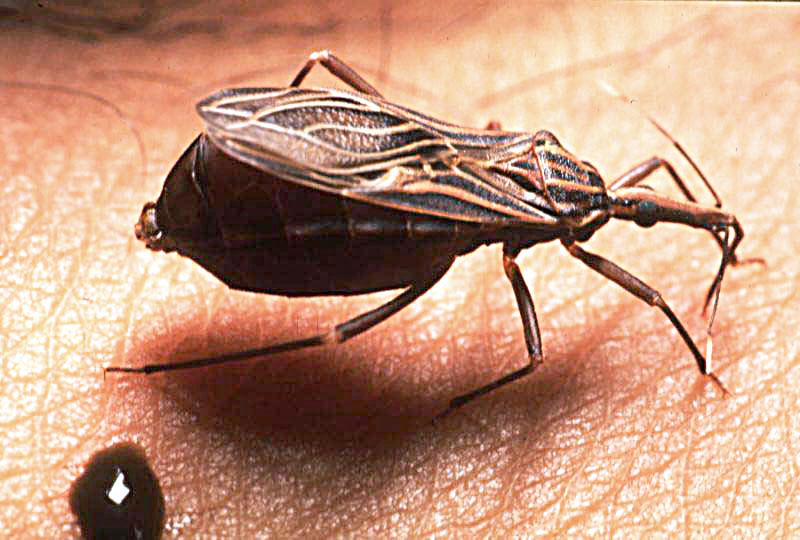 A kissing bug swells with the blood of its victim, and then defecates at the site of the wound, potentially spreading Chagas if the insect is infected. [Image credit: Isalas Montilla, WHO]

A lethal disease spread by so-called “kissing bugs” is spreading quickly throughout the southwestern U.S., a new study shows.

Described by some researchers as “the new HIV/AIDS of the Americas,” Chagas disease afflicts more than 8 million people in South and Central America and over 300,000 in the Southwestern U.S., according to the Centers for Disease Control and Prevention (CDC). But the true toll of the disease, which kills 40 percent of its victims, is difficult to calculate because many cases are never diagnosed. Swollen internal organs, such as the esophagus, digestive tract and heart — its most common symptom — are not unique to Chagas.

The condition has two stages, the first of which is the only time it can be treated. The initial stage is also largely asymptomatic, so it is difficult for those infected to know they need to seek treatment. If a patient is diagnosed in the first stage, it is usually as a result of a routine blood test. And the only treatment is a harsh drug regimen.

A new study published in August in the journal Acta Tropica, found that 61.5 percent of Texas triatomines — the bugs that transmit the Chagas parasite to humans — now carry the potentially deadly parasite, up from 41.5 percent reported in a 2010 study.

The data also challenges the claim, made by the CDC, that most people living with Chagas in the U.S. were infected elsewhere. “Many at the CDC and other agencies are highlighting Chagas as a disease imported through immigration” because of its South American origins, yet its presence in the U.S. mainly comes from parasite transmission, said Peter Hotez of Baylor College of Medicine.

There is “a strong indication that human infection rates in the United States are also increasing,” said Rosa Maldonado, the lead researcher of the study and a biologist at the University of Texas at El Paso. She said climate change plays a major role in spreading the disease. “As temperatures rise, the insects continue their life cycle for longer,” she said, thus raising the risk of human infection.

“The transmission is pretty widespread in the United States,” Hotez said, adding that in Texas the problem is particularly pronounced.

The way these bugs spread Chagas is “pretty gross,” said Paula Stigler-Granados, who studies the disease at the San Antonio campus of the University of Texas School of Public Health. The Chagas parasite isn’t actually transmitted by the insect’s bite, but by its poop. When a kissing bug bites a human or other animal, it has to empty its digestive tract to make room for the incoming blood, so it defecates in the bite wound as it feeds. The disease parasite, a protozoan called Trypanosoma cruzi, is thus directly introduced into the body of the victim via bug feces.

Additionally, the only treatment for Chagas is a decades-old drug regimen that has toxic side effects: anorexia, vertigo and insomnia. The treatment drugs, nifurtimox and benznidazole, have not been approved by the Food and Drug Administration, so clinicians have to get special permission from the CDC to use them for cases in the United States, according to Maldonado.

Even then, Maldonado noted, “the toxic side effects are often so bad that many patients do not finish the treatment.” Maldonado is working on developing chemotherapy and immunotherapy-based alternative treatments, as well as a vaccine, though they won’t be available in the near future.

“These are not rare diseases,” he said. “Why does everyone run to Ebola, which was never a threat to the U.S., but when it comes to diseases of the poor, like Chagas, no one cares?”