Would you be excited about or wary of sharing your name with one of nature's most destructive forces? 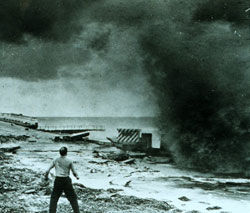 It's a bird! It's a plane! It's Hurricane Andrea!! CREDIT: NOAA

2007 could be a big year for the SERPies. And no, not (just) because we’ll all graduate and find flashy, high-paying jobs. No… in 2007, three of us may have our name immortalized… by a hurricane. (Karen and Melissa, congratulations, you made the list…)

Now, I’ve been excited about the prospect of Hurricane Andrea since I noticed my name at the top of the 2007 list a few years ago. Yeah, I know, I’m a weather dork. If it’s storming outside, you’ll probably find me with my nose pressed to the window hypnotized by the awesome power of nature. So to have a storm with my name is exciting to say the least. And I think it has a certain ring to it, Hurricane Andrea.

But I understand that not everyone is keen on having his or her name attached to such a potentially deadly force. Katrina Voss, a meteorologist for AccuWeather, recently wrote an editorial for the Bulletin of the American Meteorological Society about the experience of having her name become synonymous with total destruction. (I’d like to note that as excited as I am, I certainly don’t want anyone to be harmed. Meteorologists study storms to figure out how to keep people safe from them.)

Voss also brings up the issues of fairness that arise from the way names are given to tropical storms. There are seven rotating lists of storm names for the Atlantic/Caribbean region. They run alphabetically, with Q, U, X, Y, and Z omitted. Originally, only female names were used, but after feminists objected to the practice in the 1970s, male names were added. Since then, both Hispanic and French names have been mixed in with the English ones to reflect all the countries affected by the storms. Names are only added when others, like Katrina, are retired.

But, Voss points out, is it fair to always start with the A names? Should the beginning of the alphabet receive all the attention, no matter whether you consider it a blessing or a curse? Voss points out that we could alternate the lists so that every other year runs backward alphabetically. While I don’t think it’s in serious consideration, it’s an interesting suggestion. The Wendys out there who share my meteorological enthusiasm might be excited to finally be included, but I’ve been waiting for my hurricane for three years now! Don’t switch things up on me now!

Interesting. Given the fact that the number of tropical storms appear to be increasing every year, I don’t think the Wendy’s or even you Andrea will go without the honor and distinction of having a storm actually forming and having it named after you. As far as the stigma attached, What doesn’t kill us makes us stronger. There is alot of good change taking place because of Katrina. It’s the whole lemons/lemonade thing.

Fat chance, Melissa! My hurricane is going to blow your socks off! Batten down the hatches ’cause HERE I COME!

I’m not threatened by your Tropical Storm Karen status…. just dreading the amount of times I’ll have to endure “Sweet Melissa” in sentimentally ironic news footage of the STORM OF ALL STORMS.

Good thing K comes before M in the alphabet, becuase after Hurricane Karen wipes the Eastern Seaboard off the map in the first-ever Level 6 cataclysm, there won’t be any electricity with which to play “Sweet Melissa.”

i would only like if my whole name was put as a destructive forces so when i watch opera on channel 7# my wife will poke fun of me just like when i jump on my friend’s coach. Also As far as the stigma attached, What doesn’t kill us makes us stronger. There is a lot of good change taking place because of Katrina.

36 hours later, The weatherman said:
Hurricane Nicholas has left the coast of Georgia,
There is no more warning.

This hurricane happened on the
coast of Georgia on
July 23, 2004

Is there a hurricane Adam?

Hey. Very nice blog!! I’ll bookmark your site and take the feeds additionally…I am happy to find so much helpful info right here in the article. Thank you for sharing.