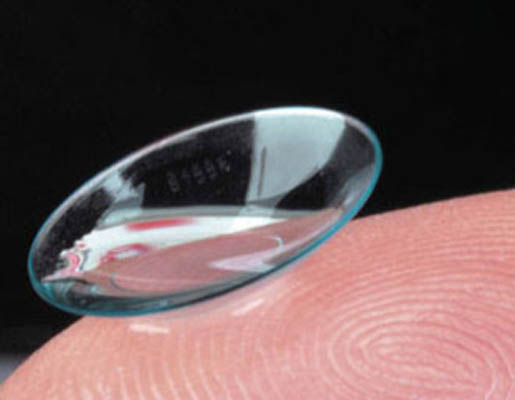 This gas permeable rigid contact lens does not contain water like soft contacts, is resistant to deposits, and is less likely to harbor bacteria. CREDIT: [PARAGON VISION SCIENCES, INC.]

Other than being generally awkward, I’ve spent most of my time since I was 13 getting things in my eye–or rather, getting things stuck onto my gas permeable, “hard” contact lenses. Other formative moments have had me blinking on command so friends and gathered revelers could see the tiny, glass-like chunk in my eye move and resettle.

About four weeks ago, when I was yet again ticking off the reasons why I was lucky enough to have thick lenses directly on my eyeball, it occurred to me that I had been reciting the same spiel–a strange eye shape, really really really bad eye sight–for more than a decade.

What if, the science had changed and I no longer needed hard lenses? What if I should have had years of soft contact wearing behind me, and I didn’t know it, because I was blithely tripping along following the advice of the eye doctor I had during my adolescence.

Turns out, he was a smart man (let the record show I never doubted him). For certain vision corrections, rigid gas permeable lenses provide clearer, more precise vision than soft lenses. This is mainly due to structural difference between soft and gas permeable lenses.

Since soft contacts are traditionally made with water, they can actually dry out, causing their shape to warp and preventing clear vision as well as becoming a potential irritant. To stay hydrated, soft lenses draw moisture from the eye, which can lead to dry eyes. Water also binds to tear proteins making contacts attractive to “pollutants,” such as lotions and soaps, which creates a chunky, gritty build-up on the contact.

Rigid lenses, being stiff, don’t change shape when the wearer blinks, so they stay precisely focused. Not only that, rigid lenses, unlike soft contacts, do not contain any water. Because they are made with silicone polymers, rigid lenses are more oxygen permeable, making them healthier for the eyes (though these days, some soft lenses, called “extended wear,” are made of silicone hydrogel–a substance that allows almost as much oxygen to flow through as rigid lenses, and is less water dependent ).

But this is not to say gas permeable lenses are problemless; they, too, have their downside. When you first get them, you can’t just pop them in right away. Rather, they are broken in by wearing them for increasing amounts of time as your eye adjusts to having a new lump of stuff in it (I believe my doctor told me my eyelid had to form a sort-of groove…). Even if you are lifetime wearer, leaving the lenses out for a few days means going through the process of again .

Also, rigid gas permeables must be scrubbed clean, and soaked, nightly–while soft contacts can be worn constantly, soaked or simply tossed. Hard contacts are more expensive too, as are cleaning solutions (up to eleven or twelve dollars a bottle). But if you don’t lose them or crack them, hard lenses last longer (that’s a big “if”).

So, it seems as though “hard” lenses–full of mystery, science, and silicone–still serve an important function for certain contact wearers. Some last interesting facts about contact lenses:

1. Rigid gas permeable lenses are not the “hard” lenses of yesteryear, which were actually made of an oxygen-impervious substance called polymethyl methacrylate–truly “chunks in the eye.”

2. Gas permeables can also be used for nifty technique called orthokeratology, in which the lenses are worn–usually overnight–to reshape the cornea, leaving the patient with 20/20 vision. The effects of this last only one or two days, however, which is probably why it hasn’t caught on with all contact wearers.

*An interesting side-note: if you are wanting the best of both worlds, there is a new contact out with a rigid center, and soft circumference. Check it out…

I started with hard contacts at 13. I am extremely nearsighted with astigmatism in one eye. The contacts fit amazingly, and my vision was perfect. They lasted for 19 years. During that time soft contacts came along, and they were very expensive. After I lost one of the original pair and cracked the other, I found out the hard contacts were gone and gp was the new thing. I am 66 y o. The gps are good but not the perfect vision I had with the hard. They are thinner, too, and I once had one crack and break in my eye as I tried to take it out. Flipped me out, but no damage was done. And now soft contacts are less than gp, a total rotation. I tried soft, but they felt awful, like a raw egg in my eye, became dry and cloudy quickly, and I couldn’t wear them as long as gp. After 53 years I am tired of taking them out to read something, then putting them back in to see any distance. Was going to buy the bifocal lenses, eagerly hoping this ended the in-to see-out to read-back in to see, etc loop, but after reading comments here, I’m questioning that decision. I can’t wear glasses because my one eye astigmatism is severe and the edges of everything I look at were like a salvador dali painting, melted away and about to fall.

Du to two cornea transplants the stitches of which leave the eye surface corrugated I must were hard contacts to flatten out the cornea surface. But like you I find it difficult to find the correct solution. When I do it is twice the price of soft lens solution. So from the experts what do you recommend.

I’ve been wearing Gas Permeable Lenses for a couple of months. I’ve noticed that they make my eyes red as well as tiny new blood vessel have been created wearing the GP lenses. Will these ever go away? It makes my eyes look slightly red which is concerning.