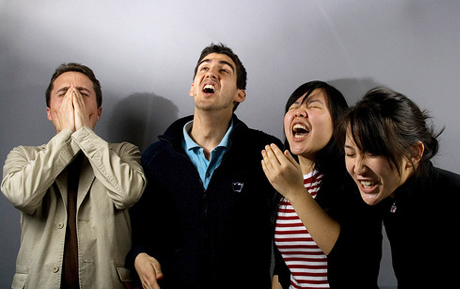 Seeing some crazy flashes when you sneeze? It all starts with the optic nerve. [Credit: Anne Cottingham]

It can be upsetting to see things that aren’t there, whether they be lights, shadows or pink elephants, but when people push their closed eyes, get migraines or even sneeze, they can see a variety of phantom lights and flashes.

All of these luminous visions are caused by stimulation of the back of the eye, or the optic nerve, which transmits the experience of light to the brain. As a child, you may remember surreptitiously pressing on your closed eyelids and watching the undulating patterns of light projected into that hot, dark field. As an adult, if you experience a significant increase in flashes or prolonged visual disturbances when you’re not pressing on your eyelids, it could be a sign of retinal detachment, where the retina is pulled away from the back of the eye. This is a serious emergency and should prompt an immediate visit to your doctor.

Flashes and lights in your field of vision can also be associated with migraine headaches, either as part of the pre-migraine aura or as a visual migraine. But other kinds of pressure and stimulation can trick the brain into seeing flashes as well, and most of these visions are common and harmless.

Inside our eyeballs is a thick gel, which keeps the eye nice and round and plump. This gel can rub against the retina, stimulating the part of the eye that creates images in our brain. When the brain gets a message from the retina, it interprets it as light. So whether there is light entering the eye or not, any stimulation of the retina will be translated into a light show by the brain.

If you see stars or flashes after sneezing, it could be from a pressure on the eye itself, or from stimulation of the nerves that have to do with sight. After standing on your head, or getting up quickly after lying down, blood pressure can drop, and the brain can be deprived of oxygen, changing the environment in and around the eye or affecting the optic nerve.

Also when you sneeze, you create pressure in your chest and head, enough pressure to shoot a sneeze out at 100 miles per hour. The retina can be jostled by the strong force of sneezing.

Another set of visual phenomena that can be mistaken for flashes are floaters, caused by disturbances in the gel inside the eye. These blips are usually either clumps of gel or wayward blood cells, and they are most visible when staring at a bright, uniform background, like a blue sky. Floaters multiply with age, as the gel in the eye becomes more and more fluid.

So if you’re otherwise healthy and don’t have problems with migraine headaches, seeing flashes and floaters shouldn’t worry you. Watch out for an increase in either phenomenon or a significant change in vision as signs of retinal detachment, but otherwise, enjoy the show.

Fascinating! You answered my question and many more I had forgotten to ask, like about the visual migraines. I’m relieved to know most of these symptoms are harmless. Now I can lie around enjoying the show and thinking of more questions.

i found your article very informative.and would like to share my own experience with floaters…they were related to a vitamin B deficiency and cleared up when i started to take vitamin B supplements. thank you for your wonderfully helpful article which i will save for future reference.

I didn’t know that a snot could come out at 100 miles per hour.

O MY GOD I LOOOOOOOOOVE SNOT TOO Mr. Reid! we should get together for a good ol’ booger picking contest! i bet i’ll won! contact me at 1-403-505-8635 and ask for Britt and then immediately yell BOOGERS! really then i’ll know its you and not some other creep telling me to pick my nose on a webcam! Mr. Reid i’m SOOO glad you mentioned the deep topic of snot!

Great Article. Every time i sneeze i see floaters and i was kinda getting worried. I guess im just fine. Very informative and answered all my questions.

Hi. I see a different thing and I would appreciate if anyone out there can give me a head’s up on this.

When I sneeze I see not floaters but up to 15 tubular shaped items which wriggle and swim away. Am a bit freaked out because of this.

sneezes do not travel at 100mph, maybe 30mph tops.

You’ve answered my question thank you very much!!!

These people that are so called doctors and scientists have no idea what they are talking about. The illuminated or electrically charged things I see “tiny specs of moving light” tend to move under there own power or propulsion. They are not all moving at the same speed as they would be if they were in a solution “gel inside the eye” that was disturbed from a sneeze. This can be proved by placing colored sand in a glass of water and stirring it. All the specs move at the same speed and direction if they are in close proximity to one another. Also look at there shape. They are a elongated oval shape and when they change direction they bend in the middle. Next time you have this happen pay closer attention to there movement. You will notice they move at random speeds, they may be moving slowly then dart off in another direction. Also you will see that they appear to be looking were they are going as they are moving. I’m no doctor, 9th grade education but they seem to me to be some kind of micro organism due to there Don’t let people insult your intelligence!

Choon Voon Cheong & Rusty Hardman … yes those are very likely floaters. They can be individual spots as well as connected structures. Under the right conditions – like staring into a blue sky while laying down – you can see these floaters moving around. It is not uncommon according to my eye doctor. I beleive the floaters are just normal organic debris collecting in your eye over time. If you actually see them moving on their own (swimming) then go see a doctor as it could be a live organism – which would be rare.

I’m familiar with floaters that hang around in your vision when you look at a bright diffuse source of light. They look like long strings that don’t do much except float.. Eventually they drift away.
I’m also familiar with what Rusky is talking about. Numerous pinpricks of light moving randomly at various speeds in every direction. I’ve concluded these are microorganisms invisible to the naked eye that get dislodged from their hiding places when we sneeze. The panicky random movement is just them looking for a place to hide.
@Rusky: Sorry, but there’s no need for that sort of tone when commenting online.

I sometimes see floaters in my vision, especially when looking at a bright, blank surface or the sky for example, but I will occasionally see something entirely different. If I sit up quickly from a lying position I will sometimes see tiny, swimming pinpoints of light. Each quickly swimming in entirely different directions. They zigzag as the swim and give the impression of living organisms. Since I was young I always assumed that everyone saw them, and figured that the expression “seeing stars” was the expression that people used to describe the phenomenon.

I see largish white Blobs after sneezing and at other times, moving across my eyes. They are not migraine lights, as I used to have migraines up until about ten years or so ago.
Does anyone else have similar experiences?
Steve

I have never heard or read of this before! Thanks so much for sharing this article. I haven’t experienced this and I hope I won’t as it could really scare the hell out of me. This is very informative and great read indeed!

lil_miss_geekiness, I called the number and no one answered.