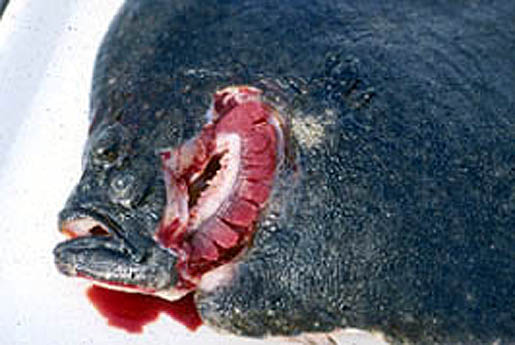 On a foggy morning this past March, Kevin Kayle sat behind his desk, one Gore-Tex boot crossed over the other. He was wearing his profession’s standard uniform: a stoic expression and a crisp button-down shirt adorned with the tri-part buck, eagle and fish logo of the Ohio Department of Natural Resources.

Despite the fish-killing virus lying dormant in the frozen lake nearby, Kayle – whose job is to help manage the fragile Lake Erie ecosystem – insisted that it had been a normal, meeting filled winter. The virus, which does not harm humans, threatens to kill thousands of fish in the Great Lakes this spring, putting the region’s multi-billion dollar recreational fishing industry in jeopardy.

“Oh, we’re just laid-back and waiting,” said Kayle, an aquatic biology supervisor with the state agency. There were only small indications of any underlying anxiety: the nails on Kayle’s thick fingers were whittled down to the quick, and he compulsively squeezed his left index finger with his right hand.

Though the lake has since thawed, and Kayle has completed his first run with a trawl net on Erie’s waters, there is still time to bite his nails: the virus, called viral hemorrhagic septicemia, thrives in water around 60 degrees Fahrenheit, and Lake Erie is currently about 55 degrees.

But the state of the Lakes in the presence of VHS isn’t his only concern. He and others involved with the Great Lakes fishing industry are also awaiting two key decisions from federal agencies. One will outline new fish handling regulations intended to contain the virus, and the other will further regulate the transport of ballast water into the Great Lakes. Many experts think that oceangoing “saltie” ships may be responsible for spreading the pathogen, through contaminated ballast, or water taken on to maintain a vessel’s trim and stability.

“There’s a lot at stake here,” says Jim Johnson, a fisheries station manager for the Michigan Department of Natural Resources. “We’ve just begun pushing this ball down the road.”

Viral hemorrhagic septicemia, or VHS, causes a fish to bleed out, depriving vital organs of blood and filling the body cavity with fluid until the fish dies, usually within seven to ten days. A few exterior signs, such as white gills, trouble swimming, and bulging or bloodshot eyes hint at the crumbling state within an infected fish.

The virus is well known in Europe, where it decimated trout and salmon farms in the 1980s and cost countries millions of dollars in eradication efforts, rapidly spreading from fish to fish via physical contact, the most common transmission route, according to Jill Rolland. Rolland is a veterinarian at the U.S. Department of Agriculture’s Animal and Plant Health Inspection Service, which stepped in last fall as the pathogen spread throughout the Great Lakes region.

“It is the most significant disease of aquaculture,” she says.

In 2003, a Lake St. Clair, Michigan, muskellunge fish became the first North American freshwater species to be diagnosed with the virus. Since that report four years ago, VHS has increased its range and kill numbers. In the 2006 season, “tens of thousands” fish deaths were reported in the west basin of Lake Erie, according to Kayle, whose hands jumped skyward as he described the swollen dead “blowin’ up on shore.” A diver found a similar mass mortality of bottom-dwelling round goby in the St. Lawrence River last spring – the first report of the disease in New York.

Massive die-offs – also observed in Lakes Huron and Ontario – are a major concern for the fishing industry and the federal government. For starters, they are a sociological problem because the sights and smell disturb patrons of lakefront beaches. Perhaps more substantial is the concern that huge die-offs could harm the region’s economy by reducing the number of fish available for tournament and sport fishing anglers. Currently, these activities generate more than $4 billion per year for the region, according to the Great Lakes Commission, a joint American-Canadian agency monitoring the region.

Gary Whelan, fish production manager at the Michigan Department of Natural Resources, says it is unclear what the 2007 season holds: the virus could either continue decimating the ecosystem, or it could blend into the background, only killing weak fish. “Right now is a large period of uncertainty,” says Whelan, adding that even if mass mortalities stop, the virus could potentially spread to inland lakes via the Mississippi River, or get into hatcheries.

In their Fairport Harbor, Ohio, offices, Kayle and company rode out the days of uncertainty by busying themselves with boat and net repairs. The U.S. Department of Agriculture, on the other hand, used the winter to draft an interim rule, to be released later this season. According to veterinarian Rolland, who is co-writing the legislation, the ruling will outline regulations for the import and export of Great Lakes fish in face of the virus. Michigan’s Johnson explains that constricting fish transport hurts both the commercial and sport fishing industries, which depend on moving fish in and out of waterways. Consequently, the fisheries community is anxious to see what the new legislation will say, and how stringent it will be.

Fishermen are also interested in whether ballast water – which they believe was responsible for delivering the virus into the Great Lake’s ecosystem – will be addressed in the new rule. “We can do all these interim [rules], but until you get to the ballast water issue all this is moot,” Kayle contends.

Rolland, who points out that the Department of Agriculture is not convinced ballast conveyed the virus into the region, explains that ballast falls under Coast Guard jurisdiction, so the U.S.D.A. ruling is not planning to address the issue.

For their part, the Coast Guard has been researching possible ballast water standards since 2002 and plans to release their findings, which will affect ships internationally, later this summer. The standards are expected to include recommendations for ballast water disinfection or on-board pump systems for treating tank water.

Some states have taken matters into their own hands. This past January, Michigan implemented a bill requiring oceangoing ships to disinfect with onboard systems before entering their waters. The shipping industry responded by suing the state. Tom Wiater, vice president of InterSHIP, which represents international shippers on the Great Lakes and is a plaintiff in the lawsuit, responds that shippers think it’s ridiculous to install the systems recommended in Michigan’s bill because they were not independently analyzed and might not be endorsed by the Coast Guard standards.“Owners will fall in line to comply [with ballast disinfection] once a system has been approved by the U.S. government,” he argues.

Kayle agrees that a universal standard for ballast regulation is needed. He says without federal rules, the other Great Lake states will probably be reluctant to follow Michigan’s lead and set up their own ballast regulating legislation. In the meantime, there’s not much else he can do except trawl Lake Erie’s depths and wait.

Editor’s Note: This story was first published on May 25, 2007. It was selected to reappear here by our editorial staff while we are away. We’ll be back on September 10.

I really liked the flow of this article.
It was packed with info. But I really liked the “personal” flavor in the description of K Kayle.
The issue concerning the Great Lakes really needs to be addressed because the Lakes are open again, after a long winter, and already
there are problems in the form of red tides and fish kill.

Splendid, insightful, and accentuated with detailed information from those who know the situation. And the pictured aquatic macabre really sold me.