Researchers develop drought resistant rice, but not everyone is convinced it can fight hunger. 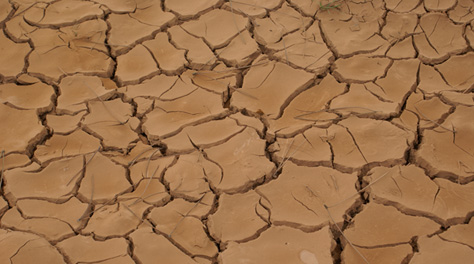 Parched earth bakes in the sun in Portugal. Some scientists hope genetically modified rice will eventually help feed people stricken by drought in countries such as India. [Credit: Samuel Rosa]

Cracked, brown, barren earth is generally not the picture of fertile farmland. However, for scientists developing drought resistant rice through genetic modification, it very well could be.

Drought and a dwindling water supply are increasingly problematic for farmers worldwide. This October, about one-third of the southeastern United States experienced exceptional drought, which caused widespread crop and pasture losses and a severe water shortage. It is the highest drought rating to date, according to the Department of Agriculture’s drought monitor. In Eastern India, where rice is a main food staple, drought resulted in a loss of 5.4 million tons of rice between 1997 and 2003. For farmers, that can translate into an income loss of up to 50 percent.

We are one step closer to reducing the effects of drought, says Andy Pereira, a researcher from Virginia Polytechnic Institute and State University. Pereira and his team have developed a genetically modified (GM) strain of rice that is able to withstand drought conditions and grow with less water during normal conditions, which he believes will help countries like India cope with the harmful effects of drought.

“Populations compete for water, for food, drinking, washing, industry, and rice uses most of the fresh water that we have,” Pereira says. “And I, like many other people, think water is going to be much more scarce than it is right now.”

However, GM crops continue to raise a slew of concerns for people’s health, loss of biodiversity and accessibility. So further testing on its safety and how it interacts with other plants must be done before it becomes commercially available.

To create his GM rice, Pereira inserted a gene into the rice called the HARDY gene. The study, detailed in September’s Proceedings of the National Academy of Sciences, found that rice with the HARDY gene – when grown in drought conditions – had about 50 percent more biomass than rice without the gene. Also, for drought and non-drought conditions, the modified rice used water about 65 percent more efficiently.

The rice is still years away from being available and will likely not be the first GM crop to be planted and consumed in India. A pest resistant eggplant was recently approved for field trials and is on track to be available by 2009. If successful, it could pave the way for other GM crops like rice.

Drought resistant rice could help farmers, especially those hovering at the poverty line, says Sushil Pandey, an economist at the International Rice Research Institute, a nonprofit agricultural research institute near the Philippines. Thirteen million people in Eastern India fall below the poverty line during drought years, he adds.

While developing drought resistant GM rice would be beneficial, Pandey says it should not be the sole solution. It is important for farmers to develop alternative sources of income and for countries to develop better watershed management technology as well, he points out.

Part of the problem with GM crops is that they tend to be more expensive, making it difficult to ensure that farmers at the poverty line will have access. Costs are highly variable, but a 2002 report by the Institute for Agriculture and Trade Policy estimated that pest resistant corn seed cost 35 percent more than conventional corn. Pereira says that he will be working with the International Rice Research Institute to try to ensure that everyone will have access to the rice.

Not all scientists believe that drought resistant rice will be beneficial. Doug Gurian-Sherman, senior scientist in the food and environment program of the Union of Concerned Scientists, says that GM food – frequently touted as reducing poverty and hunger in developing countries – is not always the best option: conventional methods of farming are often more effective.

Gurian-Sherman cites a failed GM experiment in Kenya to develop sweet potatoes resistant to a virus. Because there were different strains of the virus, the use of GM crops did not work. Meanwhile, neighboring countries solved the problem through conventional breeding.

“Technology like genetic engineering has an ‘ooh…aah’ factor,” says Gurian-Sherman. “But there are other sophisticated practices in agriculture and they’re often not being considered.”

One effective alternative to GM crops is organic farming. Organic farming is known to improve soil quality and increase its ability to hold water, which could help cope with drought, he says.

The most important thing is to examine the whole picture before pushing one solution, he notes. We need to decide “what technology works best for sustainability, the health of the environment and the health of the rural community,” he says.