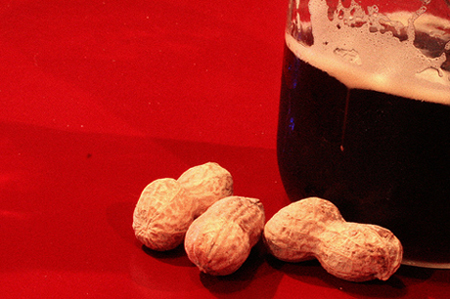 A night out on the town could become a disaster waiting to happen for those with food allergies. [Credit: Mike Chaput]

For me … it all started with beer.

In my early twenties, while friends were kicking back glass after frosty glass of thick, rich beers like stouts, ales and porters, I had already resigned myself to a lifetime of lightweight, watery beer.

I had learned the hard way that drinking those heavier beers meant suffering the consequences: lethargy, itchy eyes, creepy-crawly skin and a persistent tickle in my throat. I chalked it all up to an allergic reaction to some ingredient in those unfiltered pints.

Researchers estimate that 12 million people in the United States, roughly 4 percent of the population, have an allergic reaction to food or beverages. And some doctors and researchers have said that the number of allergies is on the rise.

While there is evidence that allergies to some foods are rising, the picture of food allergies on the whole is incomplete. And if my case is any indication, many people could be reporting something other than a true allergy, contributing to the sense that the numbers are increasing.

“There are good studies showing a rise in allergic diseases like asthma, hay fever and dermatitis but no one was carefully tracking food allergies over the past decades,” says Dr. Scott Sicherer, allergy researcher at Mount Sinai School of Medicine, in an e-mail statement.

He goes on to say that the available research is “spotty and imperfect,” and reports of rising food allergies come from many different sources including allergy researchers, doctors, parents and school nurses.

But it’s not clear that we can rely on many of these reports. Physicians who aren’t allergy specialists thought that the total number of food allergies was three times higher than the current research estimates, according to a 2007 survey by researchers at Louisiana State University. In addition, they often attributed headaches, an unrelated symptom, to food allergies six times more often than specialists.

And we non-physicians appear to be horrible at diagnosing our own food allergies. A 2005 Danish study showed that while 16 percent of adult volunteers reported having a food allergy, only about 3 percent actually showed allergic symptoms when fed the offending food.

In my case, by my late twenties, my perceived allergy seemed very real. My problem had moved beyond beer. I was feeling tired all the time, having gastrointestinal problems and was taking antihistamines regularly for congestion in my sinuses. If asked if I had an allergy at that point, the answer would have been an emphatic yes.

I eventually found out that I’m not allergic, but rather intolerant to high levels of gluten, a protein found in grains and present in tasty, unfiltered pints. Simply put, an allergy is something that gets a response from the immune system and an intolerance is not.

“We do know people may think they are allergic, but really are not and to really know you would need to pull people from the general population randomly and do extensive tests – which isn’t easy,” says Sicherer.

Despite the challenges to determining the number of food allergies, it appears that for some foods they are rising. Sicherer’s own work showed that peanut allergies doubled from 1 out of 250 young children in 1997 to 1 out of 125 in 2002. His study, however, was also based on a sample of people self-reporting their own allergies.

“I find it hard to believe we are imagining an increase,” says Sicherer. “Many of us over the age of 35 remember being in school and having few classmates with problems like these. Now our children have multiple classmates with multiple food allergies.”

Sicherer points to the “hygiene hypothesis” – that our hyper-vigilance against germs via vaccinations, antibiotics and sanitation is actually making our kids more allergic to food and to other things in our environment. The idea is that with no natural bugs left to fight, the immune system starts going after things that aren’t actually germs.

If you find that hard to swallow, others have proposed that as the world gets smaller, we are eating more exotic foods that our systems aren’t adapted to. “One of the classic examples [in the U.S.] is that we never used to see kiwi allergy, but no one ever used to eat kiwis. Now everybody eats kiwis and we have lots of kiwi allergies,” says Dr. Hugh Sampson, a colleague of Sicherer’s, in a 2006 issue of European Molecular Biology Organization Reports.

this was really, really boring. I only read part
of it and i got so board!!!! :(

this was dang bad!!! i was trying to look for info for my project but insted i found this which just wasted my time!!!!!!!!!

i don’t believe the above commenters have food allergies. this article was beneficial to me, a 16 year old who has an anaphalaxis reaction to all dairy (including eggs), all nuts, some seafood, and countless outdoor pollens. How uneducated and narrow minded the human race has become!

I have to agree with Mary. I’m sorry, unknown, but I found this very interesting, and just like you, I’m looking for information for an essay that I have to write. I AM going to refer to this post in my essay because it holds a great deal of information.

This article has no basis for facts!

Here in Canada, Food allergies are very much on the rise!
My son is allergic to all dairy, eggs and nuts/peanuts. We have a friend that also has a child with the same allergies. My daycare provider’s son has similar allergies. The schools are banning peanut butter sandwiches. It’s obvious that these claims aren’t self diagnosed and that this is a real issue! We need to start research on why this has become an epidemic and how to stop it. I’m also of the believer that the West has become overly obsessed with killing germs with hand sanitizers and lysol sprays. We are no longer exposed to live stock, wilderness and pests. We now live in a society that sprays pesticides on foods, we live in our living rooms watching TV, Rub aluminium oxides in our armpits so we don’t smell bad, Shower with 99.9 germ killing soap. And last but not least.. We eat Genetically modified foods! Our body is designed handle the DNA of natural foods that our ancestors ate, Now we are exposing our bodies to food that have been modified at the DNA level. The new DNA triggers our immune system because it’s a new foreign substance! I have a strong belief that humans will be the cause of their own extinction!

Have any of these supposed doctors ever thought that maybe….just maybe.. people are allergic to the chemicals that are in our non organic food? Because I have reactions to foods that are not organic but can eat the same foods that are organic (as in I grew them myself so I know there are no chemicals involved) and not have a reaction. I do have food allergies and some of them I can’t test on my own to see if it is chemical allergy or a real food allergy. Such as tuna. Can’t eat it. Last time I did I almost died and that is when I found out I was allergic to it. Also can’t eat Kiwi’s (as mentioned in the article) because I am allergic to them (lips, tongue, and throat swell). I can’t have dairy products either but then again..cows milk was never ment for human consumption so no big loss there. All you are really drinking is mucus anyways that is all milk really is.

I fully agree with Daddy Daycare. No researcher could get the funding needed to prove that corporation behind GMOs and Pesticides are the one main factor in all the allergy we are encountering. The transformation we got exposed to in the past 100 years (diversity of food, lack of exposure to standard parasites, GMO, and Pesticides, etc…)was too large and too fast for our body to react to.
Demand the return of our normal food and normal life.