How sled dogs can teach us about mercury contamination. 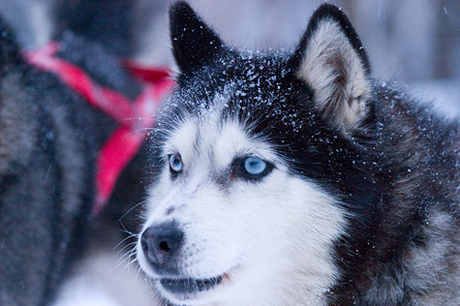 A sled dog’s thick fur coat may do more than protect it from inclement weather: Scientists say it can be used to detect mercury contamination in the environment — and possibly even in humans.

“The foods sled dogs are eating are scraps left over from people in the villages,” said Peter Bowers, an archaeologist at Northern Land Use Research, an Alaskan consulting firm, who contributed to a study published in the journal Science of the Total Environment in October.

Since the sled dog’s fish diet is similar to that of Alaska’s indigenous population, scientists believe the racing huskies can provide a unique insight not only into how much mercury humans are eating, but also into where the toxin enters the food chain. Other animals like caribou and coyotes may not be as suited to predict the element in humans because they are difficult to follow and have different diets. Mercury levels in fish change depending on their location and feeding habits, and testing dog hair from different husky populations that eat those fish shows scientists the areas of high mercury.

The researchers analyzed hair from huskies in five regions of Alaska; they also analyzed a sample from sled dog remains dating back to 780 A.D. Of the present-day dogs feasting on salmon, those from Russian Mission, Alaska — a village near the Bering Sea — had the most mercury, topping out at more than a third of the toxic level. Hair samples taken from dogs at Fort Yukon, 800 miles from the sea, had the lowest mercury levels, which were not significantly different from the control group. In contrast, archaeological samples had roughly half the mercury of the lowest modern-day sample.

“The levels of [present-day] mercury decreased as you go up the Yukon and away from the mouth of the Bering Sea,” said Kriya Dunlap, the lead author of the study and a chemist at the University of Alaska, plus a championship sled dog racer to boot. According to Dunlap, salmon fast when they move inland.

Salmon become contaminated from eating plankton and algae tainted with mercury from pollution. They have difficulty metabolizing the toxin, so it builds up in their systems and gets passed on to anything that eats them — including sled dogs and people. Dogs with more mercury were found closer to the sea where the salmon feed. “It makes sense because the salmon aren’t eating [further inland],” Dunlap said. Mercury accumulates in fats and proteins, and when the fish aren’t eating, they burn off those same fats and proteins for energy. This helps to eliminate the toxin, and may be why fasting fish have less mercury.

Sled dog fur is not the only mechanism to measure mercury. Scientists can also study mercury levels in human and animal organs, blood, breath and hair. Mercury gets into hair through the blood that follicles need to grow hair. Scientists have used hair to test for minerals for about 75 years.

The researchers studied mercury in sled dogs because it’s difficult to get permission to test on people, according to Dunlap. When they do manage to get hair samples from people, scientists can learn about mercury deposits. Human hair grows one centimeter a month, so scientists can track where a person has traveled and compare it with different parts of his or her hair, according to Lori Verbrugge, an environmental toxicologist with the Alaska Public Health Laboratory.

The hair testing method has a big advantage over testing organs, both in people and dogs. “Hair is a pretty good indicator of mercury … and you don’t have to kill the animal,” said Verbrugge.

The archaeological samples of sled dog hair show that mercury also occurs naturally in the environment, like in geologic deposits and volcanic ash. But the recent increase has researchers worried. “Global change contaminates the environment and a large population [in Alaska] still relies heavily on traditional food,” said Dunlap.

Thank you for this article.
I’m a stundent in Hungary, and my diploma work is mainly about mercury.

I have a question: what is the source of the mercury contamination in the region of Alaska? Is it came from local sources or from southern industrialised areas?