Where is the Love?

Even wasps may have the genetic blueprint for motherly love. 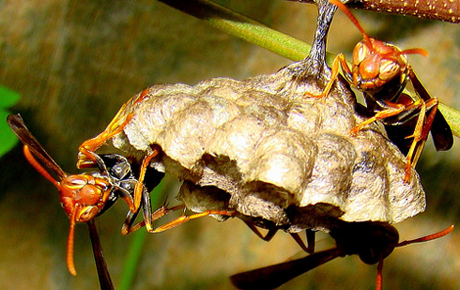 Wasps' behavior is strongly influenced by the maternal care they receive, according to a new study. [Credit: Eric Wheeler]

This Mother’s Day, tell your mom that she has the maternal instinct of a wasp. It’s a compliment. Really, it is. New research shows that some of these insects have motherly love in their genes.

Previous behavioral observations of wasps led scientists to consider that maternal behavior can serve as a stepping stone along the transition from solitary to social behavior. In the first experiment to confirm these observations, scientists at the University of Illinois at Urbana-Champaign used a new sequencing method to show a genetic link between the maternal behavior of Polistes metricus paper wasps and the nurturing and provisioning behavior of the worker wasps.

“Based on gene expression results, brains of altruistic individuals look like maternal individuals,” says Amy Toth, a postdoctoral researcher and lead author of the study, which appeared in the journal Science in the fall.

Although the queen is the genetic mother of the workers, researchers showed that the gene expression of the givers and recipients of maternal care was more similar than those of the mother and offspring. The behavior-related genes provided the molecular basis of this altruistic behavior in wasps. Researchers also found different behavioral gene expressions in the brain of the wasp during the maternal and reproductive stages.

Wasps’ behavior changes over the course of their lives, unlike the behavior of ants and honey bees. Foundresses, who often lead a solitary life before becoming caretakers, assume a maternal role. They establish new colonies and, like a nanny, care for their adopted larvae on their own. When these larvae mature into workers, they mimic this behavior and go on to forage for food and care for their siblings. Successful foundresses become queens after rearing this generation of workers and no longer provide for the younger wasps. But other foundresses ultimately sacrifice their opportunity to reproduce.

The maternal phase seems to provide a connection between less and more evolutionarily advanced stages in the life of a wasp. “This is why it is interesting to study the maternal transitional state between solitary and honey bee-like behavior,” Toth notes.

Nature provides other examples of individuals like foundresses who care for newborns outside their genetic family, such as younger wolves who eat their prey and later regurgitate for hungry pups. These roles often permit higher growth rates and larger families in the animal community, says Sarah Hrdy, an anthropologist at the University of California, Davis.

Genes that help a species survive and reproduce, like those that foster maternal behavior, are more likely to be inherited by the next generation. “The evolution of altruism across species is linked to the preservation of offspring, and the most hard-core manifestation of this is the occurrence of maternal altruism,” says Stephen Post, president of the Institute for Research on Unlimited Love at Case Western Reserve University in Cleveland. Human parents strongly invest in their offspring since they have a limited number of eggs at their disposal, according to Post, who is also a professor of biology, philosophy and theology. He says this underlies the importance of parental tenderness and cherishing.

Like Post, Toth recognizes the uniqueness of humans. But she points out that a lot of criteria for human behavior are found in animal studies. “Animals and insects are more complex than you think,” Toth says.

Because of the sequencing method used in collaboration with the company 454 Life Sciences, which pioneered this technique, these researchers were not restricted to model species such as rats or flies. The new application allowed them to test an evolutionary hypothesis on a species without a genome sequence, which saved researchers both time and money. Instead of analyzing the entire genome, they focused on genes that could be detected in wasp brains and sequenced using this new approach.

Since little data was previously available for paper wasps, bioinformaticians from the Illinois crop sciences department compared the sequenced wasp DNA fragments to parts of the fully sequenced honey bee genome. They found 32 wasp genes, also known to be related to honey bee behavior, and used these genes as the basis for the study.

Wasps and honey bees had a common ancestor between 100 million and 150 million years ago. While their DNA sequences have changed significantly, proteins encoded by these genes that relate to behavior have not. This allowed researchers to confidently identify relevant genes and compare the two species.

Current attempts are under way to broaden the scope of this study, according to Toth. She recognizes that 32 genes are “a lot better than one but certainly not the whole picture.”

Because genes do not act in isolation, these researchers have developed the technology to study 5,000 genes at once. Toth hopes to apply these new methods and technologies to learn more about which genes affect aggressive behavior.

But the significance of this study cannot be overlooked. Rather than using rats, flies or other model species, Toth acknowledges that she and her co-workers successfully studied a species without a genome sequence and “used a sequencing method to get a ton of information about wasp species and test an interesting hypothesis about evolution.”

Really fascinating report Greg! And I like the way you were able to introduce — albeit briefly — the idea of altruism as an evolutionary development, suggesting perhaps the way in which moral systems might have come into being first in animals and then humans. Nice work!

Permit me to test how the comments post different quotation marks: