An Oklahoma scientist chases down the secrets of Alaskan sled dog endurance. 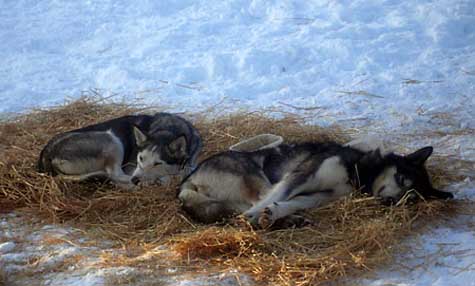 The wall. Marathon runners know it well—that inevitable and dreaded point in the race when time seems to contract, when all forward motion slows and simply planting one foot in front of the other requires superhuman effort.

Exercise physiologists also know the wall and observe that even highly-trained athletes are reduced to a mere shuffle when the supply of glycogen—carbohydrates stored in muscle and liver cells—becomes critically low. For marathon runners, this typically occurs around mile 20. With six miles left to run, their bodies begin to cannibalize fat stores in earnest.

But fat is less than ideal as a source of quick fuel. Athletes, and animals of nearly every species, need nearly four times as much oxygen to metabolize fat than to break down the simple sugar glucose. Even working at maximum capacity, they simply cannot absorb enough oxygen to meet their energy demands when burning fat. Once glycogen is depleted, extreme fatigue begins to take hold, and rest becomes necessary to replenish carbohydrate stores.

But not so, it seems, for dogs.

Michael Davis has spent years thinking about dogs. A veterinarian and professor of physiology at Oklahoma State University, Davis began, more than a decade ago, studying the sled dogs that run the Iditarod, a punishing 1,150-mile race held during the heart of the Alaskan winter. He wondered how these canine athletes can run more than 100 miles every day for ten or more days without seeming to tire.

During ultra-endurance events like the Iditarod, veterans know that racing well depends on a precise nutrition plan. “It is a constant battle,” says musher Brent Sass, “to keep weight on when it’s 60 below and we’re running 100 miles a day.” Sass, who is training for the 2009 Iditarod, says each dog on his team burns up to 12,000 calories per day, 60 to 70 percent of which is fat.

The key to sled dog endurance, Davis found, is an unmatched ability to quickly derive energy from their massive, fat-rich diets. “During the first day of exercise, dogs do everything that human athletes do, effectively depleting [stored] glycogen in muscle cells,” he says. On subsequent days of racing, the glycogen reserves that fuel exercise are simply gone, yet the dogs show few signs of fatigue.

Stranger still, by the later stages of a race like the Iditarod, glycogen stores actually increase, indicating that the dogs are relying almost exclusively on fats for fuel. It is as though a cellular switch is flipped following the first hard day of racing, after which the dogs’ muscles seem to prefer burning fats over carbohydrates.

Sled dogs, Davis says, are an unparalleled example of what physiologists call the athletes’ paradox. In most animals, the presence of large fat stores in muscle cells is usually associated with unhealthy states like obesity and type 2 diabetes. Oddly, endurance training also increases the tendency for muscle cells to absorb and store fat. Training also boosts the response to the hormone insulin, meaning that muscle cells are better able to take glucose from the bloodstream and store it as glycogen. As a result, sled dogs and marathon runners alike are equipped to hoard both fats and carbohydrates and convert them into energy when needed.

The difference between dog and marathoner is partly one of scale. The capacity of canines to pull energy from the bloodstream into muscle cells, Davis says, is 10 to 20 times greater than that of humans. But the difference is also in the ability of dogs to use fat almost exclusively, even when glycogen is available. While he thinks it unlikely that human athletes will ever match their canine counterparts in either regard, Davis does think this research might yet benefit human endurance. Though different in many regards, he says, when it comes to metabolism, dogs are very much like humans.

Some of his colleagues are less certain. “Canine athletes and human athletes do not have the same metabolism; they don’t do things the same way,” says Paula Kislak, a veterinarian and president of the Association of Veterinarians for Animal Rights. “It’s very slow for muscles to accumulate enough fat to provide energy. There are some people who are better at that [than others],” she says. “It seems like the people who have been documented to be able to do that are a better source of information about human metabolism than going to an entirely different species.”

Even so, Davis is planning a series of canine studies designed to chase fats and carbohydrates through the bloodstream and believes the results of this work will apply across species. If we can improve human fat metabolism by even 25 percent, he says, rather than the 400 percent observed in sled dogs, it will herald a breakthrough in human endurance.

Whose mouth is cleaner, yours or a dog’s?

Dr. Davis’ findings about dogs becoming robotic-like while running in the Iditarod don’t square with the documented facts about how the dogs behave. The following are just a few examples of dogs refusing to run. According to the Associated Press, in the 2007 Iditarod, eyewitnesses reported seeing musher Ramy Brooks kicking his dogs and beating them with a chain when they wouldn’t run. A May 22, 2007 editorial in the Anchorage Daily News said, “Rare is the musher who hasn’t lost it with his or her dogs. Ramy Brooks isn’t the first and won’t be the last.” Steve Fossett wrote in his memoir “Chasing the Wind” that he bit his lead dog’s right ear when he refused to keep running. Iditarod race winner Joe Runyan recommends shocking dogs with a cattle prod when they refused to move.

The dogs don’t want to run when trail conditions are horrid. For instance, in 2007, Shain Perrins told the Alaska Public Radio that “Dogs aren’t wanting to go, because they are going right into the wind. It’s probably blowing, gusting up to 50 miles an hour in the valley.”

Dogs don’t want to run when they’re tired. They routinely suffer from anemia which exhausts them. Kathie Davis told the Spartanburg Herald-Journal that one of her dogs fell asleep in the middle of a run. Martin Buser’s dog Quebec vanished from his gangline while he was on the move – and Buser had failed to notice.” Buser found Quebec curled up in the snow to nap, right where he’d come loose.

In Anchorage, several years ago, a musher’s dogs got loose from his truck. They didn’t run over 1,000 miles to Nome. They didn’t even run to the outskirts of the city. They were found curled up, sleeping on people’s lawns about ten blocks from where the musher’s truck was parked.

The blood tests dogs receive do not detect all the performance enhancing drugs they may be given. The dogs are not tested for all the common drugs. And there are so many new drugs, including synthetic versions, that it’s even hard for testers of humans to keep up. But even knowing what drugs to test for isn’t enough. Gene doping works on dogs and it’s impossible to detect.

I’m delighted to see scientific research into sled dogs. It doesn’t surprise me that these wonderful animals are made to run – they’re just a short hop from wolves who run their food down.

Thanks for the post and keep up the good work.