Scientists listen to the mating songs of disease-carrying mosquitoes in hopes that they’ll use what they learn to control wild populations. 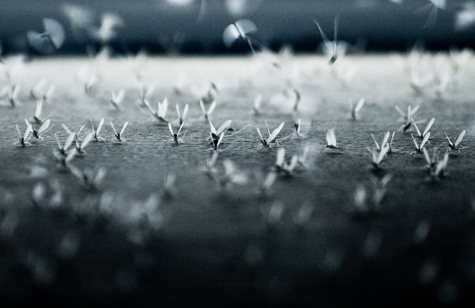 Researchers have been listening to mosquito mating songs with hopes of eventually controlling the
disease-carrying insects in the wild [Credit: Martino's doodles, flickr.com].

Researchers at Cornell University have been listening in to this pre-mating music of a species called Aedes aegypti. A. aegypti carry a painful, potentially fatal disease called dengue fever, which affects 50 million people in urban tropical areas, according to the World Health Organization. The team at Cornell found that before mating, male and female A. aegypti synchronize the noise made by their wing beats at a frequency higher than anyone previously thought mosquitoes could hear. The researchers hope to use this new information about mating to ensure that genetically engineered mosquitoes, made for disease control, could reproduce with wild populations.

“If you’re going to create a genetically modified mosquito, you need to make sure that he is still as sexy and attractive to females as a normal mosquito,” says Ben Arthur, a postdoc who worked on the study. According to this finding, he says, researchers will need to test that the lab-reared mosquitoes can hear.

To study the high-pitched A. aegypti mating songs, researchers pinned male mosquitoes through the midsection without affecting their ability to beat their wings. Scientists then flew female mosquitoes past the immobilized males, and used a special microphone to record the noises that the insects made.

The microphone measured the speed of passing air particles, which is how mosquitoes detect sound. Mosquitoes hear through a bulb-shaped organ at the base of their antennae called the Johnston’s organ, which detects the air particles displaced by vibrations.  Human ears, on the other hand, detect the change in pressure caused by displaced particles.

A graduate student and insect specialist named Lauren Cator analyzed the recordings and found that the mosquitoes matched each other at a high hum of 1200 Hz. Next, she needed to prove that they could hear the sounds that other mosquitoes were making.

To do this, Cator worked with Ben Arthur, a postdoc in a Cornell animal communication lab. Arthur placed tiny electrodes in the mosquitoes’ Johnston’s organs to see if they sent signals to the brain in response to certain sounds. These electrodes picked up activity when the scientists played recordings of the opposite sex, which meant that the mosquitoes could register the noise.

“I would be very surprised if this weren’t true of the attraction of other mosquitoes as well,” says Arthur. Cator, in fact, spent the last three months in Tanzania listening to the mosquito species that carries the malaria parasite to see if they have similar mating behavior to A. aegypti. She’s busy analyzing the recordings now.

Eventually, Cator wants to apply her research toward a method of controlling disease-carrying mosquitoes in the wild. The method involves sterilizing male A. aegypti by manipulating their genes in the lab, then releasing the infertile males into areas with a high incidence of dengue fever or other mosquito-borne diseases. Theoretically, wild female mosquitoes would mate with these males and waste reproductive resources like eggs, energy and time. Since many of these females would fail to reproduce, the wild mosquito population would diminish, and fewer people would catch dengue fever.

For the method to work, scientists would need to make lab mosquitoes at least as sexually attractive as wild males. “Right now, we don’t really know how to rear the males so that they could out-compete wild males because we don’t know what females use to choose a wild mate,” says Cator. She believes that her research brings scientists a step closer to manufacturing a male mosquito with the qualities that female mosquitoes look for in a mate.

Any mosquito mating information is good information, says Marjorie Hoy, a biological control expert at the University of Florida who is unaffiliated with the study. “When you rear insects in the lab over many generations, they may not perform as well as you would like them to in the field,” she says. Based on the findings from this new study, researchers would need to ensure that lab-reared male mosquitoes intended for release could vibrate their wings fast enough to attract a mate and hear well enough to recognize her.

Currently, researchers can’t release lab-engineered mosquitoes into the field without re-capturing all of them. This United States Department of Agriculture policy is intended to protect ecosystems from the unknown effects of genetically altered animals. The policy limits entomologists like Cator who want their findings to reach the field in the form of swarms of unrecoverable sterile insects.

But the United States government is establishing new guidelines for genetically modified organisms, and USDA policy may change soon. Researchers working on transgenic organisms are waiting in the wings and accumulating knowledge about mosquito behavior and physiology—knowledge that Cator believes is crucial for any form of wild-population control.

So the next time you’re dive-bombed in a blood-sucking mosquito meet-and-greet, listen in. Their love songs may hold the key to their undoing.


The arms race for a new malaria vaccine.

Wasps have a natural instinct for motherly love.

Obscure diseases that can be cured on the cheap.

Well, authoress Shelley, this is a mighty interesting article. As a musician I was enticed by the title. In a HS music appreciation class I once took recorded songs of whales to class as a “stumper” when the questiion was raised as to where that sound originated. The music of mosquitos would do likewise I bet…you better believe that I myself will certainly hear the sounds of ALL these insects with an enlightened mind. Thanks for opening my ears! :-)