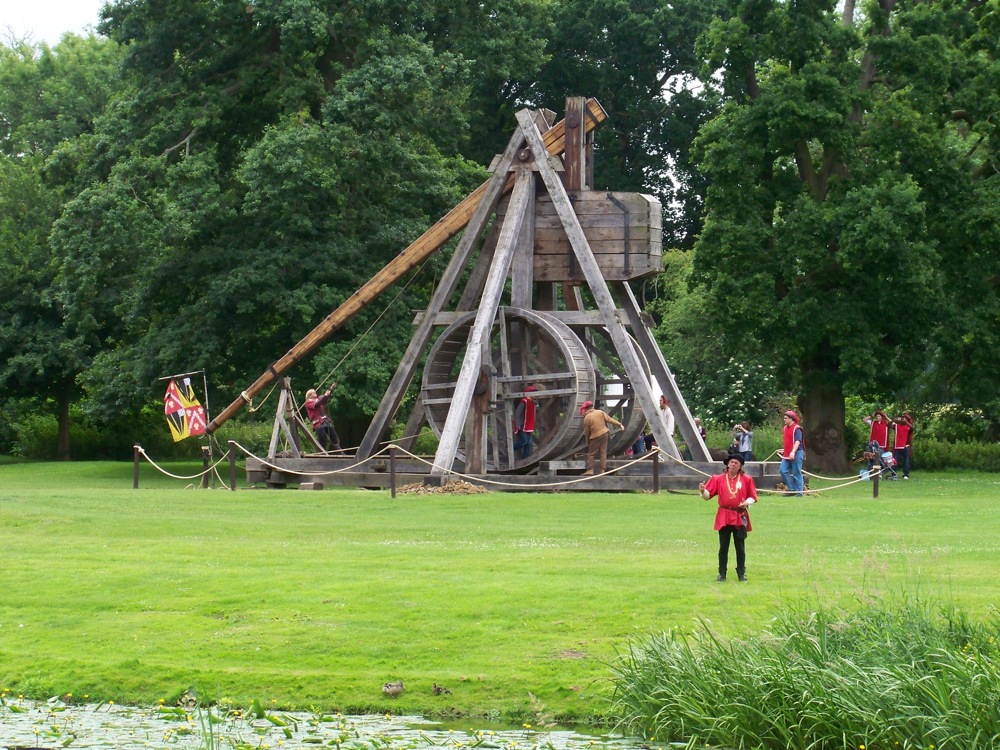 The children fidgeted in their seats, eyeing the craft materials on the table with anticipation as they tried to absorb the lesson of the day. “What does a catapult do, and what would you use it for?” asked the teacher. The answers poured in with eager excitement from her students, revealing a lot about their personalities. The class clown said, “It flings things!” The budding warlord was all about strategy: “You’d use it to defend your home turf from enemy forces.” And every classroom needs a daredevil: “To slingshot yourself!”

It’s not a normal conversation in most classrooms, but this is the New York Hall of Science, and here, catapults are an accepted part of the learning process.

October was Catapult Month at the New York Hall of Science, and the museum offered a variety of activities involving catapults of various types and sizes. This is only the second year for the program, but it’s already becoming a big draw for families: 85 people attended on a sunny Sunday afternoon for the demonstration of “Chuck,” the 19 foot-tall outdoor catapult. Families with children of all ages sat on a grassy hill, waiting anxiously for that exhilarating moment when Chuck would spring into action, launching a gallon jug of water across the long field, leaving a tail of water worthy of a comet in its wake.

Prior to the demonstration of Chuck there was a family catapult workshop, where kids and their parents spent the morning building a tabletop trebuchet (a type of catapult) out of wood, nails and string. Decoration of these fearsome weapons was encouraged, and many participants used markers to scrawl DESTROYER or TREBUCHET on the sides of their new toy, thrilled with their new vocabulary of destruction.

Catapults weren’t always so family-friendly. In the past, they were a siege weapon, which invading armies used to lay waste to castles and walled cities until the advent of the cannon and firearms. Historians have found evidence for their existence as early as the 9th century B.C. in what is now Iran. Karl Szilagi, who helped build Chuck, said “there’s a danger aspect to it” that people find appealing.

Though some participants hatched plots against their younger siblings, for the most part there was little danger in the catapult workshop. Instructor Madelaine Hartman encouraged experimentation with different types of catapults, including simple rubber bands, and spoon catapults with a paper cup as a base. “See if you can recreate it” was her mantra for the experimental portion of the class. Soon, marble-sized bits of modeling clay were zinging past ears, turning the classroom into the inside of a popcorn maker.

But amid the chaos, kids were learning. There was the taunting — “No, YOU’RE a projectile” — common to 10-year-old boys, but the group was figuring out what worked and what didn’t. One boy in a green t-shirt observed that angling the spoon catapult differently would affect the projectiles’ trajectories. And another turned to his friend, who was having trouble firing the rubber band, and asked, “Dexter, do you want me to teach you how to do it?”

The workshop on October 17 consisted of 11 kids, mostly male, around 8-10 years old. One 10 year-old named Justin was thrilled at the very prospect of the activity. “We’re going to make our own? To keep?” he asked excitedly.

As he started construction with a single-minded fervor, his mother, Katherine, looked on, stepping in periodically to help him hold pieces of wood together as he pounded at the nails with a hammer. “My son has such an interest [in science], I don’t know where he gets it,” she said. “He wants to be a scientist.”

That dedication to science at an early age is what the Hall of Science is trying to foster with its educational programs. “There is science everywhere, every day, in every little thing,” Hartman said. “The point is to remind them of that.”

This is an inspiring article. To read about kids getting so excited about science and discovery is heartening ( even if all of them may not realize it yet because to them its just fun, which is how it should be). Well-written and well-done.

Delightfully interesting and inspiring—-GREAT article!!! —Many Thanks, and keep up the Great Work!!!!! Auntie Wisty