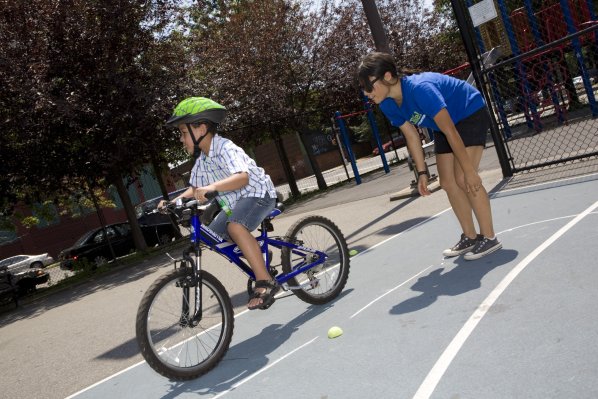 A kid takes his first turns around a tennis court as he learns to bike. [Image Credit: Emilia Crotty]

Emilia Crotty serves as Education Operations Director for Bike New York, a non-profit organization that teaches people to ride bicycles and, more recently, has started encouraging New Yorkers to brave the streets. Emilia spoke with Scienceline about the benefits of biking and how she encourages people to change up their transportation methods, particularly with the city’s new bike-share program, coming in the summer of 2012.

How did you learn to ride?

I grew up in Massachusetts on the southeast coast in a little ocean-side town … The parking lots near us were littered with sharp shells, so my dad told me that I learned really quickly because if I fell once, I was falling down onto the shells.

Bike New York started teaching kids how to ride bikes in the late 1990s. How did it expand its offerings to other age groups?

The need came when an adult would call and say, “Well, my kid is 15, can she come to your class?” So then we decided to have an adult class. From there, all of our classes have been developed.

How do you encourage people to become more regular bikers?

I like to remind people that they can be flexible and ride when it’s possible. With the bike share program that’s coming to New York — 10,000 bikes, 600 stations — I think that’s going to really change how people think about getting around, in that it encourages people to be multi-modal.

Bike-share programs began in Europe, and have been wildly successful. Do you think bike-share will catch on the same way in New York?

If you look back at Copenhagen or Amsterdam, 30 or 40 years ago, these cities did not look like they do now — they were car-centric too. But they made a concerted effort to change people’s perception. A lot of people have a misconception that it’s just natural, that Danish people are born on bicycles. But there was a lot of policy and education. I think we’re getting there  — with gas prices being really high, with the whole green movement and people being a lot more conscientious of their footprint. And with the recession, people can’t afford to drive anymore and even metro cards are getting more expensive. So people are just turning to the bicycle as sort of “Oh hey, that’s not a toy … maybe I can still ride one as an adult.”

Does Bike New York encourage people to bike to help them be healthier?

We don’t hit people over the head with it … but it’s definitely in the back of our minds that when you’re encouraging kids to ride, you’re giving them one more thing to do that’s physically active.

What’s the takeaway lesson you try to instill in your students?

To have the confidence to get out there on the road. It’s just about owning your space, and saying, “You know what? I’m just as important as you are, driver, and I might delay you five seconds by being in the middle of this lane, but that’s OK because my life is worth it.”