The chemistry of a glow stick 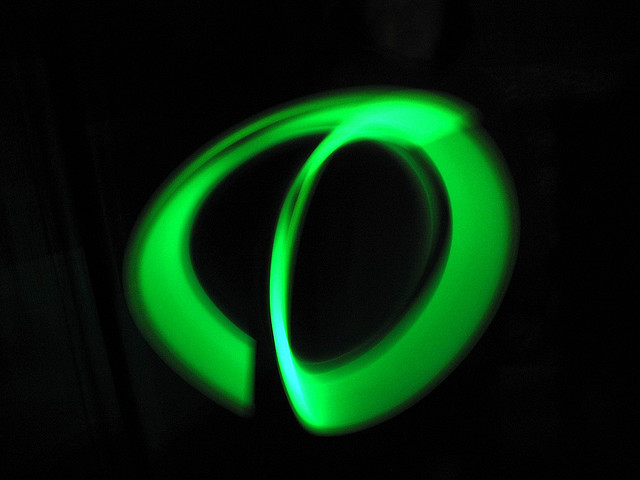 There’s something gratifying about a glow stick brought to life. Bending it in half produces a crisp snap that elicits both a tactile and an auditory sense of relief, akin to cracking one’s knuckles or popping bubble wrap. Swishing the liquids inside produces a burst of light that rivals any neon sign. Some sort of chemistry voodoo must be at work. Funnily enough, the chemical reaction that takes place mimics one of the most famous examples of paranormal activity: the séance.

Fluorophores are the molecules that emit the fluorescent light. Though different fluorophores have different chemical structures, they all have one thing in common: rings upon rings of interlocked carbon atoms. Think of these carbon rings as people who want to communicate with the dead. Each person holds hands with his or her neighbor, forming a continuous circle. In addition to this physical connection, there’s an intangible aura shared evenly between everyone. On the atomic scale, this mystical energy is actually a diffuse cloud of electrons distributed equally among the carbon atoms. Without it, the fluorophore won’t emit light.

Trapped in the glow stick is a glass capsule containing hydrogen peroxide. Like a restless spirit, it has boundless energy to unleash. Bending the glow stick cracks open the capsule, unleashing the volatile liquid into the fluorophore solution. It doesn’t interact with the fluorophore directly, though, just as the spirits only contact the séance members through a medium. Instead, it reacts with diphenyl oxalate, a molecular middleman capable of interacting with the hydrogen peroxide.

The spiritual medium who leads the séance undergoes a drastic transformation, eschewing her own identity and instead channeling the deceased. Diphenyl oxalate also transforms in a violent manner, breaking down into alcohol and carbon dioxide while releasing a vast amount of energy. The electrons shared between the fluorophore’s carbon rings harvest the energy and quiver in an excited state, just as the collective consciousness of the séance attendees is elevated to unprecedented heights. However, this mania can’t be sustained indefinitely. The electrons of the fluorophore release that excess energy in the form of brilliantly colored light before eventually returning to normal.

Of course, this involves more than a single fluorophore molecule. Millions of fluorophore molecules whip themselves into a frenzy after a taste of that potent organic chemistry cocktail. Though each one dances to its own chaotic tempo, the whole ensemble radiates a sense of euphoria. It’s no wonder that that these things are a staple of rave culture.