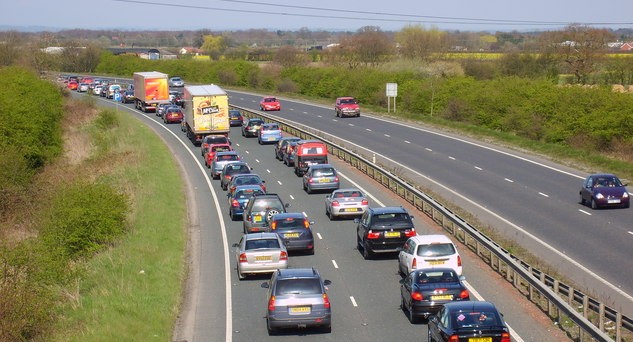 What would people pay to avoid this? [Image credit: Sam Kelly]

The fervor for carpool-only lanes is cooling thanks to HOT competition: High-occupancy toll lanes that are open to anyone but usually charge single drivers more. Over 20 U.S. states have gone HOT, with one of the biggest projects, 28 miles of new roadway on Washington D.C.’s Capital Beltway, set to open later this year.

With the effectiveness of carpool lanes called into question by experts and drivers alike, priced lanes seem to be the next choice solution for addressing congestion. They also help raise money for road maintenance. However, priced lanes so far have been less than perfect and drivers aren’t exactly eager to see the cost of driving go up.

“We need to get away from the idea of being able to travel wherever you want, whenever you want, for free,” says Dave Schumacher, a principal transportation planner for the San Diego Association of Governments. “That’s where pricing comes in.”

Priced lanes are a fairly recent innovation, dating back only to 1995, and the way they work varies. Some are free for carpoolers, requiring a fee from everyone else. Some make everyone pay the same toll. Others give reduced rates to carpoolers. A few, including the Capital Beltway’s, will alter their tolls throughout the day depending on how traffic is flowing — a technique known as congestion pricing. Carpool lanes, on the other hand, are restricted to vehicles that have a minimum number of occupants, generally two or three, and they are enforced by police and cameras. If a car holds the proper number of people, the lanes are free to use. If not, the driver can be fined. Another difference between HOV and HOT lanes is that the former have a much longer history, dating back to the early 1970s.

The longevity of carpool lanes, however, may not be a testament to their success. “We don’t necessarily know that HOVs are working despite many years of building them and researching on them,” says Sharon Shewmake, a post-doctoral fellow in law and economics at Vanderbilt University.

In her own research, Shewmake found that studies of carpool lanes’ effectiveness don’t usually consider environmental impacts and the complex costs and benefits involved in their operation. Instead, these studies tend to focus on basic indicators such as average vehicle capacity, violation rates and public opinion about the lanes. With evidence lacking, Shewmake worries that carpool lanes, often touted as environmental policy tools, may actually be making traffic worse.

In fact, many experts believe that carpool lanes, which usually require two to three passengers, may restrict access, actually causing an increase in overall traffic. Karthik Konduri, a post-doctoral fellow in engineering at Arizona State University, came to a similar conclusion in his research. “Just looking at the HOV and its potential,” he says, “We don’t think that it is doing a lot.”

Konduri and his co-authors applied data from the 2001 National Household Travel Survey to hypothetical scenarios to find out the potential impact of changing one lane on a three-lane freeway to carpool-only. In their most optimistic scenario, they imagined that every multi-occupant trip was motivated by carpool lanes. The most pessimistic scenario was that only trips that were non-work-related and included at least one non-family member were due to carpool lanes. In the end, they found that — in these hypothetical situations — carpool lanes could decrease the number of vehicle trips by anywhere from one to 37 percent. Within this large range, however, the authors believe that the real effect of carpooling is closer to a one percent reduction, because they feel their most pessimistic scenario is the closest to reality.

Carpool lanes may have little impact on overall traffic, but adding single-occupancy lanes isn’t a good alternative either. Gilles Duranton, an economist at the University of Toronto, found in his research that the distance people drive increases proportionately to the amount of roadway on interstate highways. In other words: as soon as news roads are constructed, they fill up. Duranton concludes that new roads will not stop congestion and carpool lanes aren’t much better. “HOV lanes do a little of something, but not that much,” he says. “The one thing that we know is doing something is to make people pay.”

That is exactly what the Virginia Department of Transportation is doing on the Capital Beltway. Once the Beltway’s express lanes are finished, every person who uses them will have an E-ZPass, an electronic transponder that will record their tolls and charge them accordingly. The express lanes will use variable congestion pricing — their tolls will be in constant flux, depending on the flow of traffic. When average speeds in the express lane fall, for example, prices will go up to discourage people from overcrowding the lane. Steve Titunik, spokesperson for the department, estimates these tolls could range anywhere from $1 to $8 per segment in order to maintain speeds of 40 to 50 mph. While Titunik is optimistic about the express lanes’ future, he admits that there is opposition — in particular, the Slugs.

The Slugs are a group of over 10,000 D.C. area residents who participate in spontaneous carpool formation, or slugging. Generally, they line up in commuter lots and wait to fill seats in cars headed to their desired destination. This gets Slugs a free ride and their driver a pass to the carpool lane, which requires three or more passengers. According to David LeBlanc, avid slugger and webmaster of Slug-lines.com, the Slugs are worried that the new express lanes will even out the speed of all the lanes, eliminating the advantage drivers get from picking up Slugs.

“I think the Slugs would support HOV 4 over HOT lanes,” says LeBlanc. He hypothesizes that requiring four passengers per car would both reduce congestion and increase slugging. Transportation planners favor pay-to-drive lanes instead, he says, because they’re more interested in raising toll revenue than reducing congestion.

Titunik says Washington commuters would never accept more carpool-only lanes, but he acknowledges that toll revenues are essential to financing the $1.4 billion Capital Beltway project. Most of that revenue will end up going to Fluor, the construction company, and Transurban, which will operate the tolls.

Regardless of who is paying for it, Ross Trumble, a blogger for War on Driving and a resident of (currently toll-free) Arizona, argues that having toll lanes on public land is unacceptable. He also worries that the installation of toll roads would open the floodgates to other driving expenses. “Photo ticketing, citations, fines, fees start to get ratcheted up with toll roads after time because they [the people managing the roads] have the authority to do so and the courts to enforce it,” he says.

Duranton, the Toronto economist, says such opposition is misinformed, and that tolls are too low, not too high. “Road tolls in the U.S. are particularly ridiculous,” he says. “You know, when you have to stop at the toll, so you can pay 25 cents. I view that as being entirely stupid. That does not even pay for the guy who’s collecting the toll.” Instead, he estimates that an optimal toll would be around 4 to 6 cents per mile in normal traffic and about $1.55 per mile in heavy traffic. Duranton points out that, although the U.S. doesn’t have much experience with toll roads yet, they’ve worked well in places like London and Stockholm.

Congestion pricing is still in its infancy but it’s growing fast. Schumacher, of San Diego, says that many traffic planners are now suggesting that every freeway have tolls. That way, he says, “people would more cautiously think about when they travel and the impacts it has on the transportation system.” It might even help avoid the construction of more lanes, he says.

As more lanes turn HOT, however, opposition from drivers may increase. In Atlanta, for example, new congestion-priced lanes have gotten a hostile reception from drivers who complain about the cost and say traffic is as bad as ever. The mere concept of pricing alone tends to be unpopular because many people believe freeways should remain free. Trumble is one such person. “In the part of the country where there aren’t toll roads,” he says, “We’re doing just fine without them.”

All the experts agree that there is no single answer to our traffic travails because driving is a very complex behavior. For now, carpool lanes still function well in many areas, according to Schumacher. On the other hand, Duranton is convinced that HOT lanes will ultimately prove to be the best solution for curbing rush-hour traffic, even if overcoming political opposition to the lanes takes decades. “It’s going to take another 50 years,” he says, “before we get into that kind of situation and can actually drive during peak hour.”

When gas powered aueblooimts started coming around, I’m sure those were pretty inconvenient (not like there was a gas station on every corner right off the bat) and expensive compared to the alternatives. The Volt is hopefully the first step of many into making electric car driving practical, affordable and efficient. Nobody is expecting everybody out there to jump on the bandwagon, but I think focusing on the progress is just as important as focusing on the deficiencies