"Who's Afraid of Vagina Wolf?"* 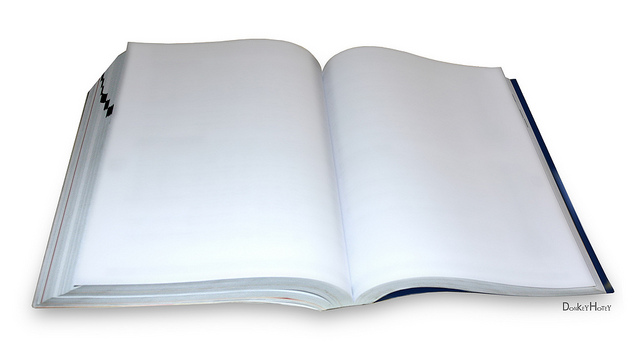 “Dopamine is the ultimate feminist chemical in the female brain,” writes Naomi Wolf in her new book “Vagina: A New Biography.” The Twitter reaction was harsh. I haven’t read this book and don’t plan on it. If you’re in the same boat, this is the primer for you. 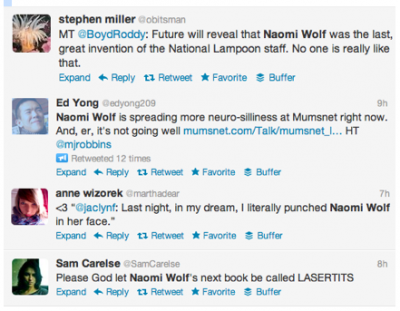 “An astonishing work of cutting-edge science and cultural history,” according to the book description. It opens with Wolf facing an “unexpected medical crisis”: her orgasms just aren’t as good as they used to be. Her search for a solution leads her to conclude that the vagina is a part of the female brain, to which it is connected by a series of nerves, the spinal cord, and chemical messengers like dopamine and oxytocin. She builds a version of a cultural point-of-view on this newly discovered “mind-vagina connection.”

A San Francisco native, Naomi Wolf is a political activist, journalist, writer and social critic. Her book “The Beauty Myth” was an international bestseller in 1991. She was a Rhodes Scholar at Oxford.

That’s why scientists think it sucks. Ed Yong explained in his Slate piece on oxytocin, a neuromodulator and hormone sometimes called the “moral molecule,” that sweeping assertions about individual molecules are oversimplifications at best and dangerous at worst.

The problem really is that Wolf makes leaps of logic that indicate she’s a bit confused. It’s about as coherent an argument as the parody “Pasta: A New Biography” by Sarah Ditum. Here’s a good breakdown of what’s wrong with her science, and why she would be better not talking about science at all, and staying in the less concrete realm of “culture.” She says stress negatively affects vaginal tissue, which it does, but not vaginal tissue in particular — all tissue. And with neurotransmitters, she reduces their function to the most feminist-friendly facet, but they have many functions in men and women, for good an bad.

*I was pleased with myself when I came up with this pun, and chagrined to learn it’a already the title of a not-yet-released lesbian dark comedy.

Kathryn Doyle recently graduated from the College of the Holy Cross, having majored in biology and English. Undergraduate studies led her to a small field research station in Mexico for a few months in pursuit of whales and to a summer at Universita Ca’Foscari in Venice, Italy, in the more relaxing pursuit of travel writing. She is happy to let life take her back to New York, her home state, and to SHERP. @doyleschmoyle

An in-depth look at what I only touched on here, from Maia Szalavitz

She does a great job of parsing the actual neuroscience from the neurobollocks.

The book sounds like a bunch of pseudoscience, however I would caution you the danger of having an opinion and writing about a book you haven’t read. I have a daughter in college and it was a struggle teaching throughout her public education to write about what you research and read, not what you are told or hear about.

You are a good writer and I would be interested in reading your article after you read the book. I’m sure you would have many salient points of your own.