What is it like to get a skin allergy test?

Spoiler alert: my arm is on fire. 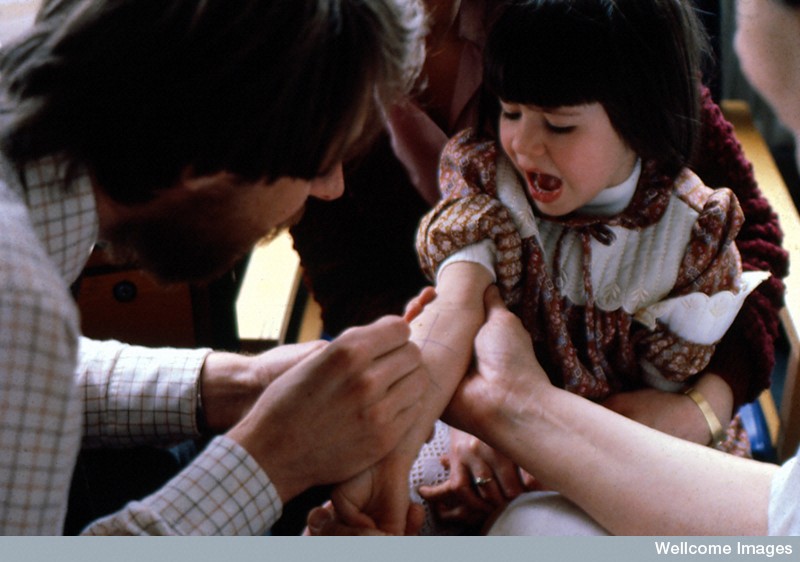 Recently I went to get my very first skin allergy test. You’d think in 23 years of having allergies I would have done this by now, but no – that’s what responsible people do. I am not one of them.

I gathered the basics of what was going to happen from looking at helpful/terrifying videos on YouTube: The person in the lab coat would draw a bunch of lines on my arm and then prick me with small amounts of allergens, specifically inhalants. Then we’d wait and see how I reacted.

Since I’d never gotten a test like this done before, I had no idea what kind of reaction to expect. I have pretty severe seasonal, food, and pharmaceutical allergies, but they’d never actually been diagnosed by someone who, you know, diagnoses allergies. Maybe nothing would happen and I’d just been making it up this whole time. Or maybe by the end of the day my arm would be covered in so much hydrocortisone cream they’d never let me back for fear of running out.

In just a few minutes, the answer was pretty clear: I am allergic to everything. Trees, grass, dogs, cats, friends, happiness, the outside world in general. My body hates all of it. Within a minute of the first pinprick, my arm was already starting to react with burning red splotches. Five minutes later, those familiar little raised bumps began to appear. And then they got bigger.

The nurse felt so bad for me that she brought me an ice pack for my arm and then kindly reminded me I had another 10 minutes to go. Great.

Mercifully, the doctor brought me into her office early and began to take notes on my reactions. “You’ve won the prize this week!” she said in a tone that I think was supposed to make me feel better. It was pretty clear that my worst reactions were to trees, grass, and pets. So let’s never, ever go for a picnic, okay?

But the doctor told me a few other interesting things. First off, she confirmed my suspicion that my food allergies were really just symptoms of something called oral allergy syndrome (OAS). In OAS, the body basically mistakes fruits and vegetables for seasonal allergies. So, if you have OAS, you can predict what groups of foods you’ll be allergic to based on whether you react to ragweed or grass, for example. I’m allergic to both. So, in addition to the annoying itching I get from tomatoes and avocados, I’ll go into anaphylactic shock if I eat a piece of cantaloupe.

The doctor also told me I might not be allergic to penicillin like I thought I was. I’ve been told since I was a kid that penicillin will kill me, but apparently that allergy is just ridiculously over-diagnosed. I’ll be going back to be tested for that, which is apparently a pretty involved process that requires a series of successively higher doses until you see a reaction. So, stay tuned for that.

Days later my arm is still itching. And Caitlin Q. Davis, my colleague and blogging partner in crime, will be getting her allergy test done in a few weeks so we’ll be able to compare our results! I wonder if hers can top mine… 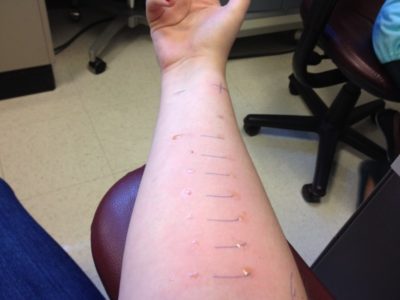 What is it like to get a skin allergy test? http://t.co/KfGE6J6e

What is it like to get a skin allergy test?
http://t.co/jsi6injJ

What is it like to get a skin allergy test?: Spoiler alert: my arm is on fire. http://t.co/35LLNdV2

RT @scienceline: What is it like to get a skin allergy test?: Spoiler alert: my arm is on fire. http://t.co/35LLNdV2

RT @scienceline: What is it like to get a skin allergy test?: Spoiler alert: my arm is on fire. http://t.co/35LLNdV2

“@scienceline: What is it like to get a skin allergy test?: Spoiler alert: my arm is on fire. http://t.co/i1cnxgHn” hey I wrote a thing!

What is it like to get a skin allergy test? http://t.co/beeBWsvN

RT @eczemasupport: What is it like to get a skin allergy test? http://t.co/beeBWsvN

RT @eczemasupport: What is it like to get a skin allergy test? http://t.co/beeBWsvN

I know the feeling! I have OAS too and when I went for a prick test my welts spread out across my whole arm, about 2″ worth. It was a real test of will power to not run for the nearest bucket of water!
They also tested my lung capacity before and after, and gave me a shot of an inhaler prior to the test in case I had a reaction. Of course I reacted, and my lung capacity had shrunk, even after the inhaler. The challenge is always figuring out what to cook, and how to tell people you’re allergic to everything ;p

You didn’t mention the PAIN!!!

It’s ironic that this type of allergy test is known as a “scratch test”, when they’re NOT “scratching” your skin, they’re STABBING it! >:(

Of course, I’ve encountered worse pain in my life, but the test was very unpleasant. ;_;

Just had this Saturday. Uncomfortable for 5 minutes. Started wheezing again, just got that under control. Two days later, still a little itchy where I tested positive (stay away form tumbleweeds) already knew that. Not getting the twice weekly shots, although did it 30 years ago and it helped my asthma 90 %.

HI! I just came across your post here when searching for allergy skin testing burning and itching. I just was like you, waited far too many years to get tested (23 in my case as well!) and I have severe OAS… anaphylactic reactions too, to many things including apples, cantaloupe, and romaine lettuce! This allergy “scratch” testing was the worst. Should be called “poke you with a small needle and itching and burning serum test.

I had no idea I’d have to lie in burning, searing pain and the worst itchiness for 15 minutes! they did the test on my back. I think there were 60 things I was tested for. The numbers went from 1-61… and this was on my back! I may have cried a little and called my hubby to get my through the 15 minutes! LOL! When the time was up the nurse felt NO sympathy for me. I asked her to rub my back with the papertowel she was using to wipe off the ink and allergens and she ignored me! I was like it itches so bad please scratch or rub harder! It was weird sounding but I was desperate! LOL. Next time husband is coming with me and he will itch for me when Im done. Anyway thanks for sharing your experience with the testing on your arm. My back feels like I got a sunburn. Plus I was a zombie afterwards despite the prednisone and the allegra antihistimine they gave me!

I had an experience with my Dad in the hospital. The doctor said, he needs some skin allergy test if to know if my Dad is allergic to any medicine. Seeing my dad doing the skin test, makes me feel afraid. I really don’t want to undergo such allergy. Good to know, I have never been in the hospital and don’t encounter such allergy test.