One drug is dismantling the lethal injection protocol, shot by shot 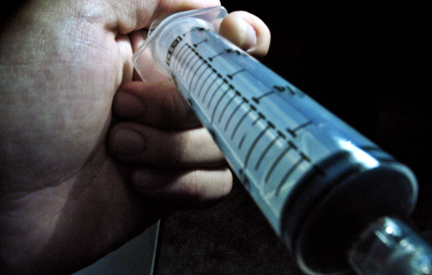 The switch from sodium thiopenthal to pentobarbital in lethal injections is having larger consequences than state correction officials ever anticipated [Image Credit: y0s1a via stock.xchng]

Is there really a truth serum?

How does lethal injection work?

It is hard to imagine that Oklahoma Chief Medical Examiner Jay Chapman could have foreseen the storm now raging around the three-drug lethal injection protocol he engineered in 1977. But recent moves by Oklahoma and most other death penalty states to change the first of the three drugs is giving death penalty opponents new leverage in attacking lethal injection – as is currently the case in Maryland – perhaps inching the death penalty closer to its demise.

Chapman and other medical professionals welcomed a revision of the protocol because of growing doubt surrounding the efficacy and availability of sodium thiopenthal, which is no longer manufactured in the U.S. What they didn’t expect is that a slower acting and, many argue, less effective drug called pentobarbital would replace sodium thiopenthal, leaving the door open for lawyers to argue that death by lethal injection is “cruel and unusual punishment,” banned by the U.S. Constitution.

Executioners are essentially “chemically burying someone alive and then injecting them with an extremely caustic chemical,” says Dr. David Lubarsky, a professor of anesthesiology at the University of Miami whose 2005 study on lethal injection played a major role in the U.S. Supreme Court’s 2008 decision allowing inmates to challenge the states over their protocols.

The three-drug protocol, a series of three successive injections, has been the preferred execution method in the U.S. for years. It is responsible for about 1,100 deaths in 35 states since 1982. The first drug – then sodium thiopenthal, now pentobarbital – is designed to anesthetize inmates, so that they are unaware and pain-free. The second is a muscle relaxant designed to paralyze. And the third, potassium chloride, stops the heart, explains Dr. David Waisel, a professor of anaesthesiology at Harvard Medical School who recently testified in a five-year-old class-action suit challenging Pennsylvania’s lethal injection protocol.

But executioners are not trained medical professionals. And since the switch to pentobarbital, their lack of experience and medical know-how has had serious consequences. Executioners have not been waiting long enough for the first shot to take full effect before administering the next two, says Lubarsky.

The problem is that pentobarbital is not an anesthetic – a drug that induces loss of consciousness – and has never been tested as such, according to Waisel. It is a sedative that doctors typically administer in small doses to calm patients during a procedure, while maintaining their awareness.  In larger doses it can induce a coma, which can be useful in patients who are experiencing seizures because the drug allows the brain to rest before it starts functioning once more.

After the switch from sodium thiopenthal to pentobarbital it didn’t take long for executioners to realize that pentobarbital takes much longer to take effect than its predecessor: 10 to 20 minutes, instead of three to four minutes, according to Miami’s Lubarsky. So while the executioner might think the inmate is comatose, “the prisoner might just be sleepy,” and capable of feeling the intense pain of the subsequent, heart-stopping injections, says Lubarsky.

Some doctors disagree with Lubarsky’s assessment, however. During a court hearing in Alabama in March of 2012, Dr. Mark Dershwitz, anesthesiologist at the University of Massachusetts, noted that the dose of pentobarbital used in the state’s protocol is “far in excess” of that used to induce and maintain a coma following a brain injury. So there is little risk that the inmate could feel pain during the subsequent injections.

But debating what a prisoner did or did not feel shortly before dying is no easy task. The only way to test lethal dosages is to test these sorts of drugs on animals, which is far from ideal given how different other species’ body chemistry can be from ours. And animals aren’t exactly known for giving us clear feedback about how much pain they are in. So when American veterinarians use pentobarbital to euthanize your pooch, they are required to first make sure the dog is either unconscious or deeply sedated before injecting a lethal dose into their body cavity. In fact, in the state of California, injecting a conscious animal with pentobarbital is a crime.

The three-drug protocol was first employed in Texas in 1982, five years after it was initially developed. It was quickly adopted by other states because officials wanted to make executions easier for witnesses to watch – prisoners sometimes caught fire during electrocutions – and more humane.

“Everything went along fine for the first thousand executions in the U.S. They were all with the same three drugs and it had a long history,” says Richard Dieter, executive director of the Death Penalty Information Center, a Washington-based non-profit organization.

However, physicians in many death-penalty states, including Oklahoma’s Chapman, eventually began pushing for a revision of the protocol. In part, they were worried about looming shortages of sodium thiopenthal. Hospira Inc., the drug’s manufacturer, had planned to move manufacturing to Italy, but ended up stopping production altogether in 2011 because of the Italian government’s opposition to capital punishment.

But there were also growing doubts about sodium thiopenthal’s efficacy in knocking out inmates before executioners administered the other two, more painful drugs. A study by Lubarsky and his colleagues, for example, found that the concentration of sodium thiopenthal that the executioners were injecting in the inmates was actually lower than the concentration used in most surgical procedures. And in 43 percent of the cases analyzed, the concentration used would have left the inmates aware of what was taking place. But because the second drug is a paralyzing agent, the inmates were unable to communicate their pain once the final drug was administered.

Switching to pentobarbital was supposed to solve these problems. “The assumption was, we’ll just substitute this drug in the same amount and it won’t constitute a substantive change. But it is,” because pentobarbital is a slower-acting drug, says Lubarsky.

Death penalty opponents are now taking advantage of pentobarbital’s slowness to grind executions to a halt. To avoid these legal challenges, some states have decided to do away with the last two drugs, adopting a protocol consisting of a very large dose of pentobarbital instead. “The states said, look, we are not going to be administering any painful drugs, we are just going to be administering the [drug that’s supposed to act as an] anesthetic,” says Dieter, of the Death Penalty Information Center.  “And in sufficient dosage to eventually cause death.”

In the single injection procedure, pentobarbital puts the brain’s electrical activity to sleep so the cells don’t fire, Lubarsky explains. “You need your brain to fire to keep breathing.” According to Lubarsky, when you inject an inmate with a very large dose of pentobarbital, the respiratory center of the brain stops responding, the diaphragm stops contracting and the inmate dies of asphyxiation.

Compared to the error-prone three-drug injection, “It is probably a more humane way to end someone’s life, if done correctly,” he says.

But even this simpler protocol is not always carried out correctly. South Dakota recently executed inmate Eric Robert using a compounded version of pentobarbital, which is not FDA approved, because Akorn Inc., its most recent manufacturer, has been limiting prisons’ access to the drug. Akorn Inc. decided to exert some control over how its drug would be used because of consumer backlash.

Compounded drugs are designed for patients who are allergic to certain ingredients in commercial medications. Small pharmacies acquire the necessary raw materials and make drugs to the recipient’s requirements. “In this case, there is almost no regulation, no oversight, and minimal testing,” says Harvard’s Waisel, adding that this increases the risk that the drug’s quality will be subpar.

And so, a fungus-contaminated drug made its way into a South Dakotan executioner’s hands on Oct. 15, 2012. Robert reportedly opened his eyes during the execution, which, according to human rights group Reprieve, could be a sign that the contaminated drug did not properly anesthetize him.

Because getting commercial versions of pentobarbital is now almost as difficult to obtain as its predecessor, sodium thiopenthal, Pennsylvania is also planning to use compounded drugs during its executions. The state is getting them from the same pharmacy responsible for the recent meningitis outbreak that killed 33 Americans.

“We were confident in the efficiency and accuracy of the drugs and had them verified by a third party,” says Susan Bensinger, deputy press secretary at the Pennsylvania State Department of Corrections. Declining to disclose the identity of the third party, Bensinger says that the department views the use of compounded drugs as safe, adding “other states have used them as well.”

But that is only one of the death penalty issues the state is now facing. During a recent federal lawsuit hearing challenging capital punishment in Pennsylvania, Harvard’s Waisel noted that those who prepare the lethal injection drugs in Pennsylvania do not follow standard drug label guidelines that regulate the color of the drug’s label and bottle cap to avoid mix-ups. Because the labels are the wrong color, there is a “high risk” that executioners may administer the drugs in the wrong order, he says. These recent blunders, combined with pentobarbital’s weaknesses, are now making some states consider alternatives, like propofol, a fast-acting hypnotic agent. But obtaining new execution drugs may be extremely difficult because drug companies want to be associated with saving lives, not taking them, says Maya Foa, head of Reprieve’s Stop Lethal Injection Project.

Dieter, of the Death Penalty Information Center, agrees, and points out that there were just 43 executions in the U.S. last year – far too few to generate a high-volume profit for manufacturers. Pharmaceutical companies care about their image, which they carefully craft to give people confidence that their drugs will help them live longer, he says. Finding out that your prescription is also being filled by executioners is “like finding a rodent hair in a McDonald’s hamburger – it just scares people,” Dieter said.

So while lethal injection opponents probably don’t envisage doing away with the death penalty through market shares and profit loss, it is possible they will one day hail “image” and “branding” as one of the tools that helped burst the execution bubble. And as public scrutiny intensifies, the drug switch’s role in dismantling the death penalty will become more and more apparent, because, as Dieter sums it up, “the death penalty is really just one problem after another.”