A new product aims to change the way we sit 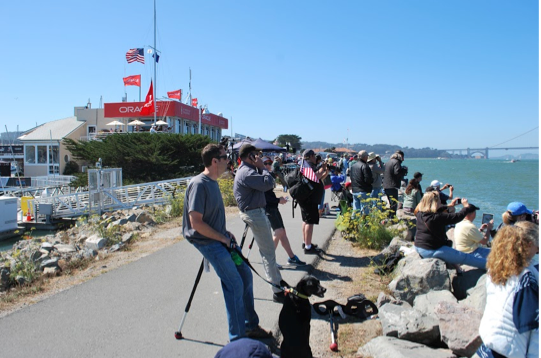 Mogo, “the human kickstand,” is a portable lean-on seat that addresses two little-known physiological facts: sitting and standing can be bad for your spine and moving throughout the day can reduce health risks associated with these common postures.

Upright workstations, such as standing desks, are nothing new. But the Mogo, launched Sept. 10, extends these ergonomic benefits beyond the cubicle – working to prevent back, neck and shoulder pain and avoid the potentially lethal hazards associated with sitting long hours. Created by shoe designer Martin Keen, the Mogo weighs two pounds and costs $100. It’s the first of its kind and looks more like a stick than a seat, but Keen and his company, Rhode Island-based Focal Upright Furniture, are optimistic, resting their half-full glasses on experts’ beliefs.

“The healthy spine in a neutral position assumes an S-shape,” said Rani Lueder, president of consulting firm, Humanics Ergonomics Inc. Sitting and standing either flatten or elongate this natural form, exposing us to injury. It is no surprise that back pain is one of the most common medical problems, according to the NIH, affecting 8 out of 10 people at some point during their lives. When sitting, usually hunched over in a right angle position, the lumbar curve flattens into an unhealthy C-shape, explained Galen Cranz, author of “The Chair: Rethinking Culture, Body and Design.” This posture “can lead to back pain and weakness, slipped discs and possibly compression of internal organs,” she said. Both Cranz and Lueder agree that standing maintains the natural ‘S’ shape but, over time, standing also leads to leg fatigue and elongation of the spine – like an ‘S’ straightening out – which can produce health problems such as leg edema, swelling of the legs associated with lack of movement.

“A perched position, somewhere between sitting and standing gives you rest without harming your back,” Cranz said. A 2006 study led by Dr. Waseem Bashir, a radiologist at the Ealing Hospital in London, used whole-body positional magnetic resonance imaging to determine that a trunk-thigh angle of 135 degrees is the ideal posture for preventing chronic pain and spinal deformity. In an upright, 90 degree seated position, volunteers had significantly more spinal disk movement from weight placed on the spine and a reduction in spinal disk height, signifying greater wear and tear.

The Mogo places you into a 135-degree position, maintaining the natural S-shaped spinal curve. Like a spyglass telescope, the Mogo comes fully collapsed and easily extends, adjusting for heights from 4-foot-11 to 6-foot-8. The seat doubles as the carrying case and screws into the top, where you place your full weight and simply lean, until you’re halfway between sitting and standing.

“The Mogo allows you to retain good posture wherever you are,” said Mary Keen, executive vice president of Focal and the wife of its inventor. Unlike similar products such as Muvman (German), Move Stool (Norwegian) or Salli chairs (Finnish), the Mogo is portable, promoting an on-the-go lifestyle, which, experts agree, is key. “We’re hunters and gatherers meant to be on the prowl, and this gizmo may help people live more like that,” Cranz said. She and Lueder note that periodic movement is essential to avoid the biomechanical stress that comes with holding any single posture over time.

The Mogo won some fans at a recent product marketing event at the Teknion design showroom in Manhattan. “I’d buy it for my grandkids’ sports games,” said Dan Schafer, a sports psychologist. “My knees and back don’t hurt.” The company says more than 400 have been sold since the September launch, with customers ranging from painters to professors. “I’ve grown literally and figuratively tired of standing at every event I attend. My Mogo makes it much easier. I even lecture from it, ” Brooklyn Law School professor Jonathan Askin wrote in an email.

Not everyone is a fan, however. “I don’t know how and where I’d use it. Who wants to lug it around for the occasional chance they’ll need it?” asked Terry Stewart, an interior designer. Hannah Waite, a former collegiate athlete and current New York University law student agreed: “How this is compatible in my everyday life is really the issue.”

The Mogo’s producers remain undaunted. “I know we’re swimming upstream. We’re riding a wave that we’re a little ahead of,” Mary Keen said. Paragon Sporting Goods and B&H Photo in Manhattan are already selling the seat and Focal is pursuing progressive corporations like Google, where they envision boxes of Mogos sitting at the entrances to empty conference rooms. “We’re looking to mainstream,” said Keen. “The product addresses the world and the people who live in it. Its acceptance is inevitable because it makes sense.”

This is interesting. And proves there are cynics at every turn. Can’t see a use for it? Don’t buy it. But if you ever go to events like golf tournaments, auto races, Disneyland, long walks on the beach, if you have a need to sit frequently like my mother used to need, or if you just need a place to rest on a long walk, get this. I’m sure it’s very light weight and can even be used as a walking stick or strapped to one’s side when not in use.