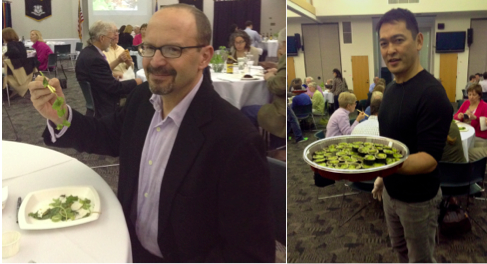 Chef Bun Lai tossed a big bowl of weedy salad, dressed it with an invasive seaweed-based dressing and told the 75 people sitting hungrily, “This salad took us about 11 hours to forage. There’s garlic mustard, dandelion greens, and Japanese knotweed in here — all wild, invasive plants, that, at this point, I hope are edible.”

The laughter abated, and the guests took their first bites as invasivores.

On May 13, conservation biologist Joe Roman and acclaimed Chef Bun Lai discussed the problem of invasive species and served up an unpredictable solution at Middlesex Community College in Middletown, Conn. The talk and tasting was a fundraiser for the Rockfall Foundation, a nonprofit organization focused on environmental conservation and education.

“People grumble about invasive species like kudzu or talk about garlic mustard in their gardens, but they rarely see the problem as a whole, nor do they realize their food choices could have an impact,” said Rockfall’s Executive Director Claire Rusowicz, who organized the event. “We wanted to raise awareness, get people thinking creatively and do something a bit unusual.”

Roman introduced the crowd of environmentalists, professors, Rockfall supporters and foodies to the issue at hand: There are more than 30,000 non-native plants and animals in the United States ravaging native ecosystems and posing a serious threat to natural biodiversity, human health and our economy. Eradication is the ultimate goal, and growing knowledge of the problem can help with early detection, but once a rapidly-spreading alien species is entrenched in a new environment, this is often impossible. The United States spends more than $130 billion a year on damage and control efforts such as habitat manipulation and pesticides, yet many of these invasive species can be managed (and maybe even eliminated) for free. From periwinkles to burdock, invasives are commonly eaten in their native regions and, if prepared correctly, can be quite delicious. “It’s highly unlikely we’re going to eat any of these species to extinction,” Roman noted. “But, we’ve had a pretty good track record — just look at what we did to the passenger pigeon — of hunting and eating a species to just about zero.” What’s needed, Roman pointed out, are open minds and empty stomachs. 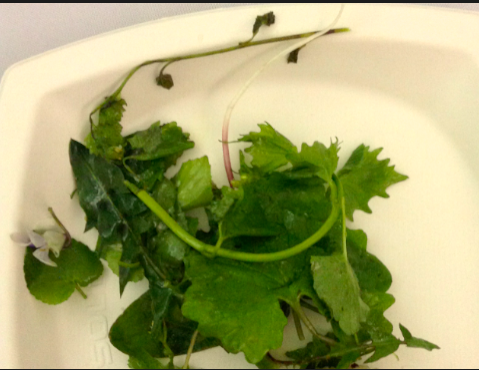 As “Editor ‘n’ Chef” and founder of Eat the Invaders, a website dedicated to invasive species information and recipes, conservation biologist Roman is a leading ambassador for the invasivore movement. “Eating like this is just way more sustainable,” Roman told the crowd, as Lai nodded in support. Substituting invasives for over-consumed species is an easy way to support native habitats and reduce pressure on strained resources, Lai noted. As an added bonus, Roman pointed out, “Think of all that plastic and packaging we’re not using.”

Yet for all their praise, Roman and Lai warned the aspiring invasivores to proceed with caution. Lai stood amidst the diners effortlessly breaking apart and peeling the bark off a large stalk of Japanese knotweed, used in the sake being poured at each table. “Eating it isn’t hard,” he said, popping a small piece of the rhubarb-tasting, bamboo-looking invasive, which ranks 37th in the list of 100 of the World’s Worst Invasive Alien Species, into his mouth. “The trick is to make sure the soil you’re foraging from isn’t contaminated, so check with your local parks department or someone who knows the area before you go out.” Roman reminded attendees that the whole point of consumption is elimination. Regardless of how smooth the sake goes down, spreading the species is the worst possible idea.

Understanding the essential caveat, guests shifted their gaze from the biologist’s slides to the chef’s knife. “These dishes are all made from either invasive or wild plants and animals,” said Lai, as he finished preparing an assortment of sushi rolls and placed them onto large, circular trays for service to each table. His restaurant, Miya’s Sushi in New Haven, Conn., is a sustainable sushi outpost with unusual combinations and invasive species on the menu. “What’s coming around to you now is sushi with blue catfish, an invasive in the Chesapeake, where it is threatening native species,” said Lai, checking in with Roman who gave a big smile and thumbs up to ensure his accuracy. Lai continued, “On that tray over there we have jellyfish sushi — jellyfish are one of the most ubiquitous invaders on the planet and they’re freaking delicious.” 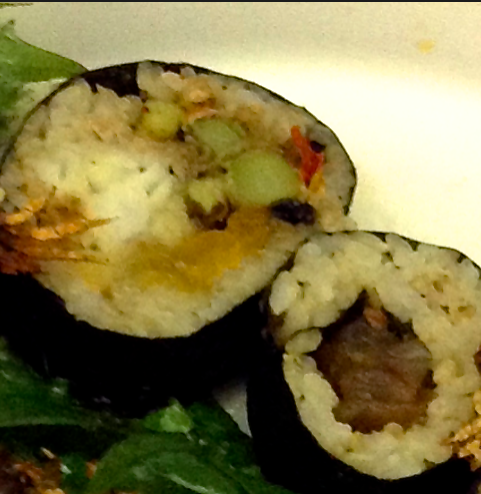 With guests eager and unafraid, the sushi practically flew off the trays. As the diners bit into the catfish rolled up with apricots, asparagus and black beans, they carefully examined each individual component of their meal and expanded their own definitions of food. The jellyfish, seasoned simply with garlic, roasted sesame oil, invasive dead man’s finger seaweed and chili peppers left the crowd realizing that their food choices are an important way to influence the environment. “I’m always outside thinking: Can I take you home and chew you up? Tonight we’re seeing that of course we can eat some of these things away,” said Richard Kagan a self-proclaimed environmentalist and retired professor of East Asian history at Hamline University in St. Paul, Minn., whose wife, Anna Wasescha, is the president of Middlesex Community College.

The next tray featured sushi filled with broccoli, artichoke and dandelion greens, a common weed from Europe displacing native flora throughout the country. Rather than bidding in a silent auction or making small talk, guests were snapping photos of their food and talking about what they were eating. “It’s pretty wild when your table is coming up with dressing ideas for the weeds in their backyards,” said organizer Rusowicz. Roman and Lai try hard to emphasize how easy it is for anyone to become an invasivore and positively impact the environment. “When [invasives are] this delicious, it’s not hard to be encouraged,” said Roman, commending chefs like Lai for his contribution to the movement.

Lai’s culinary innovation was not simply relegated to sushi for the evening. The chef took out a cooler full of lionfish — a ferocious Indo-Pacific native threatening the seas of the Western Atlantic and Caribbean — and cut the fish into small, thin slices for sashimi. Doused with a mixture of tamari, lemon juice, crushed peppers, roasted seaweed flakes and a combination of spices, it prompted diners to ask themselves: Why aren’t we doing this more? “The lionfish was easily one of my favorites — it was soft and tender and the marinade was surprising and lemony — just so yummy,” Kagan said. 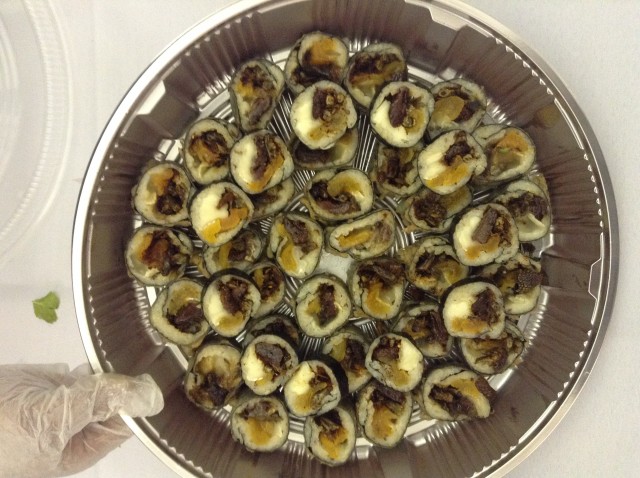 To Lai and Roman’s shock, the crowd seemed undeterred by the seemingly bizarre ingredients and combinations that filled (and then very quickly) disappeared from their plates. Lai is used to people being afraid of his food. He routinely watches potential customers walk out of his restaurant after one look at his menu. It wasn’t until the grand finale — cricket sushi with strawberries and brie cheese (while not technically invasive, crickets are wildly abundant and much more sustainable than alternatives) — that the diners expressed significant hesitation. “The cricket sushi seemed to be the dividing line between how die-hard you were,” said Rusowicz later that evening.

Yet as Lai circled to every table for final feedback and questions, he spotted an outstretched arm, reaching to claim the final piece of cricket sushi off the serving tray. The chef paused and addressed the room. “I want to commend you all on trying new things tonight,” he said. “We just ran out of crickets.”

…”Conservatives don’t want to here this but another rosaen why California stop getting so many folks from other states is prop 13 put a cap on school spending …and the UC system was no longer almost free”Nonsense. CA public schools are less attractive to whites from other states because they’re increasingly filled with dullards. Money is fungible. CA could easily continue to spend on its schools like it once did if it so chose. Prop 13 didn’t “put a cap on school spending”, it put a cap on the rate of increase in property tax assessments. Yes, I know that local property taxes were a big a driver of school spending. Adjust. It was 35 years ago yet the left still whines as if it was yesterday. How awful that people can’t be taxed out of their homes. Two, as a a long-time CA resident, I’m glad to see the UC (and CSU) system no longer “almost free”. Heaven forbid some “womyn’s studies” majors pay for their own “education”. The lunatics at Berkeley have no claim on my money. As for local schools – my kids left the public school system after the 2nd grade. Our historically 90% white elementary school in an upper-middle class Bay Area suburb became about 30% mexican – the mexican kids were nice enough but they were constantly behind and the school was devoting more and more resources to trying to catch them up. Their parents couldn’t be bothered to help of course, and also didn’t participate in any of the PTA activities, whether cleaning school grounds or having fund-raisers (to help fund teacher’s assistants to help catch up the mexican kids). Resources being a zero-sum game in the near-term, the higher achieving white and asian kids were increasingly left to work on their own. My kids’ had level of homework that would boggle your mind – until you realized the school was pushing their duties onto white parents so they could pay attention to the mexicans. So I’m glad one avenue out of many that CA uses to gouge money out of me has been choked off. BTW, this is the natural end game for ceaseless immigration: people no longer consider other CA or US residents their countrymen and are less willing to make sacrifices to help them.