No more needles for allergy sufferers?

Allergy treatment from Europe has finally hit the U.S. markets 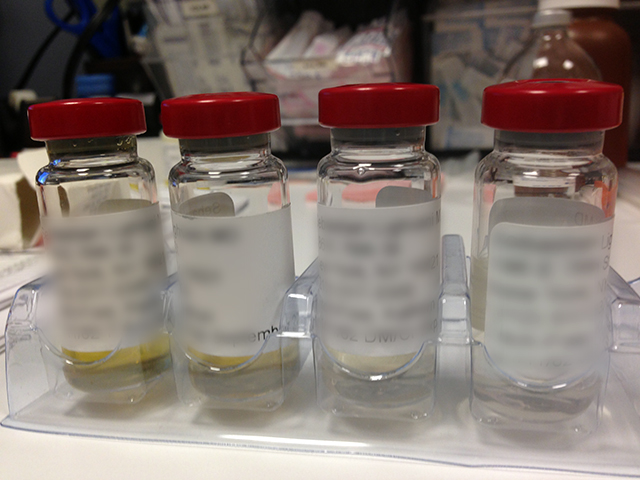 Will shots like these become extinct? Probably not, but it’s nice to dream. [Image credit: Kathryn Free]

According to my friends, I have the grossest allergies they’ve ever seen. As a teenager, my eyes would become so swollen and red that my chemistry teachers would ask if I was having problems at home. I used an entire box of Kleenex during an hour of 4th grade math class because my nose was an unstoppable spout of mucus.

I tried to distance myself from my sneezy reputation. When deciding between my two top college choices, I eventually picked the campus with the fewest trees.

But the 30 million American allergy sufferers like me now have some cause to celebrate. After years of lagging behind Europe, the FDA has approved three under-the-tongue allergy tablets, which hit the market this past spring. These sublingual therapies are safer and more convenient than standard shots. But will they work for everyone who sneezes at the slightest rise in pollen count?

Weekly shots have finally curbed my allergy symptoms. For three years, I’ve been injected with increasing doses of the things I react to – tree and grass pollen, dust mites and chicken extract, to name a few. This treatment is called subcutaneous immunotherapy, or hyposensitization. Think of it as a molecular version of the boy who cries wolf: as the doses grow, my immune system becomes less enthusiastic about dropping everything to attack a phantom assailant. No longer do I become a useless human being for two weeks every spring. I don’t need to shut the window on a lovely day or make tentative plans with friends in April, depending on my “DEFCON sneeze level.”

Even though it’s the only known way to suppress the immune system’s natural response, only 2 to 6 percent of American allergy sufferers get immunotherapy treatment. But being sneeze-free comes with a price: it’s inconvenient, expensive and painful. I pay $25 to my doctor’s office every week to get four needles jammed into my arms. My insurance company sends the allergist $67.67 for each visit. Around 70 percent of people who begin hyposensitization drop out because they can’t find time or money to visit the doctor each week.

“It really does require a bit of a time commitment coming to the office regularly,” says Dr. Linda Cox, a practicing allergist and the past president of the American Academy of Allergy, Asthma & Immunology (AAAAI). “Most people in their overscheduled lives can’t accommodate for that.” As an immunotherapy patient who receives shots in her own office, Cox admits that even she occasionally forgets her shots.

Enter sublingual therapy – instead of visiting the doctor for weekly injections, patients take a daily tablet of allergens at home. Patients hold the medicine under their tongues until it’s completely dissolved. Sublingual therapy reduces allergy symptoms by about 30 percent (compared to less than 10 percent for antihistamines), and the effects last for years after the treatment.

Immunotherapy isn’t the only treatment that uses the sublingual route: doctors prescribe under-the-tongue nitroglycerin for chest pain, antipsychotics for schizophrenia and sleeping pills for insomnia. Compared to pills that have to travel through the stomach, sublingual tablets get absorbed directly into the bloodstream, providing a faster drug delivery route.

Why do sublingual patients get to skip the doctor’s office? Because our tongues don’t react as violently to allergy extracts. Around 0.1 percent of allergy shots provoke a generalized reaction that affects the patient’s whole body. Though most of these reactions are mild, some can be deadly. Between 1985 and 1993, 35 people died from allergy shots. This adds up to being a less than one in a million chance, but it’s still high for a voluntary therapy. There have been no cases of death from sublingual immunotherapy to date.

As far as safety is concerned, sublingual therapy is better because it mainly has local side effects, says Giorgio Canonica, an Italian researcher at the University of Genoa who has published extensively on sublingual immunotherapy. What do most patients feel after taking their first tablet? “Tingly itchiness. My mouth feels funny. A good percentage, up to 70-some percent, complain of that with the sublingual,” says AAAAI’s Cox. However, she says most of that occurs in the first couple days to the first few weeks and then goes away without doing anything. Compared to being covered in hives and constricted breathing, two things I’ve experienced with injections, an itchy tongue doesn’t sound so bad.

European studies have found that it’s more cost-effective than shots or antihistamines. But their range has been limited: the only available tablets have been in Europe, and they only treat grass pollen allergies. However, the pharmaceutical company Merck just released Ragwitek, a ragweed tablet, and Grastek, a grass therapy, this past April in the U.S., and pharmaceutical company Stallergenes has just added grass tablet Oralair to the market as well. European and U.S. manufacturers are currently in the middle of clinical trials to study dust mite and birch pollen therapies.

Sandra Lin, a clinical researcher at Johns Hopkins, believes sublingual immunotherapy is a direction we’re heading in, but thinks it’ll be a slow process. However, she says that there has been a gradual uptick in the number of doctors offering injection serum as a sublingual substitute. She’s been providing her patients with sublingual drops of their shot formulas since 2008.

I asked my doctor if I could give sublingual therapy a try, but unfortunately, it isn’t ideal for patients who have a wide range of allergies. If I’m just taking the grass tablet, only my grass allergies will subside. For someone who is allergic to trees, grasses, molds, cats and dust, it’ll be a long time before every allergy group has an approved sublingual tablet. For now, I’ll still be trudging the 10 blocks (and rolling up my sleeves) for a stick in the arm.

Our conclusions have been: “Findings show a small benefit of the grass pollen sublingual tablets in reducing symptoms and in decreasing the use of symptomatic medication (antihistamines and corticosteroids) in patients with SARC. Considering the low magnitude of the benefit, the convenience and easy administration do not seem to be sufficient reasons for the choice of SLIT.”

Funny reading Dr. Lorenzo response. Doctors in the pharma companies don’t want these treatments to work in the us. There is too much money in it for them. They will keep preventing the treatments from coming to the USA so they can keep their pockets lined. Very sad for the USA medical consumer. We hare having medical treatments choked off from us by doctors and the FDA.