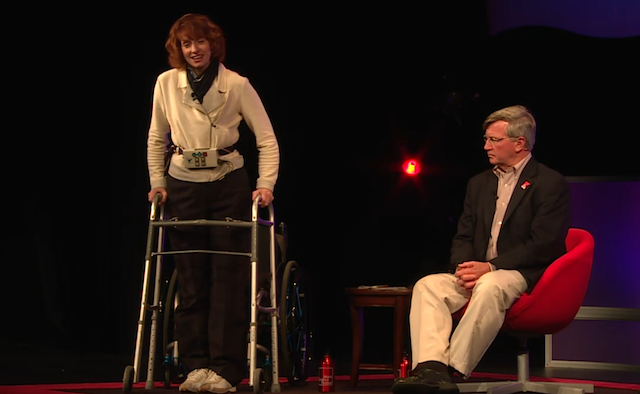 On a moonlit evening 16 years ago, Jennifer French and her friends went snowboarding. “Everybody made it down to the bottom of the mountain except for me,” French told a sold-out audience at the World Science Festival’s Better, Stronger, Faster event in New York City last Saturday. French hit a patch of ice and cascaded down a 40-foot embankment, injuring her spinal cord and paralyzing her from the chest down.

But technology has changed that. An electrical implant in French’s body has restored some function to her legs and allows her to perform the everyday functions that we usually never think about: folding laundry, talking to someone at eye level and even walking down the aisle at her own wedding.

French’s ability to walk comes from a technology that simulates the brain’s instructions to muscles. Right now the instructions come from an external device that French wears, but researchers are working on a way to implant brain devices that send instructions from the mind to the muscles. Technology like this has the potential to help paralyzed people walk again and prevent the secondary health problems that often accompany paralysis like kidney damage, osteoporosis and pressure sores that lead to infection.

Our body’s muscles respond to electrical impulses sent by the brain and spinal cord, and when the circuit is cut short, the signals can’t reach the muscles. But technology called functional electrical stimulation delivers simulated electrical signals to muscles and nerves, via a series of electrodes that are implanted in muscle tissue or next to nerves. The electrodes connect to a receiver in the abdomen that picks up radio signals from a wearable device and passes the instructions to the electrodes. Each external device is uniquely programmed to deliver instructions for specific movements: French can press a button on the device to switch to a program for leg lifts, standing and long airplane rides, among others. “I even have a pattern in here for a back massage, which is fantastic,” said French.

So what’s next for the technology? Getting the instructions straight from the brain and not an external device. Researchers like John P. Donoghue and P. Hunter Peckham are collaborating to combine functional electrical stimulation with a brain implant. About the size of a baby aspirin, the implant picks up signals from a part of the brain that controls limb movement. Patients have already used the brain implant to control a robotic arm, so why not a human arm or leg?

“Think about it. Suddenly you can have normal movement back,” said French. “We always think of the movement that we had before our injury. And we want to be able to restore that.”