Old drilling rigs in the Gulf of Mexico house a surprising bounty, if we can figure out how to preserve them safely. 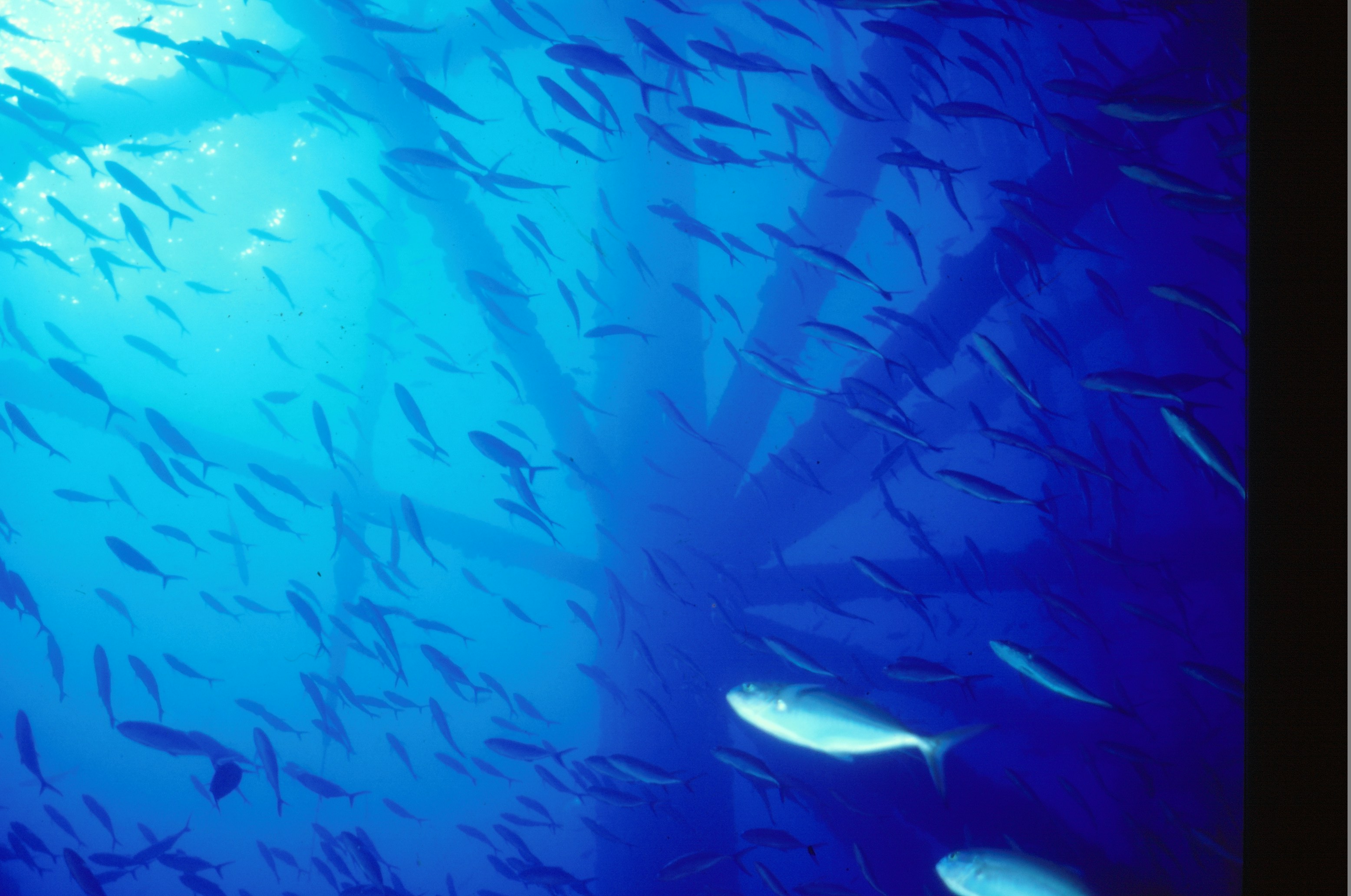 The once-barren metallic scaffolding teems with life under the surface of the Gulf of Mexico. Image courtesy of Dr. Quenton Dokken, Gulf of Mexico Foundation, Inc.

Hundreds of miles off the coast of Louisiana in the Gulf of Mexico, an oil rig creaks and sways. It’s been fixed in place for decades and is reaching the end of its working lifespan. Rising 20 stories above the ocean surface, its windswept surfaces are barren and desolate. But underwater, the landscape couldn’t be more different: parrotfish are flitting between corals flushed in vibrant pinks and yellows. It isn’t a natural reef — the corals have attached to the metal poles, resembling scaffolding covered in mossy shag carpet — but it is clearly a thriving one.

Fishermen know it. Their boats flock to the rigs, lured by the tuna, snapper and other increasingly scarce species that congregate in the crooks of the scaffolding. Dive boats come, too; scuba divers can marvel at the colorful wonders while researchers can chart the renaissance of endangered corals.

But like all utopias, these are fleeting. As the rigs age, they become liabilities for the oil companies that put them there. Hunks of metal fall off, endangering passing boats or even other structures during intense weather. That’s why federal and state governments typically require that the rigs be removed. But there’s a loophole: If a federal agency approves, and the owner is willing to pay for the necessary transformation, the partially dismantled rig can be left underwater to serve as an artificial reef. Since 2002, over 300 rigs have been converted to reefs instead of removed from the water and scrapped, but with more than 4,000 rigs in the Gulf of Mexico alone, many fishermen, environmentalists and even oil industry leaders think the number should be higher. These groups have started thinking creatively about how to keep more reefs in the water, but no one can agree on how to streamline the approval process for turning rigs into reefs.

“When we put in these platforms, nobody knew anything would grow and be an asset. But that’s where we are now,” says Paul Sammarco, an ecologist at the Louisiana Universities Marine Consortium in Chauvin. While almost everyone involved wants to see more rigs turned into reefs, there’s no consensus on how to best do the conversions, or who would be liable if an artificial reef caused an accident. Decommissioning is expensive, costing anywhere between $1 million and $10 million per rig, depending on the water depth and weight of the rig.  Among other steps, rig owners must sever the metallic tethers from the sea floor, cement up the well, and pick up any debris in the surrounding area — all steps required since the 1970s when Congress passed its so-called Idle Iron policy. The cost of turning a rig into a reef is only slightly less than pulling the rig out of the water and scrapping it, but oil companies would rather leave the rigs where they stand and save money.

No one anticipated that old rigs would be such successful reefs because nothing even remotely like the hard scaffolding of a rig exists naturally in the Gulf of Mexico. Left to the whims of nature, the Gulf is largely a soft-sediment ecosystem. Soil from the Mississippi and Atchafalaya Rivers settles to the sea floor, creating a sandy habitat for small, floating organisms like nematodes and diatoms.  But with a metal surface in the water column, the ecosystem changes drastically. Corals and small invertebrates are the first to colonize and build upon the hard substrate, laying the groundwork for small fish to arrive. These brightly colored fish, such as triggerfish and damselfish, float to the new reefs as larvae and spend generations there. They eventually entice schools of large grazers like snappers and groupers. The overall biomass, or weight of all organisms, doesn’t change — the ecosystem is just different, and made of species that humans consider more desirable. Plus, much of the sea floor is untouched by the rigs, “so the species that were there before are not exterminated,” explains Bob Shipp, a marine ecologist at the University of South Alabama in Mobile who studies artificial reefs. Overall, then, the rigs actually increase biodiversity because of the habitat they add, he said.

The rigs shelter not only corals and reef fish that are relatively sedentary, but also open-water, commercially important species that have long been overfished, such as red drum, some types of sharks and yellowfin tuna, who are drawn to the reefs to feed and breed. Red snapper is the best example. Due to overfishing, their population in the Gulf hit an all-time low around 1990. But once federal fisheries regulators set an annual quota for all fishermen in the Gulf, snapper populations finally had time to rebuild to their current level. The reefs have sped up this recovery process, says Sammarco, the Louisiana ecologist.

Not all rigs can be turned into reefs — only about 10 to 25 percent are feasible candidates, according to Sammarco. The others may be too close or too far from the coast, too new or too heavily eroded, or they may be in the Dead Zone, an area where nutrients from the Mississippi River flow into the Gulf and prevent life from thriving. Decommissioned rigs that are not turned into reefs are usually removed and brought to shore, though some parts are sometimes reused on other rigs.

Even the small percentage of rigs destined to become reefs must first undergo a drastic transformation. One common method uses explosives to separate the top of the rig about 85 feet below the surface, and then places the severed top section nearby on the ocean floor. The blasting damages the surrounding ecosystem, but it usually recovers within a few years. All of this is surprisingly expensive, says Steve Kolian, an environmental specialist at the consultant firm Gulf South Research Corporation. In 100 feet of water, he said, a conversion can cost up to $10 million — or even higher if the rig is in deeper water, or if many rigs are being removed at the same time and services are stretched thin.

Liability is the primary concern, both during and after the decommissioning process. While the cheapest option would be to simply abandon the rigs untouched, the structures near and above the surface pose a hazard. “If a boat hit [the rig], or should someone be diving and be hurt, the oil companies are responsible,” says Sammarco. Once a platform has been decommissioned, however, rig operators are no longer liable — whether it’s been converted into a reef or back into scrap metal, according to T. J. Broussard, the chief of the Environmental Enforcement Branch for the federal oversight agency, the Bureau of Safety and Environmental Enforcement (BSEE).

Rig operators and the BSSE got a wake-up call in 2010, when a particularly violent hurricane season compromised some run-down structures still in the water. “During times of severe weather such as hurricanes, which can be common in the Gulf of Mexico, structures associated with oil and gas production can be toppled, severely damaged or destroyed,” Broussard says, potentially causing leaks or accidents. So, in September 2010, BSEE issued a notice to all of the rig operators in the Gulf reminding them that their leases all included a deadline date by which the rig needed to be decommissioned, and that many companies had fallen behind on taking the necessary steps. “Hurricane damaged structures are 10-20 times more costly to decommission and pose a significant risk increase to safety,” Broussard notes, so it makes sense to take action before more damage occurs.

Since then, the number of conversions has increased, but environmentalists and oil companies are pushing BSEE to accelerate its process for approving reef conversion proposals. The process currently takes about a year, but it should really only take 90 days, argues Quenton Dokken, president of the Gulf of Mexico Foundation, a conservation group. BSEE counters that a deliberate process is needed to safeguard humans and wildlife and to reduce the risk of liability, but some independent observers, such as Alabama’s Shipp, think there’s room for improvement. Some oil companies have even proposed a moratorium on rig removal in the Gulf, allowing the companies to save millions of dollars but raising the risk that unconverted rigs would be risks for ships and divers. Still other experts, such as Kolian, the industry consultant, think that the decommissioned rigs could be repurposed as sites for offshore wind turbines and solar panels.

The failure of the various groups — industry officials, conservationists, fishermen, citizens and government regulators — to come together on a consensus rigs-to-reefs plan frustrates Dokken, of the Gulf of Mexico Foundation. “It’s not happening to the extent that it should,” Dokken says. “I find that mind-boggling.” He says he feels an obligation to leave a gulf that’s thriving ecologically for future generations. “We’re addressing an issue that isn’t going to affect you or me very much, but our children and our grandchildren, it’ll have a huge effect on them,” Dokken says.