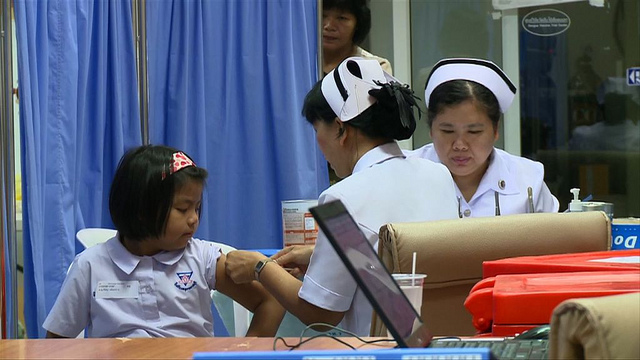 A young girl in Thailand receives a vaccine for dengue fever as part of a Sanofi Pasteur clinical trial. The company is expected to apply for vaccine approval next year. [Image credit: Flickr user Sanofi Pasteur]

For the more than 2.5 billion people at risk of getting dengue fever, a vaccine could be available as early as next year — but the latest results show it isn’t overwhelmingly effective.

The French pharmaceutical company Sanofi Pasteur recently completed two phase III clinical trials of its vaccine and presented the data at the American Society for Tropical Medicine and Hygiene Meeting at the beginning of November. The first trial, of 20,000 people in Central and South America, found the vaccine to have a 60 percent effectiveness rate in protecting against the four types of the virus. The second trial, in Asia, had an overall efficacy of 56 percent and included 10,000 people.

As many as 100 million people are infected with dengue every year, according to the World Health Organization. The Aedes aegyptii mosquito tends to strike in cities during the day, and is a different species from the one carrying malaria. Symptoms usually last two to seven days, and include fever, headache, muscle and joint discomfort, nausea, vomiting and pain behind the eyes. The best treatment is replacing lost fluids intravenously. If patients lose too many fluids, they can transition into severe dengue; symptoms include bleeding from the gums, significant vomiting, severe stomach pain, and sometimes death. About 22,000 people die from dengue every year, according to the Centers for Disease Control and Prevention.

If bitten by an A. aegyptiis mosquito, humans can catch one of four flavors of dengue fever, called serotypes. The Sanofi vaccine fared better against the first, third and fourth serotypes of dengue, but its 42 and 35 percent efficacy against the second brought down its overall batting average. The company is likely to apply to release the vaccine next year, but it will have to improve its success rate before distributing it around the globe. While a roughly 60 percent efficacy could significantly reduce the number of cases in endemic countries like India, said researcher Annelies Wilder-Smith in an October Lancet article, a vaccine of this effectiveness wouldn’t be worth it for travelers or for countries, such as the United States, with few cases.

Several other pharmaceutical companies as well as the National Institutes of Health have vaccines in the pipeline, but none are as far along as Sanofi’s. The company has spent $1.6 billion on its development, according to the Financial Times. Sanofi’s version is a live, attenuated vaccine with what’s called a yellow fever backbone. It consists of a weakened yellow fever virus with dengue virus proteins on its surface. Because the backbone virus is weak, the body’s immune system is able to recognize the intruder and produce the defenses necessary to prepare for an actual dengue attack in the future, without catching the disease. Two of the other competing vaccines are also live and attenuated, while two more include only partial dengue virus proteins, and another uses the entire inactivated dengue virus. All are worthy candidates, but have to prove their validity in rounds of clinical trials first.

Since the immune system’s response to dengue virus isn’t well understood, the reasons why Sanofi’s vaccine isn’t working as well as planned are unknown. Sanofi’s results are “encouraging,” but the merely moderate effectiveness is a concern, according to Joachim Hombach, a senior adviser on vaccines at the World Health Organization. “The fact that we see a vaccine approaching the finish line does not mean that one can disinvest from this more basic science,” Hombach told Nature Reviews Drug Discovery. The company is now focusing its effort on determining how to improve the vaccine’s efficacy before applying for approval sometime next year.