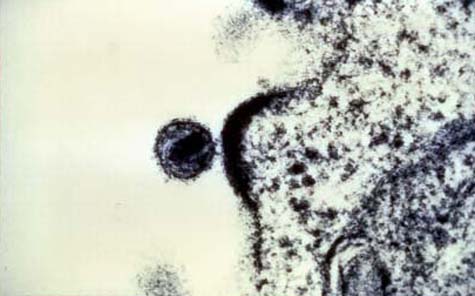 HIV budding out of a T-cell [Credit: Dr. Tom Folks/NIH]

In the spring of 1984, scientists announced they had isolated the virus that causes AIDS and anticipated a cure for the disease within two years.

Now almost a quarter century later, a cure is still nowhere in sight. AIDS has since become arguably the worst epidemic in modern times, currently with an estimated 33 million people infected worldwide.

Powerful drugs let people live for decades with the virus, but HIV shows little sign of abating its deadly march across the globe. In 2007, about 2.5 million people became infected with HIV and about the same number died from AIDS, the end-stage of the disease caused by the virus. With a number of failed vaccine efforts in our wake, some scientists fear that a vaccine or a cure might not be possible.

Nonetheless, many still think we have a shot at preventing new infections or stopping the virus from killing those already infected. To uncover innovative ways to combat HIV, researchers are now seeking a deeper understanding of how the virus outsmarts our immune systems and why previous vaccine attempts have failed.

Here’s some of what we do know about the virus, which at present is nothing short of a death sentence for those who contract it. HIV targets two kinds of cells in our immune system called T cells. So-called helper T cells coordinate the activities of the immune system, much like the general of an army, while soldier-like killer T cells destroy bodily invaders.

By zeroing in on T cells, HIV knocks out the body’s first-line of defense. HIV’s initial attack is so intense that the virus can replicate millions of times within cells in the first month of infection.

Some T cells die after being invaded by HIV, while others harbor the virus and enter a dormant state, where the virus can reactivate many years after the initial infection. This ability to infiltrate immune cells and live undetected in us for years makes the virus particularly tricky to find and fully eradicate.

In theory, an HIV vaccine would prime the immune system by building natural defenses called antibodies to fight the virus even before infection. That’s what vaccines, such as the one for influenza, are designed to do. As flu season nears, people are exposed to a dead flu virus strain. T cells recognize this foreign substance and direct B cells, a type of white blood cell, to make virus-fighting antibodies. This way, if the flu virus does enter the body, the immune system is ready to go to war.

This customary approach to vaccination, however, has so far failed with HIV. A highly publicized Merck trial in 2007 attempted to bulk up patients’ immune systems by giving them a vaccine that closely resembled the virus.

But when this vaccine appeared to actually increase the rate of HIV infection in participants, the trial was ended abruptly. Merck researchers still aren’t entirely certain why this vaccine failed, but the trial did reveal that strengthening the immune system alone is not enough to stop the virus’ rampage.

This setback shocked the HIV community. David Baltimore, head of the National Institute of Health’s HIV vaccine effort, has said that the prospect of an HIV vaccine remains dismal despite intense research. “We’re no closer to a vaccine than we were in the early 1980s,” Baltimore said at February’s American Association for the Advancement of Science conference.

Researchers who hold out hope for a vaccine acknowledge that thwarting this virus will take time, patience and ingenuity. “Just because some things don’t happen naturally does not mean science can’t do them,” says Peter Kwong, an HIV vaccine researcher at the National Institute for Allergy and Infectious Diseases.

Timothy Cardozo, an assistant professor in the department of pharmacology at New York University Medical Center, also says it is too early to give up. Cardozo’s research, funded by the Bill and Melinda Gates Foundation global vaccine initiative, focuses on how the virus attaches to and infects our healthy T cells.

“Somewhere on the surface of HIV there must be something in common amongst all the strains because they all infect the same cell,” says Cardozo. “The virus does a great job of hiding [this common feature], but it’s got to be there. That’s what we are looking for.”

Using state-of-the-art computer technology, Cardozo can scour the microscopic surface of HIV with more precision and clarity than ever before. He is continuing the hunt for a chink in HIV’s armor to build the vaccine that may one day bring the virus under control.

hi i m momo i think hiv have a difficult structure n cant have much resistance of immune systenm t cure that hiv disease or infection and hiv is a preety diabolical virus it mainly infects cells of immune system,specificaly t helper cells.fortunely these helper cells that tell the rest of immune system about viral infections.if we kill the messenger,the alaram can never b raised in the conclusion aganist hiv there is no vaccines developed

The enzyme Deoxyribo-nuclease that destroys any type of DNA of any type of organism!
Why It is not use in the destruction of virus’s DNA.

hiv must have vaccine in few year to come, but it must being killed many of us die to ARV!

HIV might have vaccine in few time coming, but it must being killed many of us because of ARV