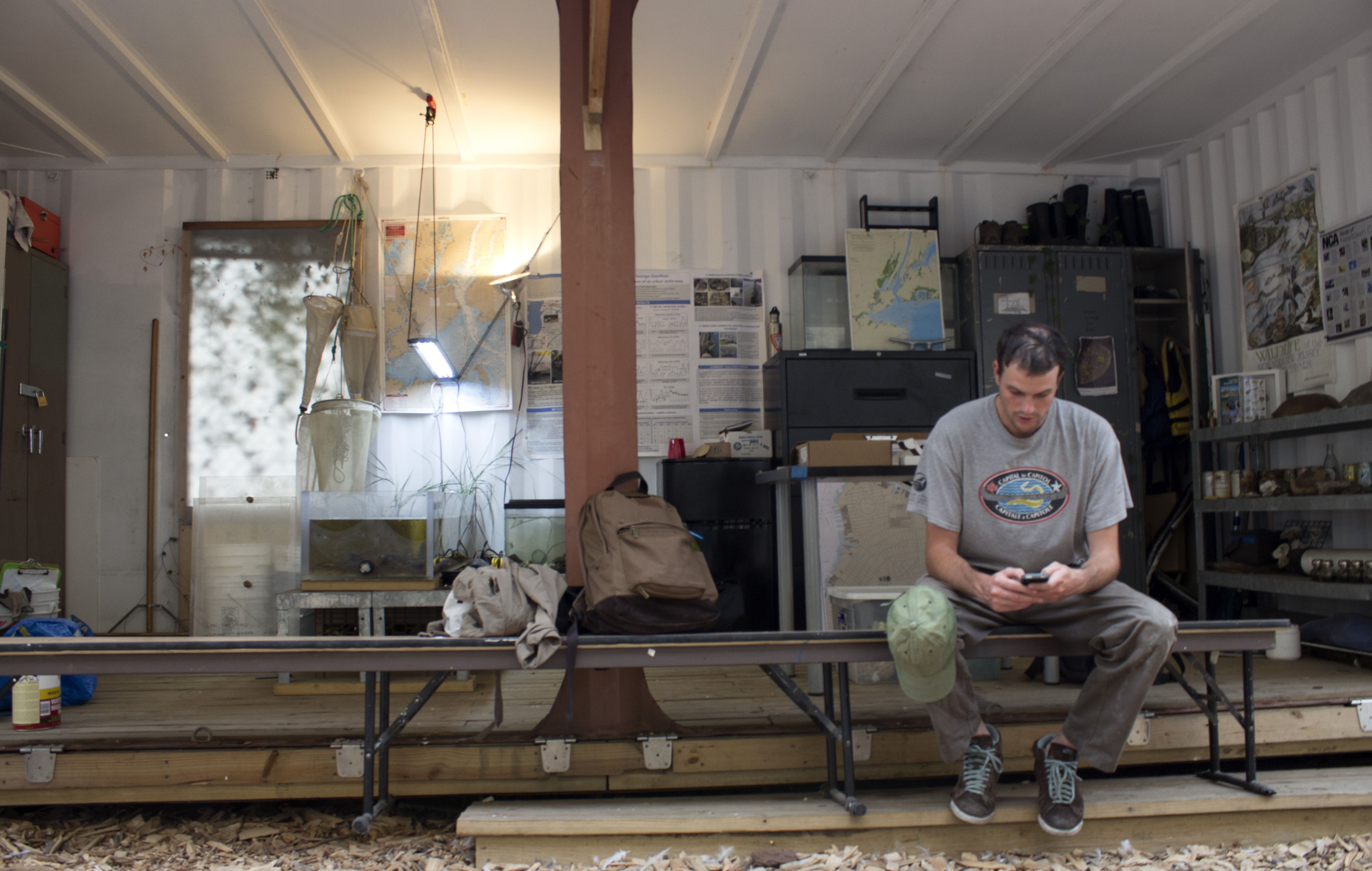 In a shed at the North Brooklyn Boat Club, Willis Elkins hovers over an aquarium filled with what appears to be brown sludge and water. Then something moves. A hermit crab scampers over a mussel, a tiny fish darts across the water and a shrimp propels itself forward. Elkins pulls a bottle of deep green goop from a refrigerator beside him. Before he bought this Shellfish Diet, a mixture of four marine microalgae, the mussels were dying.

These animals are just a few of the specimens that Elkins, program manager for the Newtown Creek Alliance, recovered from Newtown Creek, an industrial waterway that runs between North Brooklyn and Queens. More than half a century ago ExxonMobil spilled between 17 million and 33 million gallons of oil into the water. In 2010, the U.S. Environmental Protection Agency granted Newtown Creek superfund status and initiated a multi-phase cleanup to assess the damage and restore the creek — maybe not to the marsh it once was, but to something livable and safe.

Efforts to clean up the creek today aren’t just about sopping up an old mess. They’re about people working together to “nice the place up,” said Mitch Waxman, a photographer, writer, historian and nature-walk guide.

In May 2014 an incident at Dutch Kills, a Long Island City tributary, illuminated what “nicing it up” truly means. Elkins and other creek paddlers called the EPA’s spill hotline after spotting a rainbow-colored sheen on the water near the boat club. Four months later, a second tip encouraged the EPA and the New York Department of Environmental Conservation to investigate. 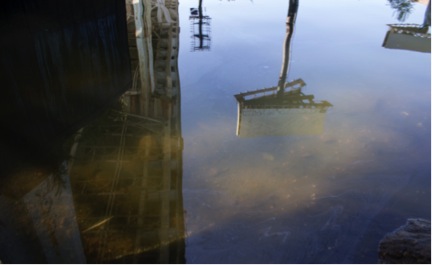 Someone had allegedly dumped 2,000 to 3,000 gallons of oil down a drain. It’s “indicative of how the creek has been treated in recent years and how some people might view waterways like Newtown creek not as a community resource but as a polluted area,” Elkins said.

The investigation has been active since September. If proven guilty, the perpetrator faces up to six figure fines. Randall Austin, the spill response investigator for the DEC, said the community was a critical tool for launching the investigation. “They are the eyes and ears out there,” he said.

But groups like the North Brooklyn Boat Club aren’t just made up of river-loving vigilantes. The boat club brings together neighbors who would normally avoid the polluted waterway, inviting them down to paddle and learn about the environment in their own backyards. They train members to be river guides and teach students practical science lessons. 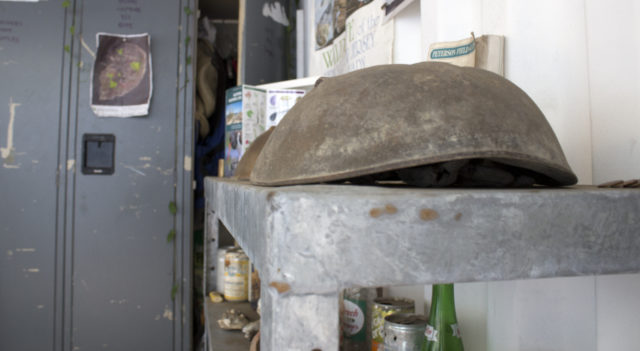 Back at the boat club the educational shed resembles a hoarder’s lean-to filled with equipment and various remnants from the creek: the shell of a horseshoe crab, bottles and cans.

But a closer look reveals a whiteboard with weekly measurements of bacterial pollutants, such as E. coli, that enter the water from combined sewage overflow sites after heavy rainfall. These pollutants are such a threat that the boat club regularly cancels paddles during poor weather.

The aquarium, bubbling in front of the whiteboard, simulates the creek floor, combining water from the East River, marine life from off the dock and sediment and plants from elsewhere. Elkins uses the aquarium to teach local students about marine life in the creek. He has recently been showing students how to collect plankton to feed the animals.

Elkins just learned how to do a plankton tow himself. He grabs two cone-shaped nets, plastic bottles and beakers and goes down to the dock to collect plankton. He dunks a net, bottle attached, into the water and walks up and down the dock. The net glides beside him. He pulls it out, pours the water into a beaker and watches tiny white organisms jump as the water settles. He dumps plankton into the aquarium and the animals feast. 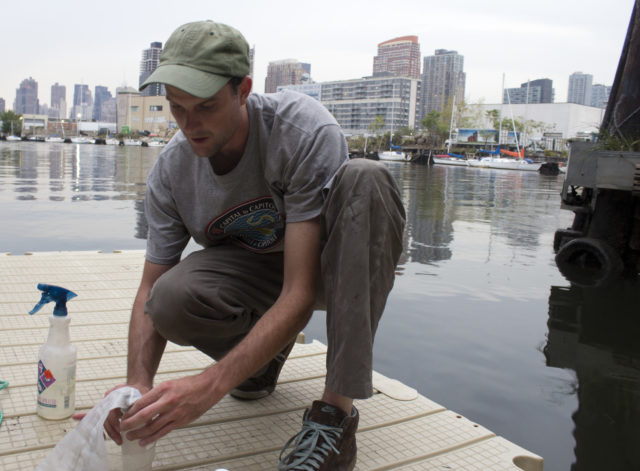 Elkins has been working on another project with Sarah Durand, an associate professor of natural science at LaGuardia Community College. With the Constructed Wetland Frame Project, she wants to reintroduce plants — like the marshy grass called spartina alterniflora — into the water. This plant is important because it filters the water and makes homes for mussels that ultimately attract other animals to the environment.

With no banks for planting, however, the project is tricky. Durand, along with project manager Carter Craft, worked with an engineer to design boxes that would hold the grass and hang from the different locations on the cement bulkheads that surround the creek. With changing tides that alter how much water the plants get, Durand and her students carefully monitor plant health to figure out what height makes optimal use of the tides. Durand is working on designing new frames that will not only accommodate plants but mussels as well.

The North Brooklyn Boat Club and Durand’s Constructed Wetland Frame Project are only a sample of the strong community environmental action in the neighborhood. In November 2014, 525 people cast their votes for how to divvy up an $11 million grant from the Greenpoint Community Environmental Fund. They decided to put the money toward environmental education, litter removal, planting trees and dealing with storm water.

But this is only a small number in comparison to the total amount given to the site. In the past few years, money has come from a variety of sources including a $7 million lawsuit involving the nearby wastewater treatment plant, a $1.2 million research and development grant and a $16 million pay out from Getty Petroleum Marketing Inc. to make up for its damage on the creek. In all, a total of $35 million is going to environmental renewal in the area so far.

“Others are starting to realize it’s not just a dirty, abandoned waterway good for illegal actions,” said Elkins. “People are there, seeing what’s going on.” 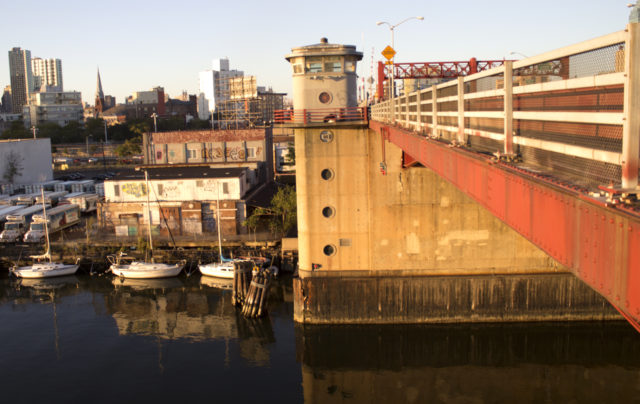