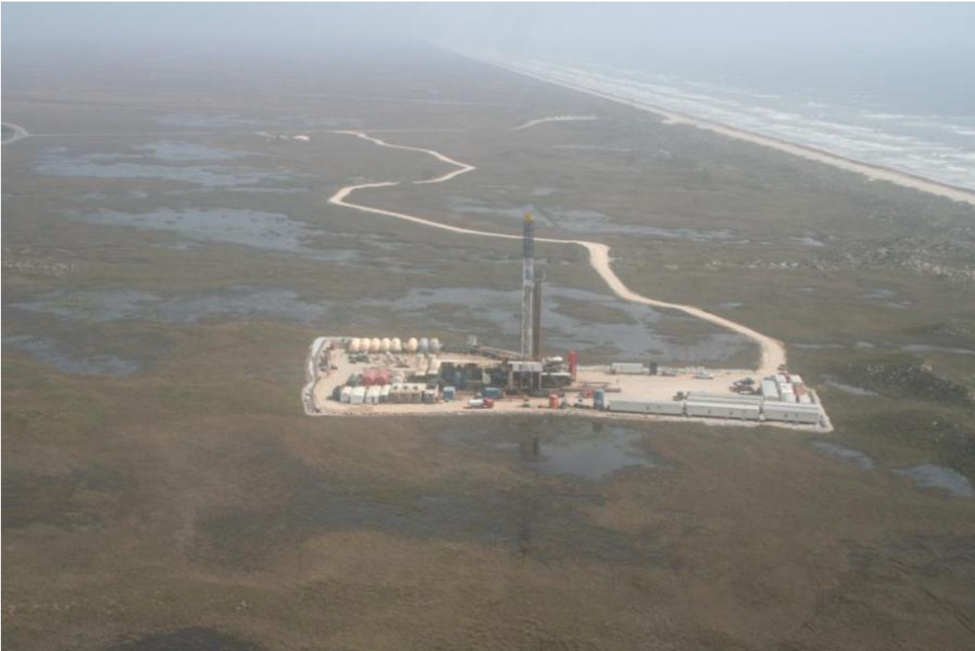 For now, 12 federally protected parks have oil or gas wells, including this operation on Padre Island National Seashore in Texas, but the number could increase. [Image Credit: National Park Service]

A stark expanse of rocky hills and scrubby badlands, Theodore Roosevelt National Park was created almost 70 years ago to protect its namesake’s favorite North Dakota hunting haunt and vacation hideaway. But today, the glare from gas flares obscures the park’s once brilliant starry nights and there’s smoke on the horizon beyond the herds of buffalo munching prairie grass.

The flares and smoke come from oil and gas wells that sit right next to the park, and one day, drilling may be allowed inside the park itself. To many Americans, that may sound absurd or illegal: How could there be oil or gas wells in a national park? But 12 federally protected parks already have wells inside their borders because of a legal quirk, where some landowners retained drilling rights when they sold their property to the National Park Service decades ago.

That worries the mayor of Medora, North Dakota, a small town whose economy relies on the more than 500,000 annual visitors to Theodore Roosevelt National Park next door. “Oil development in the national park would negatively impact visitation,” said Mayor Doug Ellison. “That would not be good for Medora.”

Now, the Park Service is tightening their rules for split estates where landowners only sold the surface rights, and not the valuable mineral rights to the oil and gas below the ground, to the federal government.

In a few months, the Park Service is set to finalize the first update since 1979 to the so-called 9B regulations that govern oil and gas drilling in parks. The old rules, which regulated access and cleanup of the wells, covered only about 40 percent of oil and gas operations on the 409 properties maintained by the National Park Service, but the new regulations will cover all wells within park boundaries. There will also be a new fee for building roads to access oil and gas wells, and well operators, who were previously only responsible for the first $200,000 of the cleanup cost, will now have to pay the full price to clean up any defunct wells. In all, the new rules will cost operators an average of $2,000 to update each well and up to $1,000 per well annually in operating cost, according to a Park Service analysis.

The Park Service expects to issue the final rules this spring or summer, said Ed Kassman, a project manager at the agency who has been working on the revisions.

Frank Buono, a Park Service retiree who now tracks wilderness issues, says well operators were exploiting loopholes in the regulations as early as the mid-1980s. For example, operators didn’t need to follow the 9B rules if they could access their wells without crossing parkland or if the wells existed before 1979, when the original rules took effect.

They’ve been trying to revise the 9B regulations since the 1980s, said Buono. “This proposal is long overdue.”

Today, park superintendents are still grappling with the tricky issues raised by split estates. For example, while the government owns the mineral rights underneath Delaware Water Gap National Recreation Area in New Jersey and Pennsylvania, oil drilling still threatens the park because just fifty miles upstream is another federally protected area, the Upper Delaware Scenic and Recreational River, where the mineral rights are privately owned. The river sits on the petroleum-rich Marcellus formation, so if the rights owners drilled there, they would risk both protected areas if oil were to leak out of the wells into the river.

“Anything that happens to them happens to us 12 hours later,” said John Donahue, superintendent of the Delaware Water Gap.

The new rules are a disappointment to some environmentalists, who would rather the Park Service buy up the mineral rights and ban drilling on park land outright.

“The National Park Service never contemplates analyzing the buying of mineral rights,” said Brandt Mannchen, a representative from the Sierra Club. “They think it’s too expensive, but they’ve never even tried to figure out what the rights would cost.”

Mannchen was a driving force behind a 2005 lawsuit in which the Sierra Club sued the Park Service for not applying the 9B regulations strictly enough in Big Thicket National Preserve in Texas. Well operators were drilling horizontally under the park from outside its borders, and since the wells weren’t technically inside the park, the Park Service only issued a set of non-mandatory suggestions on how to prevent pollution. The court ultimately ruled that the Park Service would have to re-review the project, but Mannchen said he did not notice any real changes that came out of the case.

The updated regulations will still allow the Park Service to grant exemptions like it did at Big Thicket, which means there’s still a threat to parks like Theodore Roosevelt and the Upper Delaware, where oil and gas are easily accessible from outside the park boundaries, according to Mannchen.

Other conservationists echoed Mannchen’s concern. The Center for Biological Diversity, an environmental advocacy group, issued a comment gathering more than 3,200 letters from supporters who felt the rules were not strict enough.

The oil industry has mostly stayed out of the issue. Most oil and gas producers aren’t affected by the regulations or aren’t looking to operate in national parks, according to Neal Kirby, a spokesman for the Independent Petroleum Association of America, which lobbies for oil and gas producers. Ultimately, the IPAA issued a joint comment with another lobby group, the American Petroleum Institute, stating that the existing 9B regulations did not need updating. However, they did not speak against the need for regulations.

The state governments of Utah and Alaska also issued comments opposing the regulations. State legislators felt that the updated regulations stifle local interests or conflict with rules passed by other agencies, such as the Bureau of Land Management.

The strongest opposition to the regulations has mainly come from libertarian groups that feel the government shouldn’t regulate most land uses. If conservation groups want to prevent landowners from exercising their drilling rights, they should purchase those rights, said Reed Watson, executive director of the Property and Environment Research Center, a nonprofit that advocates for free-market environmentalism. The groups could then lease the rights back to oil companies and use the profits to protect higher-priority areas in other parks.

“PERC is not pro-oil and gas,” said Watson. “But we’re trying to figure out ways to have oil and gas so that environmentalists can benefit elsewhere.”

Since most conservationists want to prevent drilling in all national parks, few are enthusiastic about Watson’s ideas, but they acknowledge that mineral rights owners have the legal right to access their oil. “Folks are disappointed that drilling in parks is allowed,” said Nicholas Lund, a senior manager at the National Parks Conservation Association who works on oil and gas-related issues. “But the private rights have a constitutional backing in the Fifth Amendment. The Park Service is doing whatever it can.”

Back in Medora, North Dakota, Mayor Ellison is watching to see how the new rules will be enforced in parks like Theodore Roosevelt.  “I just hope the oil development will not happen in our national park,” he said.