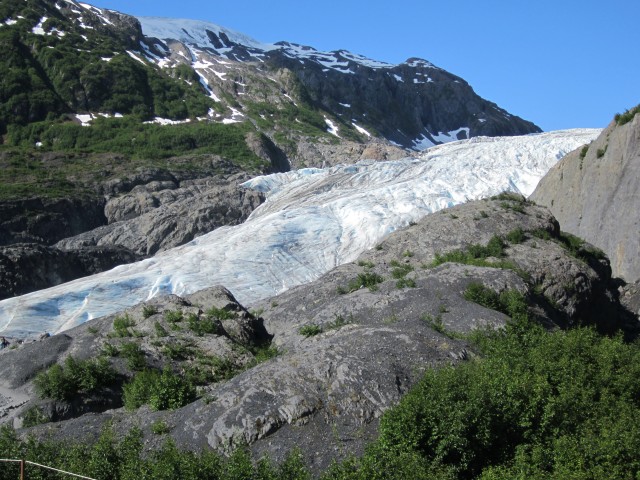 Here in Alaska, the National Park Service has taken the first steps to plan for a changing climate where the consequences – like melting glaciers, migrating wildlife and thawing permafrost — are showing up earlier and proving more dramatic than those predicted for lower latitudes. With that in mind, Alaska’s regional park service became the first in the country to begin the daunting process of planning for effects that no one can predict with exact certainty, but which will undoubtedly shape the future of all public parklands.

“Our feeling is, both according to the models and empirically in what we observe, climate change is moving faster in Alaska than it is in other areas, and consequently, we really need to be thinking about how that’s going to affect the decisions we make,” said Robert Winfree, Alaska’s regional science advisor for the National Park Service. In the past fifty years, Alaska has warmed twice as fast as the rest of the country and is expected to warm by another 3.5 to 7 degrees by 2050. This could mean, for example, less food for caribou but more spruce beetles, which bore into and kill trees.

But the point isn’t the effects, really – it’s that even though change will happen, the extent and nature of this change remains uncertain and the National Park Service must plan in the absence of knowing what exactly it’s planning for. The Department of the Interior issued a secretarial order back in 2001 directing all offices and bureaus, including the national park service, to consider the effects of climate change in planning and management and left it to each state to work out the details.

This new responsibility requires many park employees to re-envision their purpose as protector and preserver of that which exists. “We have this idea that the park should look like it did 200 years ago when settlers first saw it and it came into the consciousness of the American government. Climate change is throwing a wrench into that,” said Kassie Ernst, a geographer at University of Tennessee, Knoxville who has researched the subject. “You’re going to have to think about that piece of land under a different climate, and that will change it.”

It was perfect timing when, in 2010, Winfree and a colleague submitted a funding proposal to the National Park Service for the Alaska region to embark on scenario planning – a specific visualization exercise used by businesses and the government to plan for multiple possibilities at once. Park administrators at both the national and regional level had just developed climate change response plans lauding the value of scenario planning, which has a flexibility they considered well-suited to the variability of climate change. There was also a sense of urgency from the top, as Director Jonathan Jarvis of the National Park Service (who served as superintendent of Wrangell-St. Elias National Park in Alaska for five years) wrote in the response plan, “I believe climate change is fundamentally the greatest threat to the integrity of our national parks that we have ever experienced.”

With funding in hand, Winfree enlisted collaborators at the Scenarios Network for Alaska & Arctic Planning (SNAP) at the University of Alaska Fairbanks, who used data from global climate models to project best, worst and medium-risk climate scenarios for each of the state’s 23 national parks, which account for 75 percent of the nation’s national parks by area. The team then organized five workshops across the state over two years and invited park employees, community members and staff from partner agencies like U.S. Fish and Wildlife Service to participate.

In these workshops, participants discussed and outlined the many “futures” that could emerge for Alaska’s parks with climate change, like having more forest fires or losing buildings to melting permafrost. Based on these futures, participants brainstormed preemptive decisions which park staff could make right now to lessen these impacts. The exercise was meant to empower staff with the ability to confront climate change in a clear, actionable way.

Winfree is now busy whittling down a list of 400-500 suggestions of proactive steps that park staff can take in the short term posed by workshop participants. The Alaska region of the National Park Service will soon publish five reports on the process, and debut an educational booklet in all of the state’s national parks this summer to show how climate change is already impacting the parks. They also collaborated with the federal park service on a scenario planning handbook to aid other parks around the country in thinking proactively. Winfree hesitates to discuss the next steps, though, because funding for climate change preparation has dried up at the federal level. For the time being, he says the workshops have succeeded in introducing the concept of climate change planning to employees and hopes they will transfer these skills back to everyday decision-making.

“Essentially, we were doing training,” said John Morris, who is an interpretation specialist with the Alaska region of the National Park Service and was part of the lead team for the scenario planning project. “Scenario planning will really work best as a tool for local managers to use with their communities and stakeholders as time goes on. We’ve built a community of several hundred people now in the Alaska region who are at least familiar with the process.”

These steps are the first sign of a proactive approach to climate change by Alaska’s National Park Service, and characterize a new way of thinking about park management in times of change. “I’m so glad that more and more land managers are not being asked to conserve in terms of imagining a static universe but are being told to take climate change into account in their management,” said Nancy Fresco, Network Coordinator with SNAP. “I think it gives them so much more freedom to think about the world in the way that the world actually is and to find creative ways to adapt instead of being stuck in a rut.”

Decisions made in the next five to ten years will lay the groundwork for navigating climate change as it continues to impact the state. Alaska’s glaciers are receding, and a fourth of them are in national parks. Runoff from this melt could cause flooding at the base of one of Alaska’s most popular glaciers, Exit Glacier in Kenai Fjords National Park. The Denali Park Road, a dirt path carved into steep mountains and traversed by hundreds of thousands of visitors a year in Denali National Park, is shifting with thawing permafrost and subject to landslides which could increase with warmer temperatures. The park service is constructing buildings atop special pilings that can be cooled as permafrost, which is found in 10 of Alaska’s parks, starts to thaw – a necessary adaptation that cuts into project budgets. Overall, infrastructure costs will increase 10-20 percent as climate change sets in.

“Parks need to be thinking about this when they develop or repair infrastructure,” said Christine Albano, a researcher at University of California-Davis and co-author of a study showing that visitor seasons in Alaska’s parks are likely to extend with climate change, which could increase park revenue but also require more buildings and roads. “How sustainable is this infrastructure? How critical will it be in the future? Where are people likely to want to go?”

There are a handful of early success stories. Scenario planning led the National Park Service to boost the foundation of a ranger station by several feet in Talkeetna, a small mountaineering town on a river just south of the Alaska Range. Shortly thereafter, the town flooded and the ranger station stayed dry. “So the community came to us and asked, ‘What is this scenario planning stuff?” Winfree said. “What can we do to be thinking about the future?’”

It’s not surprising that scenario planning is catching on beyond the boundaries of national parks, as it offers the clearest and most effective way to plan for a variety of outcomes with a group. “In the six years that SNAP has been up and running as a part of the University of Alaska system, there’s really been huge demand for what we have to offer because these questions are burning in people’s minds,” Fresco said of the advanced modeling techniques available through SNAP. “What are the possible futures, and how can we adapt?”

In the park service, this new paradigm of accepting and planning for these futures is beginning to take hold. In 2010 at the start of the scenario planning project, Ernst was as a summer intern at Klondike Gold Rush National Historic Park. She got a sense that park employees were uncomfortable with the fate of climate change. “A lot of people in the park service were not really sure what to do with it,” Ernst said. “There was still this sort of gap between talking about it and what to do about it.” But Winfree thinks times have changed. “We’ve been doing that thinking for several years right now and it’s becoming more the norm to think about change than to think about the conditions being static,” he said.

Editor’s note: This post is part of a mini-series in which Scienceline reporters write on location from around the globe during winter break. See related posts for a story on how the Thames Barrier in London will weather climate change and check back this week for a report on putting radio collars on bustards in India.

Overall, this is a great summary of the climate change scenario planning the NPS has conducted in Alaska. Scenarios are not predictions of the future; they are “plausible, relevant, challenging, and divergent” possible future conditions based on the best available science and modelling. Our goal was to ask “what if?” questions, and then make sure we are prepared to meet those challenges into the future. We recognized it is important to work with a wide array of stakeholders and personnel to ensure relevant issues were addressed in creative and useful ways.