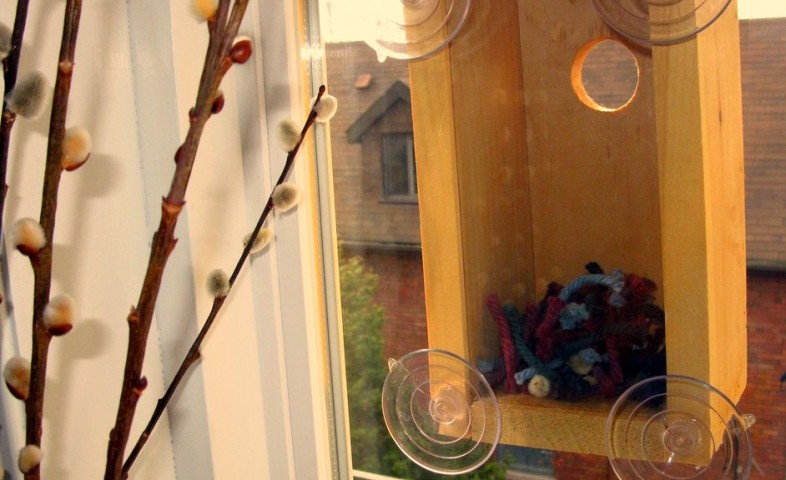 This see-through birdhouse sticks to your window and allows for optimal bird spying. [Image credit: MagickalGoodies via Flickr]

Voting for the Future of Environmental Education

The most interesting infomercial came on television yesterday. It wasn’t promoting a 20-speed super blender, a “tighten your butt while sitting” machine or even a weight loss pill. It was for a birdhouse.

Given that they fill up the wee hours of the morning on most every channel, infomercials certainly have an influence on the perhaps sleepless American consumer. In fact, the infomercial industry is expected to rise to $250 billion by 2015 — that’s 1 percent of the United State’s entire GDP. So, I was refreshed to see something as fundamental as a birdhouse being marketed.

This wasn’t just any birdhouse. It was a “My Spy Birdhouse.” For $14.99, you can literally spy on nesting wrens, nuthatches, chickadees or whatever else happens to fly inside. The design relies on a two-way mirror allowing the stay-at-home-naturalist to watch the bird as it feeds, sleeps and incubates. The buyer simply needs to suction cup the wooden house to the outside of a window, turn their head a few degrees between commercial breaks and they get a peak of gestation in action.

Although the infomercial’s enthusiastic proclamation that, “You can see in, but the birds can’t see out! You won’t disturb the birds as you spy in their little house!” may seem slightly creepy, it’s really a cool idea. It allows anyone with a window to witness, firsthand, the birthing process of another species, something a lot of people may never see otherwise. It’s almost like having a pet bird without having to do anything for it. Although you also can’t touch it, and it has no idea you exist. Other than that, it’s just like having a pet. My Spy Birdhouse allows urbanites to gain a better understanding of our natural world, something we could all use a little more of.

My Spy Birdhouse joins a few other products on the market that seek to bring nature closer to home. One creation, Philip’s Urban Beehive, “aims to bring fresh honey right to users’ living rooms” and sports a sleek figure that is not only charming, but quite handy, decor for any apartment window. Several other at home beehives have since been designed and made available for purchase — one flaunts a fresh stylish aesthetic, one’s a insect scale high-rise building and another is made from salvaged wood. Depending on where you live, you can also pick up a book on backyard wildlife and take a leap outdoors to explore the wildness within your lawn grass. One children’s activity book describes the wildlife an urban kid can expect to see in their yard and shows how to attract animals by constructing a bird feeder, a sweet hummingbird garden or a miniature house for toads and frogs.

Wouldn’t it be nice if infomercials moved toward selling new products like these? More feeders, hives and binoculars and less miracle pills, hair growth systems and discounted tummy tucks. I hope I’m not alone when I say it would be pretty fantastic to see fewer products trying to make middle class Americans feel like pseudo-movie stars and more products seeking to bring people nearer to the very real world that surrounds us.

Editor’s note: This post is part of a mini-series in which Scienceline reporters write on location from around the globe during winter break. See related posts for a story on the mangroves of Florida.

I don’t know if this is creepy or fascinating! I suppose it’s great to get children interested in nature, but not at all sure I like the idea of sticking one of these on my window – I know our cat would find it amusing though!