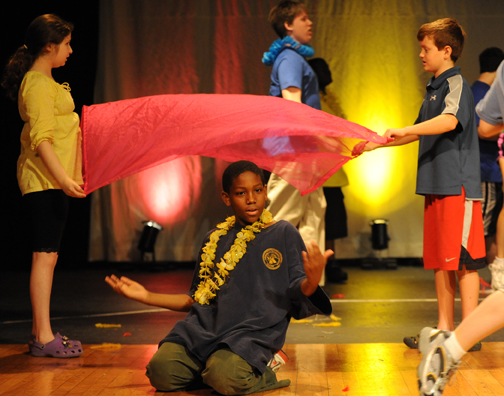 Children, many of them autistic, star in plays that address themes like community and acceptance as part of the SENSE Theater drama therapy program. [Image credit: Blythe Corbett, SENSE Theatre]

An alternative to autism?

For children with autism, diet might not make a difference

The atmosphere onstage crackles with the intensity of a final dress rehearsal. The actors pounce on their cues, feeding on their cast mates’ energy — by the last scene, the stark, dim stage practically thrums with it. One young actor strums his acoustic guitar at his autistic friend’s bedside, striving to cheer up the boy with a lively tune chronicling their friendship. In the previous scene, an angry moviegoer attacked the friend, misinterpreting the autistic teenager’s behavior as offensive.

What’s remarkable about Rule Breaking isn’t just that it’s about autism — a topic rarely addressed onstage — the bigger surprise is that many of the cast members are autistic and are portraying fictionalized versions of themselves. The actors and production team developed the play as part of New York University’s drama therapy program, one of a growing number of programs in the United States to use live theater to help children with autism.

Drama therapy has been used for years to help people cope with depression, anxiety and other psychological issues, but its use as a treatment for people on the autism spectrum is relatively new. While little formal research has been done to evaluate its effectiveness, a recent study suggests that theater-based intervention programs may improve social ability and facial recognition in autistic children.

“Youths with autism are able to do more socially than we think they can, if provided with a positive space and enriching performance opportunity,” says the study author, Blythe Corbett, a neuropsychologist and former actor who studies childhood autism at Vanderbilt University and founded the SENSE Theatre drama therapy program there. “Many of our children with autism spectrum disorder want to interact with other children but they don’t know how,” she adds. “Historically, there have been surprisingly few outlets for autistic children and adolescents to really work on their social competence.”

Corbett’s study, published in late September 2015 in the Journal of Autism and Developmental Disorders, found that autistic children who participated in SENSE were much better at recognizing faces than those who did not attend the program. She also found that participants’ brain activity was higher when they viewed a face multiple times, an essential task in play performance. “We aren’t teaching the children how to identify and remember faces, so social information is becoming more important and salient through the program,” says Corbett. “They are tuning into the social world.”

Not everyone agrees that the focus should be on teaching children to adapt to the normal world. Maria Hodermarska, a drama therapist at NYU and parent of an autistic cast member in Rule Breaking, takes issue with the assumption in Corbett’s study that social challenges from autism require treatment. “That research is making assumptions about what somebody needs to make their life better,” she says. “At NYU, we focus on social justice, instead of addressing these deficits in functioning. Drama therapy gives people who are marginalized a voice, a platform, a place to be seen and heard.”

Traditional therapies like video modeling, in which autistic patients watch and mimic video demonstrations of specific behaviors, tend to focus on teaching specific social skills, such as the best way to start a conversation. However, many autistic children struggle to internalize these skills, and often have difficulty adapting them for different situations, Corbett says. Also, these programs rarely offer participants the opportunity to practice socializing with their peers in more lifelike situations.

Programs like SENSE Theatre and the NYU Steinhardt Drama Therapy program try to offer a safe space for autistic children to practice this socialization. An autistic child in a drama therapy program can feel free to start a conversation with another participant without fearing exclusion or ridicule. Theater is particularly adept at promoting this kind of behavior, according to Corbett, because it demands risk taking and vulnerability while simultaneously encouraging openness and acceptance. In addition, the performers can rely on a prewritten script when words might otherwise escape them.

“I loved that we are not just cast members in a play but a community of people,” says Ethan Jones, a 21-year-old autistic performer in Rule Breaking. Role-playing and role-reversal exercises help strengthen the performers’ sense of empathy. By putting themselves in their partners’ shoes, participants can practice considering other people’s perspective. Jones, for example, frequently reversed roles with his mother, allowing him to consider arguments and challenges from her side. “Our relationship moved to a different level,” he says. “Somehow things are different when we are performing.”

Children in SENSE Theatre perform together in full theatrical productions. The casts consist of about 30 members, ranging from ages eight to sixteen. Of that number, roughly half are autistic. The rest are actors trained to be sensitive to the needs of their autistic peers. The plays themselves, written by Corbett, are about 45 minutes in length and often include musical numbers. They explore themes relevant to children and teens coping with autism, such as acceptance and community, but rarely discuss autism specifically.

Corbett’s research shows that children who performed in the plays became more confident in social situations unrelated to drama. When meeting new peers, they initiated more conversations and spent more time socializing in groups than before they started drama therapy. Those are crucial life skills for autistic children, according to Corbett. “We do need society to be more understanding and supportive of individuals with any disability, but at the same time, it is our responsibility to those individuals who want to participate in the social world to give them the necessary skills to be successful,” she says.

Emma Godfrey, a psychologist at King’s College in London who studies drama therapy at a number of programs in the United Kingdom, also notes significant behavioral changes in autistic children. “Drama therapy facilitated emotional development, peer relationships and social skills in participants, as well as helping to support the wider family and school system around the child,” she says. In a 2013 study, she collected feedback from parents of participants and the drama therapists who worked with them at the Roundabout drama therapy program in the U.K. The responses were overwhelmingly positive, she says. “This has helped him greatly in building his confidence and forming friendships,” reports one parent in the study. “Drama therapy has been vital for ‘A’ as it is an outlet for him to express his feelings and to understand how to deal with them.”

Hodermarska’s work at NYU’s drama therapy program takes a more community-focused approach in the production, concentrating on how people with autism and other developmental disorders fit into the world around them. During the development of Rule Breaking, the cast members were encouraged to explore their relationships with their families, caregivers, friends and broader social environment. Those involved in the production attest to tangible differences in the actors’ behavior following the nearly yearlong rehearsal period. “When we first started, one cast member would always look down at the ground, and rarely spoke,” says Rule Breaking director Nick Brunner, who studied drama therapy at NYU. “Now, he cracks jokes and laughs with everyone.” In fact, this young actor participated in the post-performance discussion, saying “it felt good to work through everyone’s disabilities.”

Jones expressed a similar opinion. “I’ve become very comfortable, after doing this for nearly a year. We just sat down in the room with the playwright and talked openly about our experiences,” he says. “It’s my chance and my choice to put my story out there.”