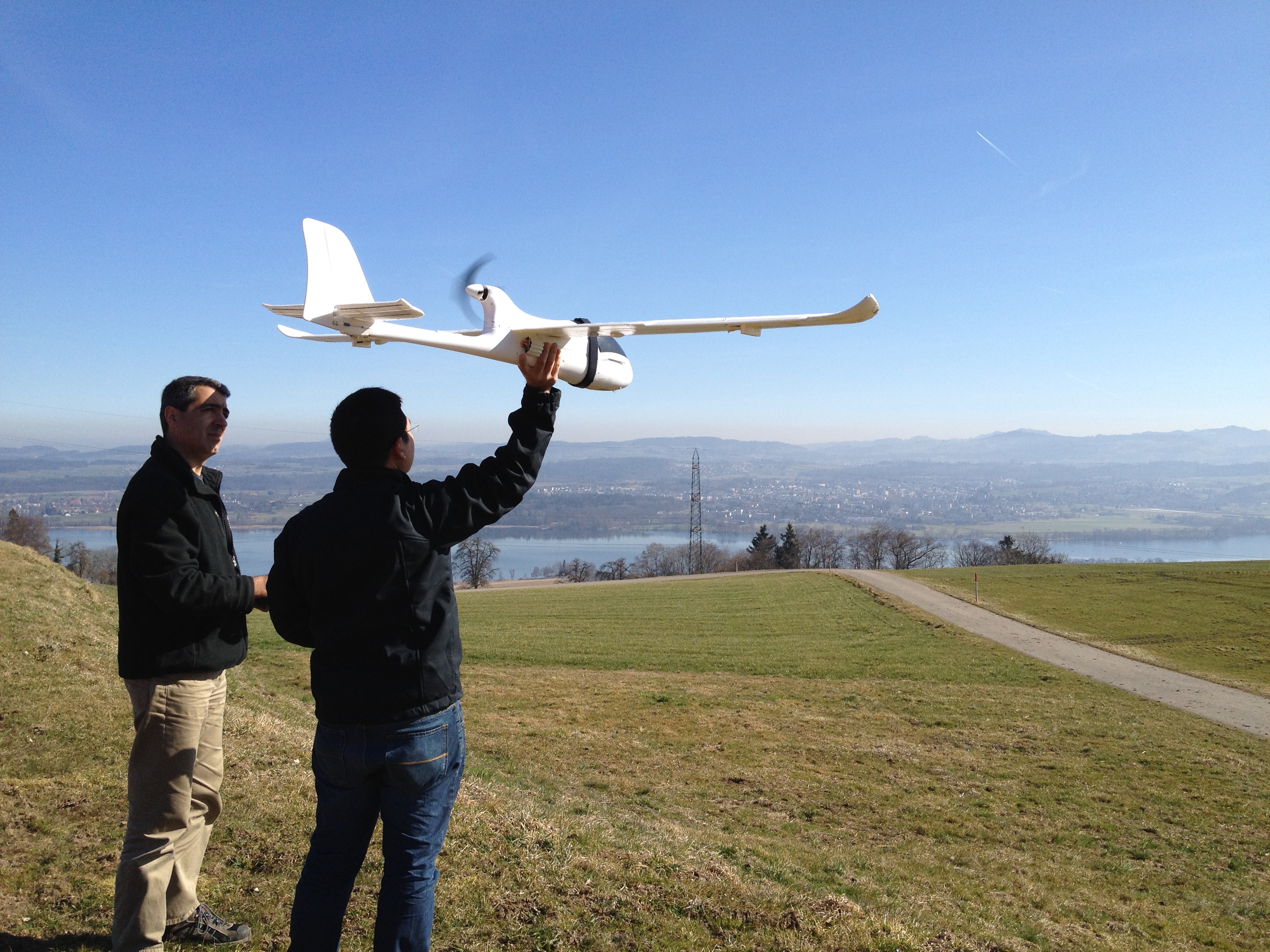 When biologists venture into the dense, humid Sumatran rainforest to study orangutans, they must fight their way through swamps and up mountains lugging heavy equipment, looking up to the canopy for any sign of the rare apes. Fewer than 7,000 orangutans live on the 180,000 square mile Indonesian island, so days can go by without a single ape sighting, making research expensive and inefficient.

Serge Wich and Lian Pin Koh felt there had to be a better way. So the two researchers modified drones to survey the rainforest from above, looking for signs of orangutans. The high resolution images helped them spot the apes and their nests tucked among the treetops. Wich and Koh quickly recognized the potential for drones in other scientific fields and in 2012 started Conservation Drones, a nonprofit group. Since then, they have helped researchers track rhinoceroses in Nepal, apes in Tanzania and birds off the coast of Australia.

“Drones can provide very high resolution images of the landscape that would be impossible to get by any other means,” says Wich, a primate biologist at Liverpool John Moores University in England. “We can use drones to get unique footage of large migrations of animals, look at behavior and do counts as well.”

After decades in which the world’s militaries were the main users of drone aircraft, scientific researchers are now taking the machines far beyond their original applications. Remote terrain and political unrest used to limit the data researchers could collect, but now drones are giving scientists new options. They’re being used in projects as diverse as hurricane monitoring, coastal mapping and shark tracking. Drones are easy to assemble and pilot, and researchers can attach more than just video cameras to gather information from afar: conservation drone payloads often also include GPS transmitters, infrared thermal cameras and pollution sensors.

“They provide a lot of flexibility in terms of payloads we can put underneath them,” says David Johnston, a conservation ecologist at Duke University who uses drones to look for sea turtles, sharks and other marine animals along the North Carolina coastline.

Even in difficult field conditions, drones are increasingly easy to launch. To get a drone airborne, researchers merely have to give it a good toss. Open source software takes care of the piloting. Routes are planned out by researchers, and the drone simply flies to each waypoint. “If you wanted to, you could fly purely preprogrammed,” says Wich.

Research drones are still just a tiny fraction of the suddenly booming marketplace for commercial drones, most of which are sold to businesses and hobbyists. Even so, scientists who use them have to follow the same rules as commercial drone operators, including applying for permission to fly in national airspace and registering with the Federal Aviation Administration, which has expressed alarm about increasingly crowded skies. “I don’t think [the FAA] were thinking about research when they lumped things together, but they did and that’s what we have to deal with,” says Johnston.

“You can’t take a bonnethead shark out for a walk on a leash,” says Johnston, so his team is using decoys — essentially fake sharks made out of plywood — to reliably calibrate their cameras for tracking bonnethead sharks off the North Carolina coast. He’s hoping the shark-tracking drones will help beach visitors feel safer in the water. “You could fly a beach and let people know if there are sharks in the area.”

Now the director of Duke’s new Marine Conservation Ecology Unmanned Systems Facility, Johnston has big plans for the center. His team will be working with local groups to map ecologically significant areas and observe sea turtles. The center will also offer courses for those interested in drone operation and certification through the FAA. A partnership with the Carteret County school district will also introduce students to drones for conservation and research.

Drones are not only cheaper to use than planes, they’re safer, Johnston says. “The more people you put in aircraft, especially over the water, you start to worry about human risk,” he says. “If we want to survey a bird colony or look at erosion on a section of beach, it’s not often cost effective to bring in an aircraft. We can fly drones essentially on demand, and that flexibility is the key for us.”

The National Oceanic and Atmospheric Administration is also using drones to keep tabs on marine environments, but they’re not focusing on wildlife. Instead, the agency has modified a drone developed by Raytheon, called the Coyote, that can be dropped into hurricanes.

NOAA often flies manned aircraft into and around hurricanes to collect wind, temperature and pressure data that is critical for generating accurate models and predictions. But the violent nature of hurricanes means NOAA can’t get data from the lowest 3,000 feet of the storms with an airplane. “It’s hard to fly in 100 miles per hour winds with 50 foot waves,” says Joe Cione, a hurricane researcher at NOAA who led the development of the Coyote. “We live down there, so we need to measure at the surface,” he says. Observing where a hurricane meets the ocean’s surface will allow researchers to better understand the mechanics of storms. “This is a critical area because this is where the storm gets its fuel.”

Though the Coyote is still in the early stages of development, Cione says the results of two test flights were promising. Cione and his team were able to pilot the drone for up to an hour on one of the flights, and he hopes the drone will be able to fly for up to 90 minutes in the future.

“Looking forward, we’re going to be able to get data sets that are simply impossible with other platforms,” Cione says. That’s important, he adds, because hurricane models are only as good as the data they’re based on; better models mean better predictions that local governments can rely on when considering evacuations and infrastructure preparations before a storm makes landfall. “To help protect lives and save property — that’s really what our mission is — to help people,” says Cione.

While boosters like Johnston and Wich say drones have tremendous potential as research tools, bureaucratic requirements have been a check on their widespread adoption, especially in the U.S. The FAA’s restrictions aim to keep drones out of airspace used by manned aircraft, but sometimes the regulations don’t make sense for research sites. “If you want to fly in Manhattan, that’s a different matter,” says Wich. “But if you want to fly over large, remote corn fields in Iowa and the farmer’s fine with that, you should be able to fly there. Regulations need to be proportional to the risk.”

To develop proportional regulations, the FAA has established six test sites around the country. These test sites allow researchers to fly their drones in safe skies and allow the FAA to evaluate potential rules for drone operators. “We want to make sure we have safe airspace,” says Rose Mooney, executive director of the Mid-Atlantic Aviation Partnership (MAAP), a test site based at Virginia Tech. Mooney recently spoke about the test site program at the 2016 American Association for the Advancement of Science meeting in Washington, D.C. Test sites have investigated potential rules regarding nighttime flights, flight altitude limits, and piloting drones near airports. At the MAAP test site, researchers can fly their drones out of their visual line of sight, something not allowed elsewhere. Mooney sees these flights being available to all drone pilots in about three years at the earliest. “The technology is moving quickly, but the regulatory environment is not,” says Mooney.

Despite the new online registration program for hobbyists, researchers and commercial operators must still use paper registrations that can take months to process.  “A lot of their processes are still archaic,” says Johnston. “It’s very slow, and considering today’s technology, a little inefficient.”

Wich is optimistic about the future of drones for conservation and research and sees them as the key to making every research dollar count. “There’s a completely new world opening up once drones have sensors to avoid objects,” he says. “With funding for conservation being relatively limited, we have to make the best out of the funding we have.”