Why dogs growl and light flickers

Iconicity may play a surprisingly large role in the English language 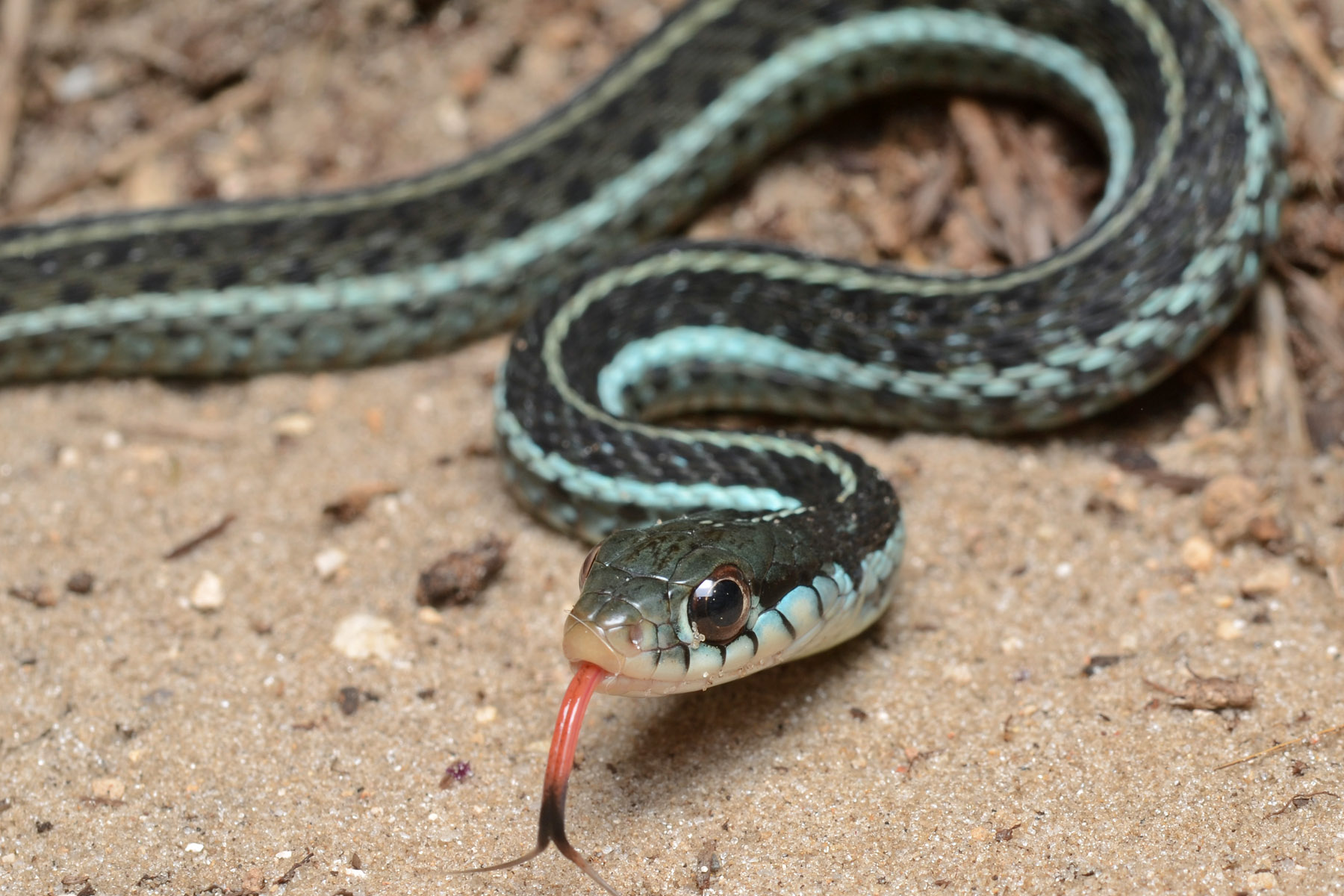 What comes to mind when you hear the word “slither?" A snake winding in the grass? Iconicity may be to blame. [Image credit: Wikimedia Commons, Creative Commons Attribution 2.0 Generic]

The world through language

Slither. The word snakes its way through your mouth, your tongue contorting, winding the word towards the back of your teeth. Ssssssslllither. It slides out, serpentine. Slither. The word sounds like what it means.

This is iconicity. Some languages, such as Japanese, are filled with words that directly evoke their meanings. “Goro-goro,” for example, refers to a heavy object rolling. In English, we can clearly see iconicity in onomatopoeias, or words that describe a sound, such as “bang,” “fizz” and “vroom.” Linguists traditionally considered these onomatopoeias outliers in an otherwise arbitrary language. In English and other Indo-European languages, they assumed there was no particular connection between how a word sounds and what it symbolizes. However, new research reveals that this might not be true.

Recently, multiple studies have found that iconicity plays a significant role in the development, evolution, and acquisition of languages worldwide. Cognitive linguists suggest that so-called iconic words evolved to help describe previous experiences and memories. Other researchers have found that, when creating new languages, people frequently rely upon iconicity to effectively communicate. Studies have found that children learn iconic words faster than arbitrary ones, and iconic words play a role in connecting sound to meaning, thus improving memory. “Iconicity is everywhere,” says psycholinguist Mark Dingemanse, who studies iconicity at the Max Planck Institute for Psycholinguistics in the Netherlands. “Understanding iconicity will give us a fuller picture of language and how it works.”

Most recently, in a study published in PLOS One, researchers found that iconicity features more prevalently in English and Spanish than experts thought possible. This research adds to the mounting evidence that iconicity plays an important role in the evolution of language. A study published in Cognition found that people most frequently use highly iconic words when inventing new communication methods. In the new study, the team noted that these words tend to fall into patterns. Thus iconic adjectives, such as “sticky,” are more common than iconic nouns, and many highly iconic words — such as balloon and jelly — are learned early in childhood. Not only does this research redefine the way cognitive linguists understand the development of language, it may also have implications for treating children struggling with language-learning disabilities, according to the study authors.

Previous studies have found that children learn highly iconic words more quickly than arbitrary words. Therefore, parents and teachers may be able to exaggerate the pronunciation of a word to highlight its iconicity and make it easier to learn. “This study adds to the growing body of research that is showing that iconic effects occur in spoken languages,” says neurolinguist Karen Emmorey, who studies language cognition at San Diego State University. “Studies like this will not only help us understand how we learn language, but will also give us deeper insight into how communication systems emerge and evolve.”

Scholars have pondered the connection between symbol and meaning for centuries. Classical philosophers Plato and Socrates both questioned the arbitrariness of language, describing a “natural form” inherent to certain words. Yet cognitive scientists have dismissed a pervasive presence of iconicity in European languages, according to the PLOS One study’s co-author, Marcus Perlman, a cognitive psychologist who studies iconicity at the University of Madison-Wisconsin. Scientists regard English as the epitome of an arbitrary language, he says. However, Perlman points to examples of English words that were deemed highly iconic by participants in his study. “Waddle.” “Jiggle.” “Swift.” He notes that terms describing movement are often iconic across many different languages, as are depictions of texture — “sludge” and “mush,” for example.

While researchers have contested the proportion of iconic words in English, their presence in Japanese is obvious. The Japanese have a special class of words known as mimetics, says the PLOS One study’s coauthor Lynn Perry, who studies language cognition at the University of Miami in Florida. For example, a speaker repeats a sound to illustrate a repetitive action. So “goro-goro” represents a heavy object rolling, while “koro-koro” refers to a lighter rolling object. “Japanese iconicity might just be more obvious than in English because it exists in a separate lexicon class of words,” says Perry.

Despite this seeming scarcity of English iconic words, both Perry and Perlman suspected that they are more widespread. “English is often the target example of why languages are arbitrary, it’s taken as extreme proof of this in linguistics psychology,” says Perry. “So if we could find iconicity in the poster child of arbitrariness, we’d have really strong evidence.”

They found that iconicity exists in both languages in a systematic way — iconic words were spread throughout the vocabulary and were particularly concentrated among adjectives, while iconic nouns were rare. Also, words learned earlier in childhood were most iconic.

This study may have important implications for how cognitive linguists understand the evolution of language. “Our findings may lead to a paradigm shift in how scientists understand where languages come from,” says Perlman. “Iconicity is the very beginning of creating a spoken language. If you start by creating iconic vocalizations that can be understood by someone else, you can use that common understanding to create a word.”

Other studies similarly support the idea that iconicity played an important role in language evolution. In a paper published in Philosophical Transactions of the Royal Society B: Biological Sciences, Pamela Perniss, a psycholinguist at the University of Brighton in the United Kingdom, proposed that iconicity and arbitrariness both serve as fundamental parts of language. While arbitrariness helps speakers distinguish between words of similar meaning, such as happy, glad and joyous, iconic words, she says, allow us to discuss things beyond our immediate vicinity. “If our ancestors spotted a wooly mammoth and wanted to report this back to the group, iconicity would have allowed [them] to imitate the animal’s sound or wooly coat or great size. These cues could help activate the group’s memories, reminding them of their own mammoth encounters.”

The studies may also have implications for understanding how we learn language and for developing better methods of teaching it. “Since more iconic words can help connect a word to its meaning, we may be able to develop interventions where we exaggerate certain parts of pronunciation to emphasize iconicity,” Perry says.

Perniss concurs, saying that since iconicity helps us describe our experiences, it can help children understand how a word and its meaning interact. She cites several studies that support this, including an investigation by researchers in Japan and England. In their study, English-speaking children were presented with made-up words that strongly resembled Japanese. Some of these words were highly iconic, while others were deliberately arbitrary. The children successfully identified the meaning of the iconic, but not the arbitrary, words.

Although the researchers say they intend to dig even deeper into the role of iconicity in language, this research will not be without challenges. “We need to resist the temptation to throw away the whole idea of arbitrariness,” says Max Planck Institute psycholinguist Dingemanse. “Iconicity doesn’t undo everything we knew before.”

Dingemanse and his fellow researchers have much left to investigate. “We are barely starting to get an idea of the scale of iconicity in language,” he says. However, bourgeoning interest in iconicity bodes well for the future of our understanding of its role in language. “Even ten years ago, it was easy to feel what I was doing was marginal, but now lots of people are interested in it,” says Dingemanse. “It’s about building a cumulative science of language.”

I’ve been doing research in this area for more than 30 years. I concur that movement and texture terms tend to be highly iconic in the languages whose lexicons I’ve examined. There tends also be a lot of crossover between semantic domains. For example, terms for mastication (chewing) and deglutition (swallowing) tend to follow the iconicity of food textures closely, and gait terms often follow the iconicity of the texture of the substrate traveled upon. In addition one also often finds posture associated with these, and allied mental states. Very systematic, though the precise mappings may vary between languages.Yet the general picture is much the same, and appears to utilize physical-mechanical features mapped onto phonemic distinctive features. This may give us some hint as to how languages evolved in the first place, from the materials-processing aspects of eating foods.

the breast, despite the adverse effects that appear to be a bad of belgira performance?. The necessity is recommended, which could increase and risk of cardiovascular disease and the development of cancer cells.