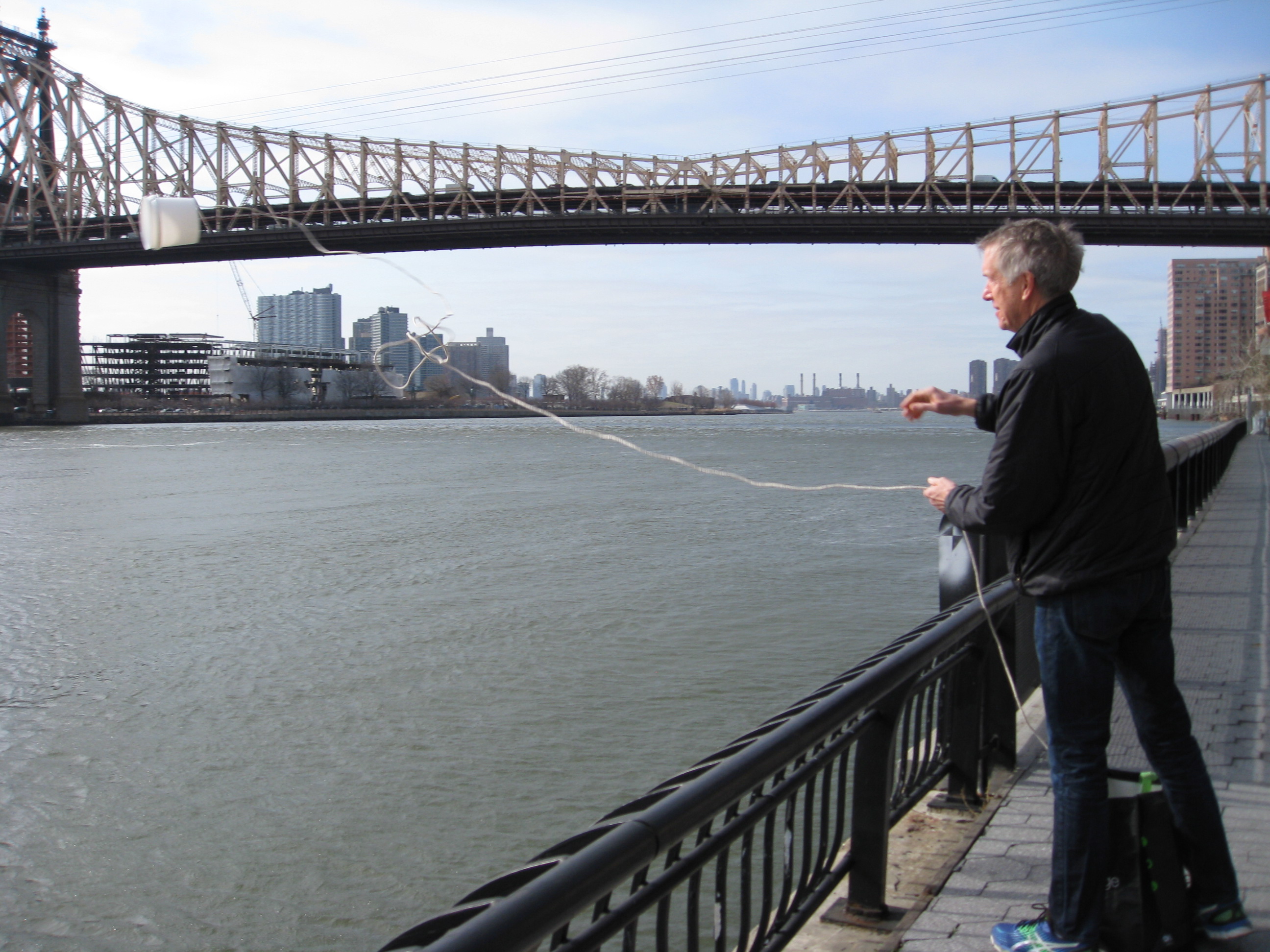 Mark Stoeckle samples the water of the East River in March as part of a weekly survey of DNA fragments floating through the estuary. [Image credit: Meghan Bartels]

Tall, craggy-faced and soft-spoken, Mark Stoeckle has thrown a bucket on a string into New York City’s East River twice every Thursday since January. As long as the current doesn’t try to steal the bucket, it’s a mundane task. The intrigue comes later, when he decodes tiny bits of genetic material in the water he has scooped.

Stoeckle, a molecular biologist at Rockefeller University, is experimenting with a relatively new technique for understanding what lives in or near a particular body of water. It’s the equivalent of scat sampling and other methods that allow ecologists to identify animals without ever seeing them. “I’d like to get people to think when they drive over the 59th Street Bridge that there are all those fish there,” he says from an office overlooking the bridge and his test site.

What he’s collecting in his bucket is environmental DNA, nicknamed eDNA by scientists who seek it. Every day, animals shed skin cells, mucus and other sources of genetic material. Stoeckle filters the chunks of DNA from water samples he collects, then has a laboratory work backward from their sequences to identify species. “If the eDNA can work,” he says, “it’s just potentially incredibly powerful.”

For scientists working in some of the most remote corners of the world, collecting eDNA has obvious advantages over trying to get genetic samples directly from wildlife. But even in the much more accessible waterways of New York City, a handful of researchers like Stoeckle hope to show that the technique can be useful. Ecologists hope it will help them understand biological communities in less time, with less effort, at a lower cost. They even dream of using eDNA to create a comprehensive, living atlas of the city’s marine biodiversity, with citizen-scientists helping to chart the yearly pulses of life teeming, unseen, beneath New York’s rivers and harbors.

First, though, Stoeckle and other researchers need to learn just how much they can trust what this hotshot method says. It creates floods of information that need to be translated, and sometimes it sees something that isn’t there, or doesn’t spot something that is.

U.S. government scientists already use environmental DNA to monitor invasive fish like Asian carp. It’s also being rallied against the spread of chytrid, the deadly fungus threatening frogs. And scientists who study the foot-long — but well camouflaged — Eastern hellbender salamander have used environmental DNA to get better population estimates.

With water sampling, you can identify a whole range of species in one go, as opposed to scat or hair samples tied to individual animals. That means eDNA paints “a more complete picture of what is present at the site, so this is very good,” says Francesco Ficetola of Université Grenoble-Alpes in France, co-author of the 2008 study that first applied the technique to ecology.

Logistically, water samples have a powerful appeal. “I think the really key benefit,” says ecologist Elise Furlan from the University of Canberra in Australia, “is that simple sampling means that you can get into some pretty remote areas.”

Cities offer their own sampling challenges: pollution, traffic, construction and less-than-romantic ambiance. And while urban critters don’t have to navigate subway delays, they’re often stressed even without being prodded by nosy scientists. “If you’re working degraded systems you don’t want to degrade them any more,” says Seth Wollney, a Ph.D. candidate at the City University of New York Graduate Center who is using environmental DNA to study Staten Island ponds. A simple water sample is “way less invasive” than survey techniques that rely on catching fish.

It’s also easier if, like marine biologist Elizabeth Alter from York College of the City University of New York, you want to study an animal that’s hard to find. Alter’s protagonist is the American eel, which she calls “an iconic species on the East Coast.” Eels are the opposite of salmon — they live in rivers and breed at sea. But dams, like those on the Bronx River, have put eel populations in trouble.

Until now, scientists have studied them with eel mops — artificial habitats, like birdhouses, that look like flat rocks having a very bad hair day. But while an eel doesn’t have to visit a mop, it does have to produce lots of mucus, which means lots of environmental DNA that could offer a clearer picture of where eels live. “We’re hoping that once we can show that this concept is working with eels, we can move on to broader tests of other species that may be invasive or fisheries concerns,” says Alter.

The biggest challenges of environmental DNA, says Furlan, come when scientists try to find something very rare in the area — usually an invasive or endangered species. Genetic tests sometimes miss that species, returning a false negative. But that doesn’t mean eDNA sampling should be discarded, Furlan says, since similar errors are even more likely with net-fishing and other conventional sampling techniques. “In general, the eDNA studies come out as being more sensitive than the traditional surveys,” she adds.

Right now, many environmental DNA projects are comparing results with traditional survey tactics, which rely on visually identifying and counting collected animals. That helps researchers understand how accurate eDNA sampling really is. “I’m missing a lot of my insects that I know are there because I catch them,” says Wollney, who is trying to compile a complete census of his ponds. But sometimes the chemical tag he attaches to the eDNA to start the genetic sequencing doesn’t grab on quite right: hence the invisible insects. Still, he believes the opportunities are worth the challenges. “They’re just hills to climb as the process and technology evolves,” Wollney says.

The errors can go both ways. Since researchers never see the creature that produced the eDNA, they can be tricked into believing they’ve found a fish that isn’t really there, Furlan notes. The poltergeist can be caused by a predator traveling with bits of an old meal, by contamination at the site or the lab, or by simple errors that happen because environmental DNA is in shabbier condition than DNA in living cells. “False positives can be a big concern with eDNA studies, and that’s not something that’s as likely to occur with traditional studies,” says Furlan. The risk can be reduced with careful sampling and analyzing methods, but there’s no way to control, say, a boat bringing environmental DNA from miles away.

Alter is tackling the twin problems of false positives and false negatives by doing some sampling in the controlled environment of the New York Aquarium. “We’re hoping that’ll be a good test of how well our molecular methods are working because we have a list of the species in those tanks,” said Alter. Similar tests have been done at the Monterey Bay Aquarium with good results.

Overall, Stoeckle is pleased about what the technique offers in the long run, despite the wrinkles left to iron out in how best to use eDNA. “I would expect in the next year there would be a much better sense of what the answers to those questions are,” he says.

Even once scientists trust the technique, there’s still the matter of understanding the results. “It’s the ‘too much data’ problem, which is true in many parts of science now,” Stoeckle says of his broad fish surveys, noting that one sample produces more than 100,000 sequences. “I’m confident in the results we have so far, but I don’t know what they mean in terms of fish biology.”

If scientists can figure out how to use environmental DNA reliably, it could be a huge boon to ecologists. That’s particularly true for those studying fish, since the same water that traps their loose bits of DNA also hides the fish from sight. Stoeckle contrasts this with bird ecologists who regularly benefit from reports by dedicated amateur birders, who can identify species by sight — or at least with binoculars.

Alter and Stoeckle both hope to use environmental DNA to build accurate maps of what fish are where and when. “The future that I imagine for this technique is giving us essentially a more detailed and a more seasonal map, like we see for birds,” says Stoeckle. Alter is interested in overlaying that map with the physical environment. “We’d like to know where are the biodiversity hotspots of New York and how do they correspond to habitat features” like temperature, saltiness and pollution, she says.

Stoeckle is excited about the possibilities of involving the public — and inspiring them, too. He notes how easy it would be for citizen scientists to get involved in the research. During his first foray into the technique, he worked with local high school students who collected and filtered water samples across the city. And he hopes to find traces of local charismatic species, like Atlantic sturgeon or humpback whale, to really inspire New Yorkers about their rivers. Late this spring, he found eDNA from a bottlenose dolphin. “We’re all interested in dolphins and whales, and it’s fun to find their DNA.”

But even workaday minnows and drab herring are enough to make sampling strolls worthwhile for Stoeckle. “Here we are next to FDR Drive and we’re going fishing, kind of,” he says. “I love that!”