New York City should put a price on single-use bags 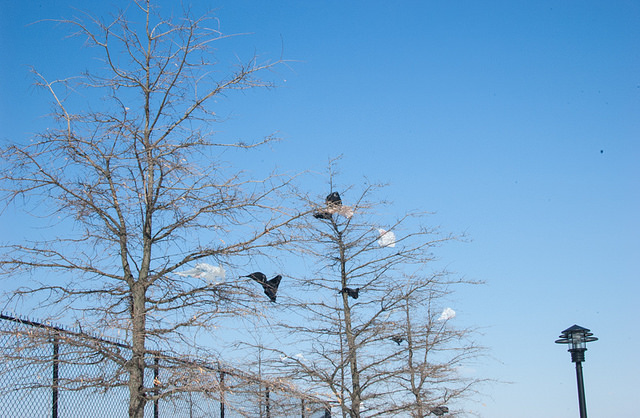 Still too many plastic bags

Enter at your own risk

When I moved from Washington, D.C., to New York City six months ago, I thought I knew what to expect: people everywhere, an unfamiliar subway system and a little smugness about bagels. But the biggest shock turned out to be at the grocery store checkout. Not sticker shock — I felt like I was drowning in plastic bags.

That’s because in 2009, D.C. implemented a 5-cent tax on single-use bags at grocery stores and other food retailers. Five cents doesn’t sound like much, but it made a difference for me. I occasionally forked over a nickel (and never really regretted it, since the tax money goes to cleaning and promoting the Anacostia River), but for the most part, I went reusable all the way. Citywide, studies suggest bag use has been cut about in half.

Putting a price on bags doesn’t just nudge shoppers loath to turn over a few extra nickels. It also changes the questions that shape checking out. Cashiers don’t ask “paper or plastic?” Instead, they ask, “do you need a bag?” Even self-checkout machines politely ask for a tally of the bags you’ve used before completing a purchase.

New York City should enact its own bag fee. The city should protect those least able to pay by maintaining the exemption for food stamp users and providing free reusable bags early in the program. It should also ensure accountability by requiring regular reports on compliance and find a good place to put the revenues, whether it’s funding the sanitation department or cleaning up our favorite urban green spaces. Creating an economic and social incentive to do the right thing will be worth it.

It turns out New York City has thought about charging for plastic bags, too. Maybe that isn’t a surprise, given how much they cost the city. According to Kathryn Garcia, the city’s sanitation commissioner, New Yorkers go through 10 billion single-use bags each year and the sanitation department spends $12.5 million in taxpayer money each year getting rid of the things.

The city’s history with paying for plastic starts in 2008, when then-Mayor Michael Bloomberg proposed a bag fee but met stiff opposition. In 2014, the City Council considered a bill that would require most food vendors to charge customers 10 cents for each plastic or paper bag, with the retailer keeping the dimes. The bill carefully built in exemptions for those receiving food assistance, and it also included an annual reporting requirement to gauge its effectiveness. Even so, the bill stalled in committee thanks to concerns it would be a regressive tax that falls too heavily on lower-income people and arguments that focusing on litter reduction would be more effective.

Bag fees are becoming increasingly popular across the country. More than 150 towns and cities had some form of a plastic bag fee in 2013, according to environmental advocacy group Surfrider. In the fall, a New York State Assembly committee began considering a bill that would tax single-use bags at 15 cents apiece. What that money would be used for isn’t specified. And in November, a group of Democrats in the U.S. House introduced a bill proposing a 10-cent tax on single-use bags, with proceeds going to the Land and Water Conservation Fund. That bill is with a subcommittee, and appears to have little support from the Republican majority in Congress. Perhaps a successful measure in the country’s largest city would energize these state and national campaigns.

Of course, there’s nothing actually stopping me from bringing the reusable bags I already own when I buy groceries. But I don’t. I need the nudges that come from being nickled-and-dimed. And I’d bet some of those coins I’m not the only one, since my D.C. grocery store was regularly full of reusable bags and I haven’t spotted a single one in New York in six months.