Enter at your own risk

In the spring of 2011, a gray seal led Jason Brougham in a new direction. After seeing the seal on a beach near his house, Brougham decided to get to know his local waterways. He bought a kayak and began paddling to and from work some mornings. But Brougham isn’t from a remote stretch of rural coastline. He lives and works in Manhattan.

“I took the seal as a sign that the water quality must be a lot better than it was in the 1970s,” when pollution was at its worst, says Brougham. From his home on the northernmost spit of Manhattan, Brougham paddles down the Hudson River for 121 blocks to reach his office at the American Museum of Natural History, where he’s an exhibit artist. He docks his kayak at the West 79th Street Boat Basin near mid Central Park.

Brougham quickly learned, though, that he might have been too optimistic about the health of the Hudson. This past summer, he paddled past a wastewater treatment plant in Harlem on his usual route to the office. “When I got to work, I heard that the plant was discharging raw sewage,” Brougham remembers. A fire at the plant had forced it to close, and as a result, untreated sewage flowed directly into the surrounding waters. “I had pretty bad anxiety about it so I washed my arms with hydrogen peroxide, and a couple days later I disinfected my boat with a bleach solution,” he says. The discharge continued for four days until the plant’s pumps fired up again.

What might surprise Brougham and many other New Yorkers who were appalled by last summer’s sewage discharge is that there’s nothing particularly unusual about it. Almost every big rainstorm causes raw sewage to flow into the city’s rivers. New York is one in a handful of older American cities — Baltimore, Philadelphia and Washington, D.C., are others — that suffer from poor sewer infrastructure leading to Combined Sewer Overflows, or CSOs. New York City has spent $1.6 billion over the last decade trying to curb CSOs, but the problem is so pervasive in the city that no one is sure whether these efforts will make much of a difference.

CSOs occur because the structure of New York City’s sewage system often can’t cope with the volume of sewage flowing through it. Under the city’s streets, thousands of drains, manholes and plumbing systems converge into a few sewage mains. These pipes can handle the 1.3 billion gallons of wastewater that the five boroughs produce on a typical day — about as much water as would be generated by a 350-year-long shower. But whenever the pipes gather more water than usual — such as during a rain- or snowstorm — the pumps at the city’s 14 wastewater treatment plants can’t keep up with the flow. Rather than backing up into streets and homes, untreated sewage systematically bypasses the plants and heads straight into the waterways.*

In this way, 27 to 30 billion gallons of untreated sewage enter New York City waterways each year via hundreds of CSO outfalls, says Phillip Musegaas of Riverkeeper, a New York clean water advocacy group. Musegaas says he finds it especially upsetting that city officials don’t effectively warn the thousands of people like Brougham who use the waterways and could encounter harmful bacteria during overflow events.

City officials counter that there are signs posted at each of the 495 sites where raw sewage might overflow into waterways. There’s even one at the boat basin where Brougham docks his kayak.

Musegaas calls the signage “crude and basic.” But Farrell Sklerov, a spokesperson for the DEP, says the city spent $1 million this year updating the signs to include pictures, since they are written only in English. The signs’ images forbid swimming, boating or fishing at such “Wet Weather Discharge Points.” This year the city also began posting general alerts about CSO events on its website — for anyone who knows to look for them. 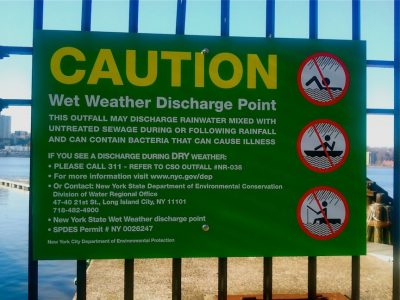 Riverkeeper began its own project to monitor water quality in 2006 after receiving a growing number of questions from the public. “People asked: ‘Can I go swimming? Can I go kayaking? Is it safe to fish?’” says Musegaas. During one week each month, Riverkeeper collects water samples from 15 sites around the city and sends them to local collaborators at Queens College and Columbia University’s Lamont-Doherty Earth Observatory for testing.

At Lamont-Doherty, microbial biologists primarily test for enterococcus, a microorganism found in fecal matter and therefore a good indicator of water cleanliness or contamination. The test results from the Riverkeeper samples often show cause for concern, according to Andrew Juhl, a researcher at Lamont-Doherty.

“One-and-a-half days out of every week we would expect unacceptable water quality at a given location,” Juhl says. “Unacceptable water quality” is water containing enough enterococcus to surpass health safety levels set by the U.S. Environmental Protection Agency (EPA). Above those levels, “people who come into contact with the water are likely to get ill,” says Juhl.

Juhl explains that all sorts of pathogens could be found in the water after a CSO event, from cholera to hepatitis. But those would be extreme cases. Studies show that typically, people who come into contact with raw sewage suffer a range of gastrointestinal distresses. Cramps, diarrhea and vomiting are the most common symptoms.

Since it’s difficult to know when CSOs are flowing, Juhl says frequent water sampling and immediate warnings are especially crucial to mitigate health issues. The city itself does the most consistent testing, collecting samples every one to two weeks, but there’s a catch. While Riverkeeper publicly posts their water sample results online within a few days of collecting them, the city’s data publication can lag weeks behind its sample collection.**

Despite what some consider a lack of sufficient public warning over CSO events, the city has been working to minimize CSO problems overall, as the EPA’s CSO Control Policy requires. Nationwide, 772 cities have CSOs, and the EPA is pushing for slow, manageable changes to sewer infrastructure to help these cities ease the problem without breaking the bank.

New York City has been chipping away at the problem by investing in what it terms “gray” and “green” infrastructure. Gray infrastructure includes building and updating storage tanks to store sewage until the wastewater plants’ pumps can catch up with the flow. Two such facilities were completed in May, 2011, one in Queens and one in Brooklyn, and the city DEP says that together the tanks can store 55 million gallons of sewage per rain- or snowstorm. That may seem like a lot, but it’s just a drop in the bucket for a city the size of New York: 5.3 billion gallons of rain hit the ground when one inch of rain falls on New York City, according to the U.S. Geological Survey.

The idea behind green infrastructure is to beautify the city and reduce stormwater runoff simultaneously by planting trees in medians, installing water-absorbing green roofs and laying down grass. The added greenery absorbs water that would otherwise flow into the sewer system, Sklerov says. The DEP thinks these “softer” solutions will be a lot cheaper, in the long run, than building and maintaining gray infrastructure.

While the DEP’s gray infrastructure investments have decreased the amount of sewage flowing into city waterways by 40 percent since 1980, it may be many years before people know how well green infrastructure works. New York launched its green infrastructure plan just over a year ago. The plan, one of the most ambitious in the nation, calls for a 40 percent reduction in current CSOs over the next 20 years.

But green infrastructure is a new enough idea that there’s very little evidence showing whether this goal is feasible. Building new medians, gardens, roofs and parks that efficiently capture rainwater is a long-term project.

If green infrastructure proves ineffectual, dramatic improvement to city waterways for recreationists like Brougham might only come after further decades of gray infrastructure investment. Despite his experience with the Harlem plant fire, Brougham continues his kayaking excursions. “It’s a risk, but I try to manage the risk by being careful about contamination,” Brougham says. “Knock on wood I have never had a health problem, not even so much as a skin rash.”

Hear Jason Brougham talk about his myriad experiences kayaking the Hudson in a recent Scienceline podcast.

**Initially, this story reported that the DEP only publishes its water sample data once a year. That was true until October, 2011, when the DEP claims to have begun posting data weekly. However, at this article’s publication, the most recent sample data posted on the DEP website is from mid-November, 2011.

There is an awesome small company in San Diego that has a super simple system that warns of a pending sewage spill. It lets the waste water district know about increased water volume in pipes via text message so the issue can be dealt with proactively. The company is Hadronex, http://www.mysmartcover.com/. They’ve done wonders for many of the waste water districts throughout the west, and might be worth a look for this area.

I loved the first correction. The system is entirely adequate as long as it does not rain. Which it does, on average, 96 days a year in NYC. I am sure this publication would call BP’s offshore systems “adequate” if they only spilled oil 96 days a year.

Seriously, if a system cannot handle the expected load 1 day out of four, it is not adequate.

The issue is cost, to design and build the necessary treatment runs about $20/gallon or $20M for every 1 MGD treated. NYC has combined sewers meaning the sanitary and storm sewer terminate at the wastewater treatment facility which is designed to treat the sanitary wastewater. Too much stormwater and the facility is hydraulically overloaded, raw sewage flows into the recieving water but it is diluted by the stormwater. The greater the storm event the more diluted the discharge; during these events the facility operates in wet weather mode which protects the treatment facility. To seperate stormwater and sanitary sewers in NYC is extremely expensive because of all of the infrastructure that is below grade, thinkl about it; water mains, electricity, gas mains, steam mains, subways lines, sewer mains, cable TV, telephone – we are talking just a nightmare of an undertaking. As an example to install a new 8″ sewer pipe in an upstate NY municipal highway right-of-way can cost $200 per lineal foot of pipe, now the pipe size in NYC is at least 4-8x’s greater, say $1M for every 1,000′ of new pipe. So everyone wants to have the cleanest waterways possible but in reality there is not enough $ in NYC to make this happen so preventing the stormwater from entering the sewers makes a lot of sense.

Warren Meyer – not all of those 96 days of rain overwhelm the system… light and moderated rains won’t. Steady can – and heavy will. That said a start has to be made. The “green” solution might as be as effective – but am sure it is somewhat… and it also helps clean the air – lower the temperature – balance the animal life – and beautify the city as well.