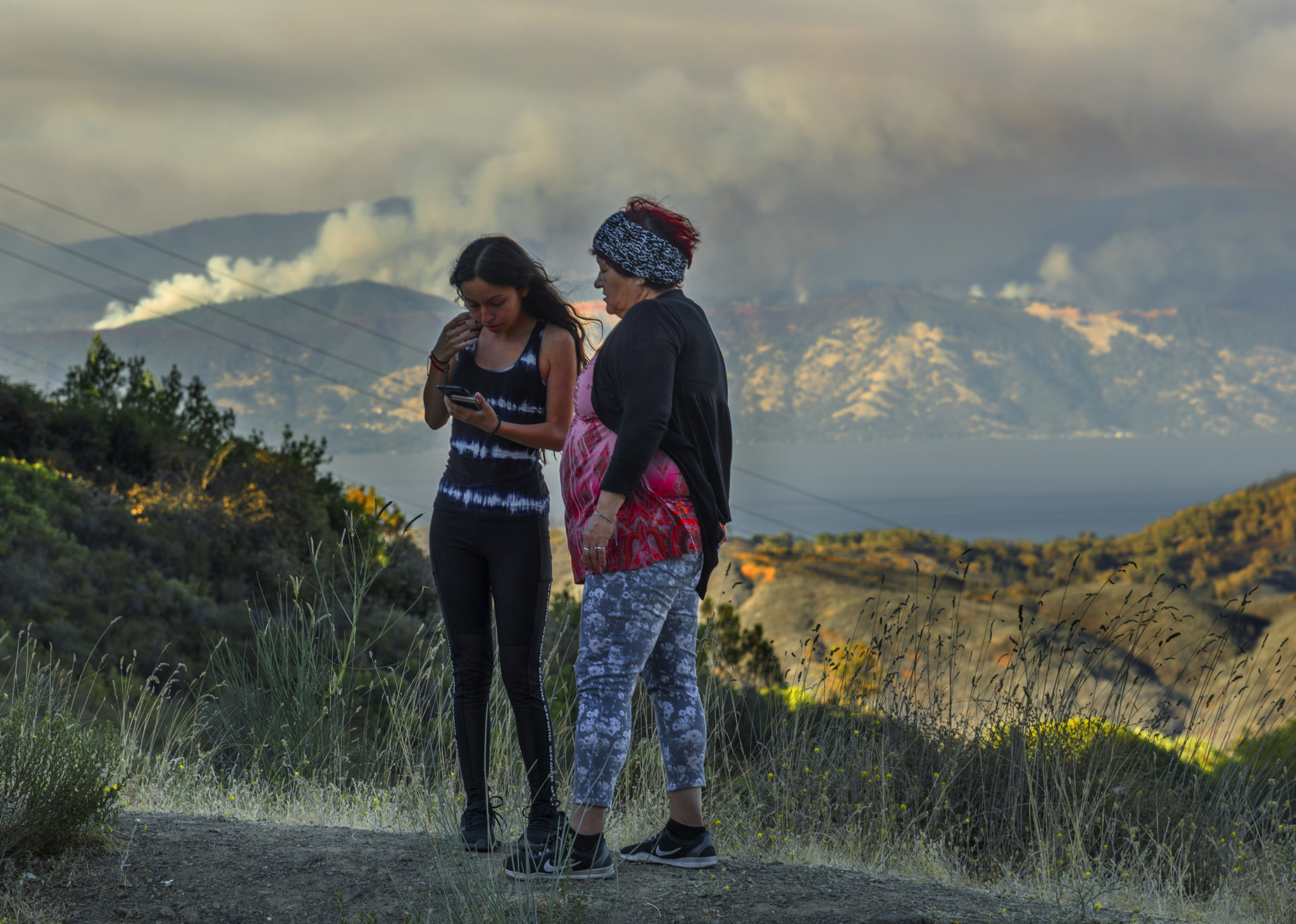 Ten-year-old Jonas Kaun witnessed the destructive potential of climate change when one of California’s biggest-ever wildfires reduced his Santa Rosa neighborhood to a foot of ash last October.

At 2 a.m., his mom, Megan, scooped him out of bed and, choking through the thick smoke, got him into the car. They left behind his favorite books, his inhaler and the family cat.

The physical tolls of climate change — uncontrollable wildfires, brutal storms and inexhaustible heat waves among them — are the stuff of nightmares for children like Jonas.  They’re also part of the reality he’ll face as an adult.

“They will be affected by climate change more than we will be,” says Megan Kaun, “and they can’t be as strong as they have to be to deal with it if they’re plagued by anxiety.”

We know a warming planet, left unchecked, will violently transform ecosystems and profoundly impact the physical and mental health of humans. But we know far less about how climate change will impact children’s inner landscapes or how professionals should help them cope with the altered world they will soon inherit, according to a study published last May in the journal Current Psychiatry Reports.

“There needs to be more research, more clinical focus on what helps them feel empowered in a world that feels out of control,” Schechter says.

One of the things we do know is how much a child’s healthy physical and mental development hinges on stability, says Susan Burke, the paper’s lead author and a senior psychologist at the Australian Psychological Society.

Water or food scarcity, rising sea levels and extreme weather put children at higher risk of mental health consequences such as post-traumatic stress disorder, depression, anxiety and phobias, according to Burke. In turn, “eco-anxiety” can stunt a child’s ability to control emotions, acquire language or perform in school, which can cascade into further mental health issues in adulthood.

Young people are already battling environmental dread, according to Burke’s study and others.

In one U.S. study, four out of five of the 10- to 12-year-olds surveyed expressed strong feelings of fear, sadness and anger about environmental problems. A majority of the survey’s 50 participants shared apocalyptic pessimism about the planet’s future.

Things that are out of their guardian’s control — for example, images from natural disaster movies or news footage of floods and fires — sap them of the comfort that their caregivers can protect them, Schechter says.

“They may not understand that if they’re living in New York City, the tsunami in Indonesia won’t affect them, that it’s very far away,” he says. “Their world becomes less safe. They wonder if it’s some kind of punishment.”

Psychiatrist Elizabeth Haase, who teaches at the University of Nevada, has begun to warn her patients about the impact of air pollution on the brain, the importance of nutrition for mental health and the potential effect of heatwaves on psychiatric medications.

On the whole, though, the psychiatric field is unprepared to guide a generation of young people through potentially crippling environmental despair and anxiety, Haase says.

“But what does it mean for children to live in a world where things will be changing faster than the human brain can absorb? There’s extremely little research,” says Haase, who is also a committee member for the Climate Psychiatry Alliance.

One of the few researchers who has studied how children respond to sustainability issues is Maria Ojala, an associate professor of psychology at Örebro University in Sweden. Over the past 15 years, her research has shown that young people — much like grown-ups — handle the looming threats of climate change in a variety of ways.

Some opt for denial, insisting that it’s an exaggerated problem, while others become utterly consumed by worry and fear. Still others channel their eco-anxiety by studying climate change or volunteering for environmental organizations. Those in the latter group best cope with environmental challenges, Ojala’s research demonstrates.

For a study published last year, 700 Swedish high school students completed questionnaires about their attitude toward climate change, pro-environment habits and conversations with friends and family about ecological issues.

Ojala discovered a strong relationship between environmental optimism and young people who quell their fears and anxiety by engaging with climate change: reading about it, discussing it with loved ones or reducing their environmental impact.

“What I have shown is that worry can be something very positive. It does not need to be related to low wellbeing and helplessness,” Ojala says. “It’s not worry or hope; it’s both.”

It just so happens that problem-solving is Megan Kaun’s parenting strategy.

This fall, Jonas and his six-year-old sister Wrenna made care packages for families affected by California wildfires. As a family, the Kauns chart household water use and attended town council meetings to support a local ban on the use of synthetic pesticides in public spaces.

“I’m trying to teach them there’s a lot of things that are upsetting, but there’s ways to fix them,” Kaun says. “You can’t just shield them from it. If there’s something you can do, that’s better than feeling helpless.”

During my research I googled “teaching children about the effects of climate change” and found a recent article regarding California’s devastating wildfires. A ten year old witness the effects of climate change was covered with a 1-foot blanket of ash from the one of the biggest wildfires California has ever seen. “We know a warming planet, left unchecked, will violently transform ecosystems and profoundly impact the physical and mental health of humans” (Marion, 2019). Yet, we’ve continued to allow native, threatened and endangered species to dwindle into (near) extinction with unexpected wildfires at the cost of not endorsing controlled prescribed fires. Instead kids are learning the importance of genetic diversity, when the species have been relocated or killed. With the EPA’s help, environmental mitigation practices can be implemented to reduce the impacts of all that we’ve degraded. The article reflects on the affects climate change (rising sea levels, warmer water temperatures, food scarcity, and more extreme weather could inflict “eco-anxiety” in children. This could induce, “higher risk of mental health consequences such as post-traumatic stress disorder, depression, anxiety and phobias, it can stunt a child’s ability to control emotions, acquire language or perform in school, which can cascade into further mental health issues in adulthood” (Marion, 2019). An important trait to continue passing along to each generation is the ability to bounce back from the negatives, to build your resilience so we have a fighting chance to save what we’ve caused.

Global warming, due to the ever-rapid climate changes, is a harsh reality to face in your own era of time. Growing up, I also had (and still have) ecological anxiety over what might happen to my world as I live on. My family and I also lost things in various different fires over the course of my lifetime (I’m 21), and the anxiety only increases with each passing day. Wildfires are one of the bigger immediate concerns to many people in California. Wildfires occur because people think to overcompensate for having cut down trees or vegetation, we should let other places grow wild and free. Instead, we should be careful about how we let nature grow around us. How we can let it grow safely and healthily, but still contain it so that it doesn’t hurt the masses. Indigenous sciences that have been around for centuries actually included a way of burning forests in a contained manner to help conserve the forest as a whole. This practice is still used in Australia, and is being considered by many other countries and cultures. We need to allows that knowledge to be used so we can help limit these disasters. Also, with the numerous other young people living with ecological anxieties: something to consider would be possibly taking that anxiety and transforming it into an action. Poetry, art, even letters to government. Anything to entice others to get involved in eco-activism will help us as a global community in the long run.